With debate in the IndyCar paddock about whether the series should revert to a spec aerokit in 2017, the series' president of competition and operations Jay Frye told David Malsher what such a move would entail. 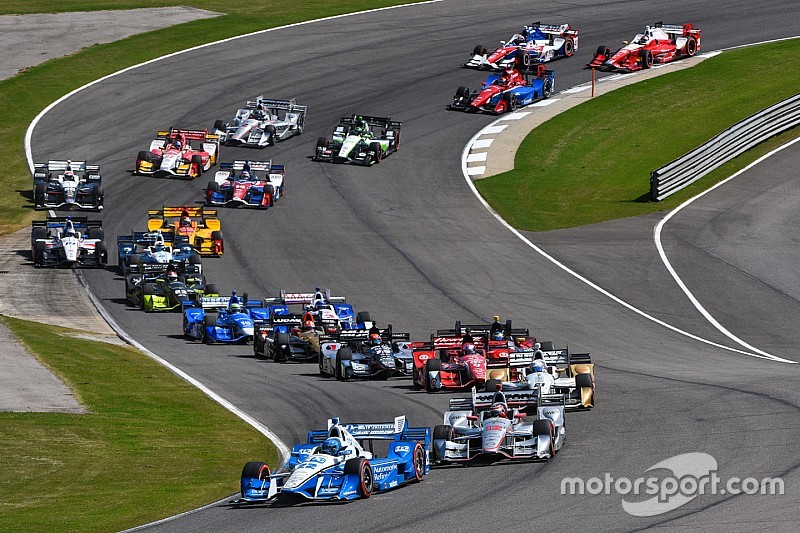 DM: How do you tackle this subject – is it something that’s voted for by teams, by manufacturers? Or can IndyCar just say, “Here’s what we’re doing”?

JF: Well, we already have aero rules in place for 2017 and ’18. There were changes allowed in three boxes this year, and there will be two more allowed in ’17 and two in ’18. We hear the same stuff that you hear but at the moment it’s just hearsay regarding anything outside of what’s already in the rulebook for 2017.

However, if we are going to deviate from that, we will need to get somewhat of a consensus. But even if we didn’t contractually have to do that, we’d still work toward consensus because it’s the right thing to do.

We always look at ways we can improve, and so we will analyze where we’re at and where we’re going and we’re currently in fact-finding mode. But it’s getting late to make changes for 2017 – it’s already almost May – and, as I say, we have aero rules for the next two years already in place.

Mark Kent from Chevrolet told us at the start of the season that he was happy that aerokits provided visual differentiation between manufacturers and also gave each manufacturer a chance to display more than just their engine-building skills. Add to that the manufacturers may be some way down the road developing their 2017 kits. So could you still negotiate a substantial rule change like switching to spec kits?

The manufacturers are always developing new things, they’ve already developed what they can for this year, so I don’t doubt they’re already looking at ’17. Having said that, we have great partners and great teams, we all want to do the best thing for the series, and a big part of that is deciding what that ‘best thing’ is. Part of our job is to help come up with a solution.

We’re trying to come up with processes to decide what’s good, what’s bad, what needs improved, what can be done in the short or long term. And we'll listen to all our stakeholders, they’re all important, and there would need to be something close to a consensus. Ultimately, we have to make the decision, but if there’s an 80 percent buy-in by them, then we’ll feel we’re pointed in the right direction.

But let’s emphasize, nothing’s been decided beyond what’s already in the rulebook for 2017. It hasn’t been decided that something different will happen. We only have four races under our belt with the 2016 aerokits, and we can talk about windtunnels and aero mapping all we want, but at the end of the day, it’s about the product on the track: what happens when you start racing?

Three team owners from Honda-powered teams have told me they’d vote in a heartbeat to go back to spec aerokits even if that meant incurring the expense of buying new parts from Dallara. But I assume you wouldn’t do what one suggested which is revert back to the pre-aerokit 2014 parts. The outsider's perception would be that IndyCar had gone backward…

No, going backward is not what we’re about. But you can still learn from history, and look back and make a comparison between 2014 and 2016 and decide what was good then, what was bad then, what’s good now, what needs improving now. By process of elimination, you can work out what the solution is for going forward. And that is part of the process we’re going through right now. But no, going back to how we were in 2014 would not be the right approach.

What are your feelings on letting the teams design, create and develop their own parts?

If you mean deregulating some areas and letting the teams build their own pieces rather than buying them, I think there are a lot of people involved who’d be very interested in that, and a lot of others who… well, they’re not dead-set against it, but they’re curious to see how that would go.

If I’m a team owner, I would like to have more of an ability to have a direct input on my team's performance by having a chance to develop my own stuff, and it’s fair to say that the teams do feel a little bit handcuffed currently. But the decision to restrict what the teams could and couldn’t do was made a few years ago and it may have been the right thing to do then.

Now, in 2016, you have to ask if it’s still necessary to restrict team development to that same level. That’s why we’re evaluating the situation, to see if what we’re doing now is the right thing. If it is, then we’ll keep doing it that way. If teams creating their own parts or following a certain developmental path can be opened up by 20 or 50 percent then we should go that way. We’ve got to keep looking into it.

So you would welcome technical ingenuity. That will obviously please a lot of people, but are you worried about costs soaring? A Roger Penske is more likely to vote for that than, say, a Dale Coyne.

Well, that’s what I’m saying; there’s a balance that would need to be found, a middle-ground where engineers are allowed to go their own way within the rules we set for areas X, Y and Z. I was part of one of the smaller teams [in NASCAR] and there were times when, because of smart people with ingenuity, we’d come up with solutions quicker or better than the bigger teams. We had the latitude to use the talents we had on the team. It wasn’t about money. It was about brainpower, creativity, outsmarting the others. Sure, our advantage didn’t always last too long, but that’s why we go race; to improve ourselves and prove ourselves.

Has consideration been given to an open-book policy, whereby teams are allowed to be inventive but then at year’s end they have to share their developments and discoveries with their rivals? In other words, a top team is allowed to keep its advantage for a year, but at season’s end, everyone has to pool their data. It means the series doesn’t feature domination by one team, year after year, nor do the best teams keep pulling ever further away from the opposition.

No. That hasn’t even been discussed. What we’re doing right now – and constantly – is looking at where we’re at, where we could go, how we could make it better, the safety factors and cost factors.

You rightly said the 2017 rules – and the 2018 rules – are in place. But what would be a realistic deadline for re-writing those rules in time for 2017 and having a spec aerokit ready?

Soon! I mean, I don’t think you can put an exact date on it, but it’s getting late already and we’ve got our work cut out for us if there was to be a major change made.

But that’s what these great teams and their partners do – you put a goal out there and they go after it. You come up with an idea and gauge their enthusiasm for it. It could still be done.