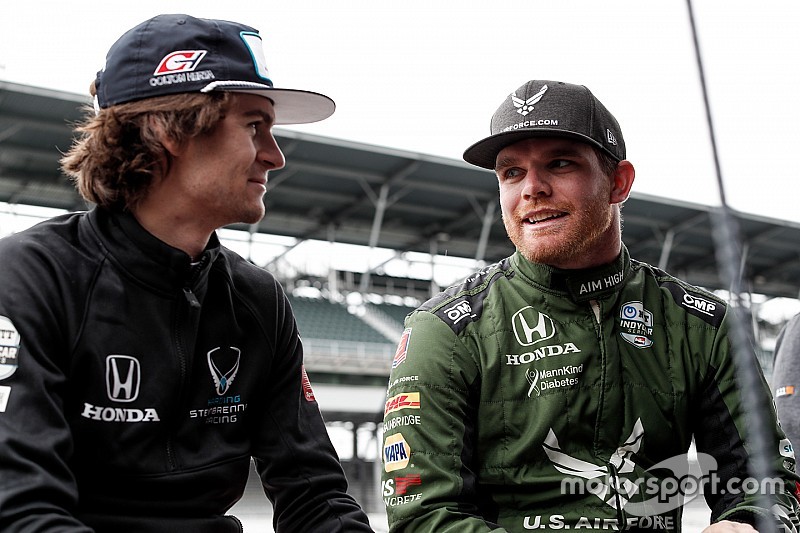 Harding Steinbrenner Racing-Honda’s Colton Herta set the pace in the Rookies and Refreshers segment of today’s test at Indianapolis Motor Speedway, while Fernando Alonso’s McLaren-Chevy made a faltering start.

Following a four-hour delay in the veterans’ session due to heavy rain, the two-hour session for the NTT IndyCar Series’ full-time rookies and also refreshers was delayed in starting and ended early due to bad weather.

However, there was approximately 90mins of green-flag running, and Circuit of The Americas winner Herta took advantage of it to turn 61 laps and emerge with the fastest speed of the session – 226.108mph. That was fifth fastest speed of the day, admittedly set with the aid of a tow from both Alonso and the Arrow Schmidt Peterson Motorsports-Honda of Marcus Ericsson.

However, Herta’s best lap without the aid of a draft, was in fact the fastest no-tow speed of the day, an impressive 223.121mph lap of the iconic 2.5-mile course.

Alonso stumbled away on his out lap at the start of the session and needed to be towed back to pits, with NBCSN reporting from McLaren that he had a duff battery. The fact that he took 45 minutes to return to the track suggested something more significant than that.

Felix Rosenqvist, who like Herta has competed at IMS in the Indy Lights series, finished in fourth place ahead of Conor Daly, who was suffering severe helmet buffeting in the fifth Andretti Autosport car.

Santino Ferrucci was sixth for Dale Coyne Racing, ahead of fellow rookie Ericsson, while JR Hildebrand, driving one of Dreyer & Reinbold Racing’s entries, was eighth.

The curtailed session means that while all the rookies have completed their Rookie Orientation Program, only Conor Daly has completed his Refresher course.

Alonso needs to turn 10 more laps at 215-plus mph, Castroneves needs three laps at 215-plus, JR Hildebrand two laps, and Oriol Servia eight laps. All four will be permitted to do so on the opening day of Indy 500 practice on Tuesday, May 14.

Alonso: Too early to judge if McLaren-Chevrolet is competitive