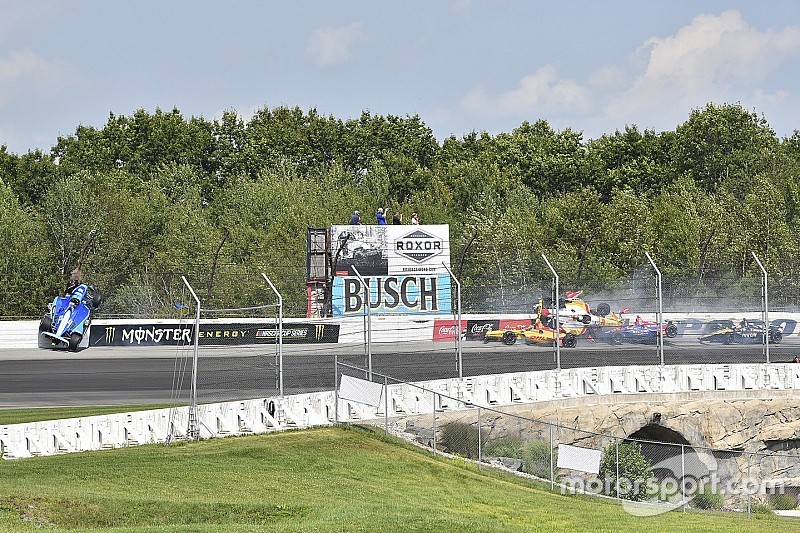 Then Sato’s out-of-control car veered back up the track, striking Rosenqvist’s Chip Ganassi Racing machine, sending it into the air, the catchfence and along the retaining wall. The Swedish rookie stepped out of his car himself, but was taken to hospital for a precautionary check-up.

However, Franchitti took to social media last night to say that the visual evidence in such situations was misleading and inconclusive.

“Glad everyone walked away from yesterday’s crash. Every angle tells a different story, on such a wide track it’s impossible to stay totally straight due to lack of lines to give the driver visual clues, add seams on the tarmac & disturbed air, both of which move the cars around.

“Looks like 2 move 1 way [Rossi and Hunter-Reay] and 1 another [Sato]. With cars running mm apart, you get the accident we saw. That’s my view from watching replays (with a reasonable amount of experience in such situations). I totally understand that the drivers involved have differing views from each other!”

Fellow four-time champion Bourdais agreed with the sentiment, despite not always seeing eye-to-eye with Franchitti, and went on to defend Pocono Raceway.

“I would not have written the story any better,” said Bourdais who took to the inside line at Turn 2 to avoid the shunt. “The only thing I would add is a little more respect, meaning space between each other would go a long way and prevent most of those accidents. Thankfully this time, nobody paid the price…

“Pocono has not caused the severity of the two catastrophic events we experienced in ’15 [Justin Wilson’s fatal collision with flying debris] and ’18 [Robert Wickens’ shunt that has halted his career due to spinal cord injuries]. Safety is not any worse there than any other superspeedway we go to. Unfortunately, the risks at over 200mph is always going to be greater but it has always been part of what we do.”

Asked by one Twitter follower about Pocono’s place on the IndyCar schedule and whether it is only driver ‘disrespect’ causing the shunts or whether the track’s characteristics were a contributory factor, Bourdais replied: “I feel it is unfair to judge the track when this happened in a straight line, fairly far from T2.

“The event was finally getting some traction and good crowd. I hope it was not the last running.”

Bourdais’ hopes that the NTT IndyCar Series will renew its deal with the 2.5-mile tri-oval Pocono Raceway was an echo of the sentiments expressed by fellow aces Will Power, Scott Dixon and Simon Pagenaud.