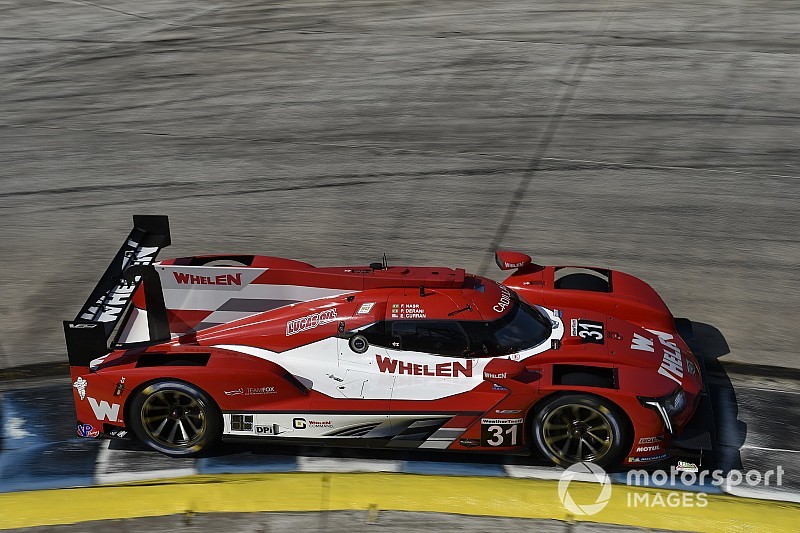 The race began under caution, but the green flag was shown after 40 minutes of running, with Tristan Nunez immediately demoting poleman Dane Cameron's #6 Acura ARX-05 to grab an early lead in the #77 Mazda RT24-P.

But it soon became clear that the Cadillac was the car to have in the tricky conditions, as Filipe Albuquerque quickly moved from fourth to second in the #5 Mustang Sampling-backed AXR car and then picked off Nunez's Mazda.

Pipo Derani was on a similar charge in the #31 AXR car, vaulting from fifth to second in the early stages before passing Albuquerque for the lead at the end of the first hour.

Both Derani and Albuquerque stayed aboard their cars at the first stops, with the pair split by less than three seconds until Derani pitted for slicks just shy of the two-hour mark.

Around 90 seconds down on the pair was the lead Mazda of Jonathan Bomarito, which benefitted from problems for both Penske-run Acuras in the early running.

Cameron and Helio Castroneves both sank in the first stints, even dropping into the GT Le Mans field, with Cameron having to make an early first stop for tire pressure changes.

The American driver made repeat visits with an apparent electrical issue and then a drive-through penalty, putting the #6 car a lap down.

Things were even worse for the #7, which runs two laps down after an early off for Castroneves and then another spin for Ricky Taylor after he had taken over the car.

JDC-Miller's lead Cadillac runs fourth, not far behind Bomarito's Mazda, in the hands of Tristan Vautier, ahead of Nunez, who slipped to fifth after an off at Turn 7.

The #10 Wayne Taylor Racing Cadillac ran seventh in Jordan Taylor's hands after two early stops under the safety car and a penalty.

LMP2 is led by Kyle Masson's Performance Tech Oreca, helped by a spin for Matt McMurry in the PR1/Mathiasen car.

BMW vs Ford in GTLM

Ford led the GTLM battle with Richard Westbrook's #67 car passing Tom Blomqvist's BMW late in the second hour, having dropped behind in the first round of stops.

Westbrook pulled some 12 seconds clear after clearing the #25 BMW, which was five seconds ahead of the third-placed #66 Ford of Dirk Muller.

The two Corvette Racing cars ran fifth and sixth, behind the second BMW, with Tommy Milner losing ground in the #4 C7.R.

Porsche's pair of works 911 RSRs fell to the rear of the GTLM pack with lamentable pace in the full wet conditions, with both cars mixed in with the GT Daytona field.

Zach Robichon seized the GT Daytona lead towards the end of the second hour after the driver of the #9 Pfaff Motorsports Porsche 911 GT3 R passed Justin Marks in the #86 Meyer Shank Racing Acura NSX, which had led up to that point.

Third place was held by Bill Auberlen in the #96 Turner Motorsports BMW M6 GT3 ahead of Christina Nielsen in the #57 MSR Acura and Ben Keating in the #33 Riley Motorsports Mercedes AMG-GT3.