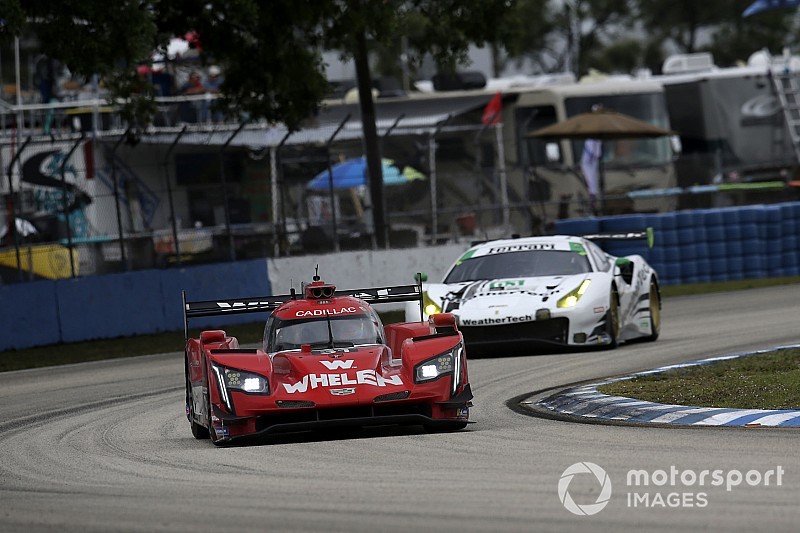 The Action Express Racing Cadillac DPi-V.Rs are running 1-2 at the halfway mark of the Sebring 12 Hours after one of their main rivals, the #55 Mazda RT24-P, was demoted by an odd-looking accident.

As the race approached the end of Hour 6, Jonathan Bomarito had just lost the lead to Pipo Derani’s #5 AXR Cadillac as they ran on slicks in the wet, when his Mazda locked up under braking for Turn 13, skated over the grass and thumped into the tire wall.

That brought out the full course caution and has dropped his co-driver Harry Tincknell down to eighth, three laps down.

Cadillacs now hold the top five positions with the two AXR cars chased by Jordan Taylor in the #10 WTR entry and the JDC cars of Simon Trimmer and Juan Piedrahita, who is a lap down.

Acura Team Penske's pair of ARX-05s continue to circulate in seventh and ninth, either side of Tincknell's Mazda, one and three laps down on the lead respectively.

The #77 Mazda, which dropped out of contention in hour three with a battery issue, returned to the track and now lies 115 laps off the lead with Oliver Jarvis at the wheel.

Scott Dixon now leads GT Le Mans in the #67 Ford GT having pulled out a substantial lead over its sister car then driven by Joey Hand, now piloted by Dirk Muller.

Right behind them is the #3 Corvette C7.R of Antonio Garcia and BMW M8 of Jesse Krohn. Tom Blomqvist is fifth in the second BMW, ahead of Fred Makowiecki who has got the #911 Porsche 911 RSR back on the lead lap thanks to getting the wave-around under yellow.

The #912 was already pitting when the yellows flew and thus missed that opportunity.

Behind the GTLM class, is the LMP2 Performance Tech Motorsports Oreca which has no opposition after the similar PR1/Mathiasen machine suffered suspension failure in the third hour.

Christina Nielsen is fifth in the Meyer Shank Racing-Heinricher Racing Acura NSX, after a strong stint from Katherine Legge who helped the car recover from a spin by Ana Beatriz.

Cooper MacNeil has the sole Ferrari of WeatherTech Racing into sixth ahead of Pat Long’s Park Place Motorsports Porsche.

After four-and-a-half hours, Philip Frommenweiler ran into the back of AIM Vasser-Sullivan Lexus RC F teammate Frankie Montecalvo as they disputed 10th place.

Frommenweiler had to pit the #14 car and take it to the paddock for repairs, but Aaron Telitz is running 11th in car #12, a lap down on the class lead.