Acura Team Penske's Simon Pagenaud is leading the Sebring 12 Hours at three-quarters distance, being chased by the one car that can stop teammates Helio Castroneves and Ricky Taylor from winning the championship. 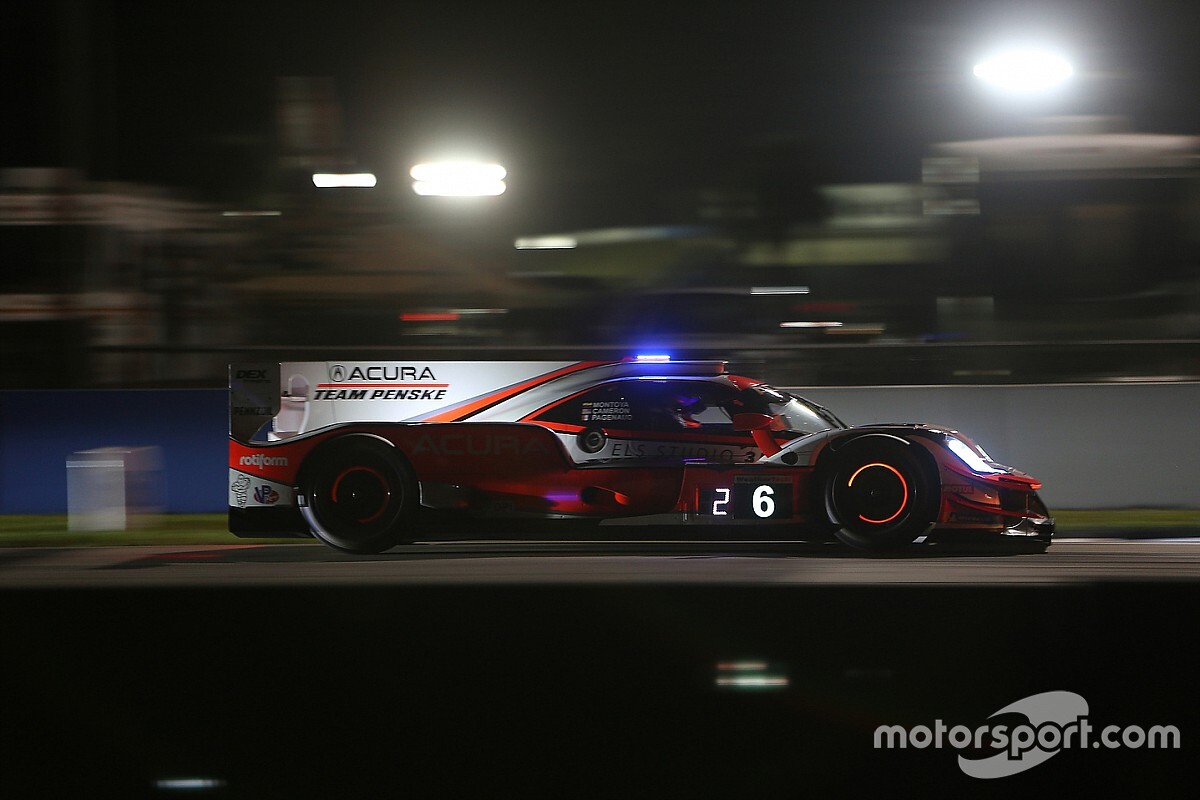 A strong stint from Sebastien Bourdais saw him drive the JDC-Miller Cadillac away from the #6 Acura of Juan Pablo Montoya in the last hours of sunlight and Tristan Vautier continued his good work as evening fell across the 17-turn 3.74-mile Sebring Raceway.

Vautier’s closest opponent was another Tristan, namely Mr. Nunez in the #77 Mazda RT24-P with the sister Mazda of Harry Tincknell running third. Montoya’s co-driver Pagenaud fell to fifth during the changeover, behind Felipe Nasr in the Action Express Racing Cadillac. The Brazilian was closing on Tincknell, who was suffering a long brake pedal in the #55 Mazda.

The full-course caution flew for the seventh time with 3h38m remaining when the #4 Corvette went into the tires at Turn 17. That sent the leaders to the pits, and both Pagenaud in the #6 Acura and Derani in the AXR Cadillac jumped to the front of the pack ahead of Jarvis in the #77 Mazda, erstwhile leader Vautier and Ryan Hunter-Reay in the #55 Mazda.

The restart saw Pagenaud break away from Derani, while Vautier got the JDC-Miller #5 ahead of Jarvis’ Mazda to take third.

The BMWs seemed to come alive as evening fell, Jesse Krohn taking the lead, and Connor De Phillippi moving into second after a couple of brilliant back and forth battles with Nick Tandy in the #911 Porsche.

The demise of Oliver Gavin’s #4 Corvette at Turn 17 brought the remainder of the GTLM field to the pits and they emerged with Fred Makowiecki in the lead ahead of Jordan Taylor’s Corvette, Laurens Vanthoor third in the #912 Porsche, followed by the BMWs of Colton Herta (#25) and Augusto Farfus.

However at the restart, Makowiecki fell back, while a rub between Taylor and Vanthoor saw the #912 Porsche also fall to the back of the class. The #3 Corvette of Taylor was thus in the lead, while Herta ran second ahead of teammate Farfus and the recovering Makowiecki.

The restart following the sixth caution saw Corey Lewis leading in the Paul Miller Racing Lamborghini but he bobbled wide and allowed Jan Heylen’s Wright Motorsports Porsche 911 GT3 R and the closely pursuing Scuderia Corsa Ferrari 488 of Jeff Westphal into first and second. That prompted PMR to pit Lewis and replace him with Madison Snow.

After a full round of pitstops around the five-hours-to-go mark, Heylen’s co-driver Pat Long was into the lead ahead of the Scuderia Corsa Ferrari now with Alessandro Balzan at the wheel. Indeed, having fallen 7.5sec behind the leader, Balzan’s attention was dominated by keeping Lawson Aschenbach behind in the Riley Mercedes. His resistance didn’t last long, and Aschenbach moved into second with 4h40min remaining.

Roman De Angelis was now wheeling the Aston Martin in fourth ahead of Pierre Kaffer in the Hardpoint Audi with Matt McMurry’s #86 MSR Acura running sixth.

The seventh caution flag and the subsequent pitstops saw Andrew Davis stay out in the Hardpoint Audi, while Westphal in the Scuderia Corsa Ferrari jumped into second ahead of Mario Farnbacher in the #86 Acura with the returning Heylen up into fourth.

Then Davis lost momentum coming onto the back straight, allowing Westphal, Farnbacher and Heylen into the top three slots.