"I expect it to be a tough challenge. It won’t be easy to be up at the front, as my opponents are very, very fast and talented and they drive competitive cars."

Munich (DE) - Alessandro Zanardi (IT) is ready to go: in one week, the BMW works driver will start his motorsport comeback season. In the 2014 Blancpain Sprint Series, the 47-year-old will race a BMW Z4 GT3 modified to his special needs and entered by ROAL Motorsport. The season opener will take place on Easter Monday, 21st April, at Nogaro (FR).

Alessandro, the 2014 Blancpain Sprint Series is about to start. How much are you looking forward to your comeback season as a BMW works driver? Alessandro Zanardi: “Very much. The Blancpain Sprint Series is a great championship and I am very proud to be part of it with BMW. BMW for me is not only just a brand; it is almost like my family. I have been driving for them and achieving special successes with them since after my accident in 2001. I am also very happy to be back in such an adventure with a great friend of mine, Roberto Ravaglia, and with ROAL Motorsport.”

How happy are you with the season’s preparation? Zanardi: “Overall I am really happy. We did a good test programme over the winter, where we learnt a lot of things. We still have some question marks about set-up or about how to use the tyre in the best possible way, but throughout the season we will learn more, no doubt about that. The lap times were more than encouraging. Performance wise we got to learn the car better with every test. Me and the car ‘coupled’ very well together, because the BMW Z4 GT3 needs to be driven in a way that seems very natural to me. 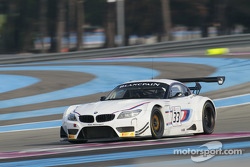 I feel comfortable in the car, but there still are a few things which we will only find out in the races. We don’t know yet what the performance of our BMW Z4 GT3 and our competitors’ cars over the distance of a race will be. Overall, I expect it to be a tough challenge. It won’t be easy to be up at the front, as my opponents are very, very fast and talented and they drive competitive cars. But we will try and do our best in order to come home from Nogaro happy.”

What would be a realistic target for the first race at Nogaro? “This is difficult to say. Let me answer this way: to be really close to the best BMWs. Because where all the other cars with the ‘Balance of Performance’ are going to be is very hard to predict. The test in Paul Ricard was the only time when we have been running with others, but is not very representative, because you don’t know in which type of conditions the others were running. Normally BMW has always been a very competitive car, and if this is the case we should not be far away from the other teams.

If we can achieve that, I think it is already a remarkable result. You also have to consider that the other drivers have more experience than me in this format. It would be fantastic if I could qualify in the top ten for the first race. But it could also be the case that I would be pretty happy if I end up in 20th. It could happen that we are not exactly where we want to be, not because we have made a mistake or have failed to do our best but simply because the others were stronger.”

What areas did you, BMW Motorsport and ROAL Motorsport mainly focus on when preparing the BMW Z4 GT3 for the season? “The first task was to get me comfortable in the car. I knew that we would not start from a blank sheet of paper, but in fact we could pick up from the previous experience in the WTCC. That allowed us very rapidly to end up with a very good solution. I feel at least as comfortable in this machine as I was in the BMW 320i in the WTCC.

“The second task was setting up the car. It is true that the engineers at ROAL Motorsport have some experience with the BMW Z4 GT3, but it was done with tyres from another brand, which they ran in the Italian championship. Therefore, at the beginning we had to learn the tyre. So we worked on the set-up of the car and this also will be one of our main challenges throughout the season. Because on every circuit you go to, you will face different problems and you need to find the perfect set-up. But we are a strong organisation and we have BMW Motorsport behind us, helping and correcting, in case we make some mistakes. All this experience should lead us to have a good car week in week out over the course of the season.”

Can you explain how you drive the car? “I brake with my prosthetic leg by moving my hip. Back in 2003 I realised very early on that to use my right prosthetic leg was probably the best and most efficient way to push the brake pedal. Therefore we took that road, we developed the system and we ended up with something which I believe is very close to what a human leg is capable of doing. Everything else I do with my hands. Not only do I have to control the steering wheel, I also have to power the car with a ring which is placed underneath the steering wheel itself.

I shift with my fingers via shift paddles. The clutch mechanism is a small butterfly mounted on the lower part of the steering wheel. In the BMW Z4 GT3 everything is electronically driven and this is an advantage compared to our previous experience in WTCC, where we had an h-pattern gearbox which I operated it with my hand. So I was getting very busy when shifting down in the braking area, where I had to operate the shift and the clutch and basically steered the car with my palm.”

How should the season go so that after it you would say that it was a good one? “It is very hard to say, because if you would have posed a similar question before the 2012 Paralympics in London, asking if I would be happy to bring home one medal, like a bronze medal, I would have said ‘Wow’! At my age, among these talented guys that are much younger than me – I would be joyful!’ But looking back, that would have been a big loss, bringing home just a bronze medal. Still – right now as we speak, to end the season with a race win in my pocket would not only be a reason to be happy, but to be ecstatic!”

Background: Zanardi lost both legs in a serious crash while racing in 2001, but only two years later he made a successful return to motorsport with BMW. Among other things, he competed in the FIA World Touring Car Championship (WTCC) for several seasons, where he celebrated four race wins. Having won two gold medals on his handbike at the 2012 Paralympics in London (GB) and completed a test in the BMW M3 DTM in the same year, he is now set to contest a full season for BMW for the first time since 2009. He will compete in a BMW Z4 GT3 in the Blancpain Sprint Series.