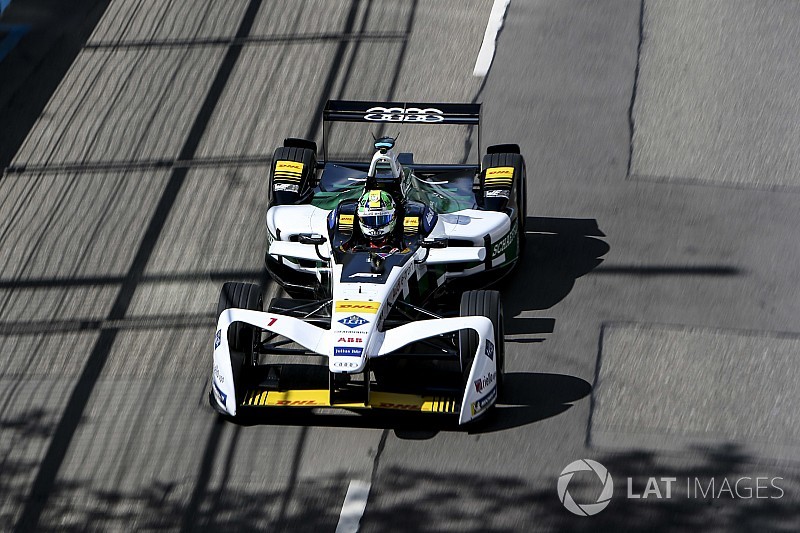 Audi’s Lucas di Grassi set the fastest time across the two practice sessions for the inaugural Zurich ePrix, the first motor racing event to take place in Switzerland since 1954.

Championship leader Jean-Eric Vergne was eighth quickest in the combined times across the two sessions, with title rival Sam Bird one place ahead in seventh.

In hot and sunny conditions at the Zurich Street Circuit, which has been built right on the shores of Lake Zurich and features the longest straight in FE history, most of the 20 drivers set their best times in the second 30-minute session.

Di Grassi finished that session 13th with his teammate Daniel Abt, 14th in overall, 16th in the second running as the Audi squad concentrated on race simulations.

Rosenqvist set fastest sectors in the opening two-thirds of the 2.465km lap but locked up dramatically at the Turn 10 hairpin and lost 0.3s.

Mitch Evans (Jaguar) had a dramatic FP2 but topped the times for the most of the session.

He was usurped by Rosenqvist after their second full-power runs and although he improved his overall fastest time, he eventually wound up third overall.

Evans also shot down the Turn 1 escape road, which is situated at the end of the bumpy start-finish straight, and then rubbed the barriers approaching the Turn 7/8 chicane in the closing minutes.

Jerome D’Ambrosio was fourth fastest overall, just ahead of his Dragon teammate Jose Maria Lopez, who was involved in incidents throughout the morning.

In FP1, he was being closely followed by Bird as the pair approached Turn 1 when the Virgin driver lost the rear of his car approaching the corner and spun into the outside wall– damaging the suspension on his car and leading to them later exchanging words in pitlane.

Lopez followed Evans down the escape road in the final minutes of FP2 but avoided an incident, before he lost his car at the same corner in the dying seconds of the session and hit the left barrier side-on, although he was able to carry on.

He hit the wall square on with the rear of his car and was able to carry on.

Oliver Turvey, 15th in the overall times, and Antonio Felix da Costa were the other drivers to set their best practice times in FP1.

Da Costa, 19th overall, did not set a timed lap for much of FP2, ending up slowest in that session, due to an issue his Andretti time is currently investigating.