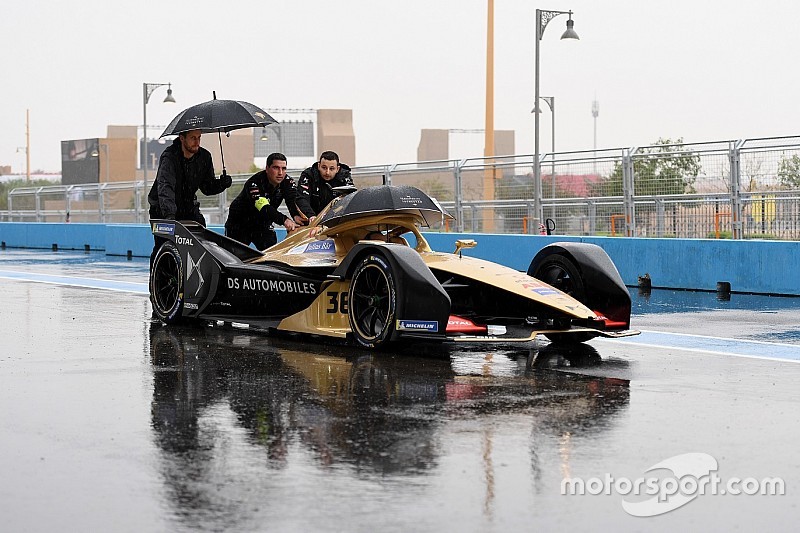 The extended second practice session for the inaugural Ad Diriyah E-Prix has been cancelled due to standing water that could not be cleared from the track.

After Saturday’s first 45-minute practice session was cancelled due to heavy rain hitting Riyadh shortly after sunrise, a one-hour-long combined session was due to get underway at 8.35 local time.

But just as the start time for FP2 approached it was announced that the session had been delayed.

But deep areas of standing water – particularly at Turns 9/10, which sit at the bottom of an undulating section of the track at the very start of the second sector, and at Turn 17 – remained.

When they returned to the pits, several drivers – including reigning champion Jean-Eric Vergne (DS Techeetah), Audi’s Lucas di Grassi and Nissan e.dams driver Sebastien Buemi – gathered in the pitlane to discuss the situation and how it could impact the rest of the event.

Trucks capable of pumping water away from the track appeared at the problem areas, but 25-minutes after FP2 was supposed to start, it was announced that the proposed session had been cancelled.

Qualifying is scheduled to get underway at 10.50am local time, with the drivers split into four groups – two sets of five drivers and groups three and four containing six drivers.

Those groups will be run in finishing order from the 2017/18 season, with the highest place drivers – Vergne, di Grassi, Bird Buemi and Daniel Abt – going out in group one.

Drivers who have entered the series for the first time are set to run in numerical order of their car numbers.

TV cameras captured Vergne proposing qualifying become a hybrid-practice session where all drivers are on track setting timed laps at the same time, while other drivers suggested the qualifying power settings be reduced from 250kW due to the lack of preparation.

Update: A 35-minute practice session is now scheduled to take place at 10.15am local time.

As a result, qualifying is expected to be delayed by a short while, although the exact new start time is yet to be announced.
Next article