Formula E has unveiled a new track layout for the third running of the Rome E-Prix, which is set to become the second longest circuit used in the championship’s history. 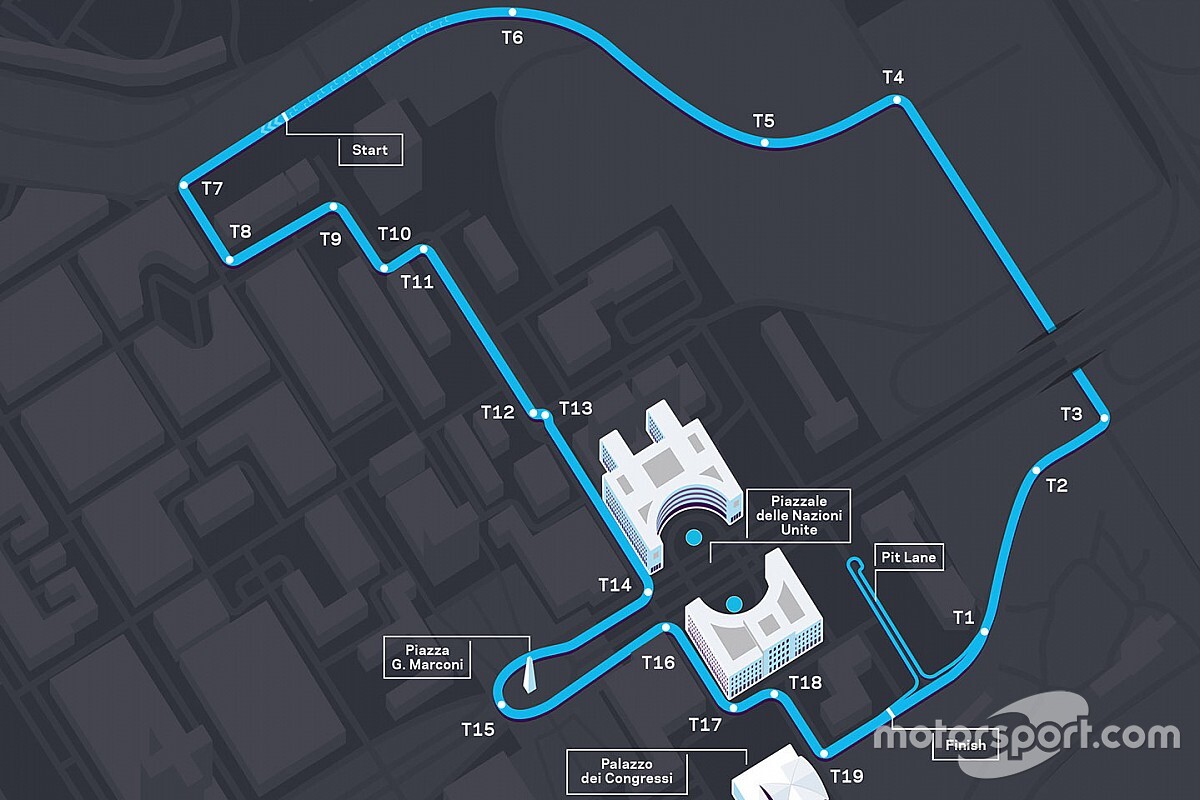 While still based in the Esposizione Universale Roma (EUR) district - where Benito Mussolini had planned to host the 1942 World Fair in celebration of 20 years of fascism - the run down the Via Cristoforo Colombo has been truncated to reduce impact on city traffic.

To extend the lap, four 90-degree corners and a chicane have been added as well as an extended straight between Turns 3 and 4. It will now run past the Palazzo dei Congressi, Piazza Marconi and ‘Square Coliseum’ local landmarks.

Renato Bisignani, FE general manager for Italy, said: "With the extension of our agreement with Roma Capitale for another five years, we have taken the opportunity to adapt our track and our event, learning from the past and building a long-term plan for Formula E in the EUR district.

“The investments we have dedicated to Rome in this difficult year demonstrate the constant vision for the future that is at the heart of Formula E.

“Rome is one of the drivers' favourite tracks and we have tried to work on maintaining the same characteristics from a sporting point of view, making the track even more exciting than it was in previous years.

FE reports that the previous Rome E-Prix in 2019 generated €60million for the economy. The championship has also said it will cover the resurfacing of the streets and a renovation of the pavement.

Rome returns for the 2021 FE season - after its postponement last year amid the pandemic - along with Valencia, Monaco, Marrakesh and a Santiago double-header as part of the second batch of races to be announced for this term.

Motorsport.com understands that agreements will all the circuits that were added came with the understanding that, should COVID restrictions ease, the public will be able to attend. The new Rome layout allows for larger spectator stands.

The permanent Vallelunga track is in line as a reserve venue should a change in circumstances render the city-street race in Rome unviable.

However, with both circuits separated by only 20 miles, they could potentially both be lost in one go as FE chief championship officer Alberto Longo confirmed to Motorsport.com.

FE is expected to announce a further seven races for 2021 in the spring, taking the total up to a record-breaking 15.

Motorsport.com understands FE is in talks to restore Sanya, New York and Berlin to the line-up while the London ExCeL Centre and Seoul could finally make their debuts.