Mitch Evans felt that his Seoul E-Prix win was "all under control", and knows he needs a "copy-paste" result to beat Stoffel Vandoorne to the 2022 Formula E title.

The Jaguar driver swept into the lead of South Korea's inaugural FE race when he dispatched slow-starting poleman Oliver Rowland off the line and dived past Lucas di Grassi into Turn 1, before the race was paused for almost 40 minutes when eight cars shunted at Turn 21.

Evans then continued on in the lead following the restart and started building a gap over Rowland. He admitted that the wet conditions suited the Jaguar machinery, as it had struggled more in the dry through the opening sessions of the weekend.

Explaining his first-lap charge into the lead, Evans explained that his move on di Grassi was borne from an "attacking mindset" given his outsider status in the title fight.

"It's been a really up and down day; this morning in the dry conditions we were actually on the back foot and we didn't really hit the ground running," Evans said.

"I was struggling with the balance and overall pace to be honest.

"The rain was a bit of a blessing just to mix things up. The start was unexpected, I just got really a good drive off the line, got Oliver and was fighting with Lucas.

"It was a bit of a spontaneous move on with Lucas into Turn 1, there was just enough space and was in a bit of an attacking mindset just considering my situation in the championship.

"After the break everything got pretty good, I was just trying to manage the gap with Oliver and obviously cover him off when he went to attack. 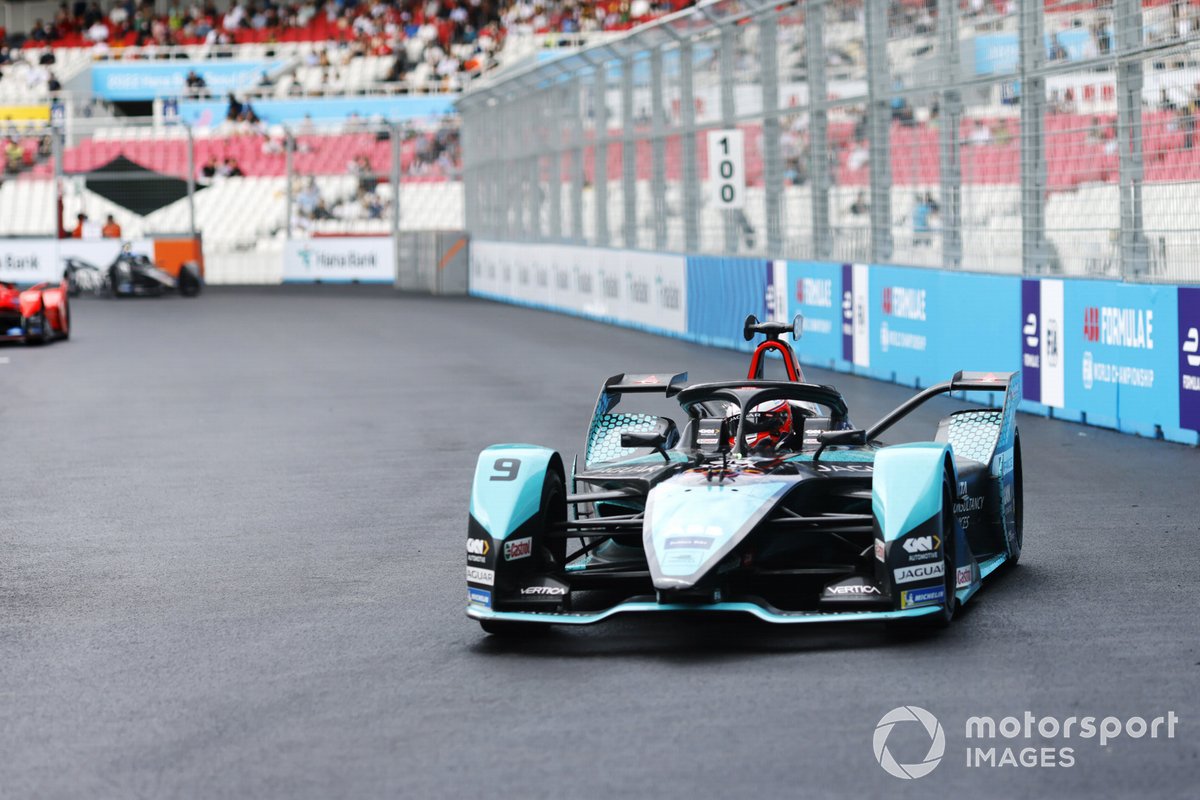 Evans' win moved him to within 21 points of Vandoorne, who finished fifth, while Edoardo Mortara was ruled out of the title chase when he retired from the race.

To overturn his deficit, Evans either needs victory in Sunday's race or to finish second with pole and the fastest lap - and hope Vandoorne struggles to score.

Thus, the Kiwi seeks a repeat of his fortunes in race one, but notes that he is at the behest of luck in the season finale.

"[I need a] copy-paste, I guess, obviously getting pole tomorrow would be helpful," he said.

"But obviously I need to win the race and him not to finish, so we need some luck.

"As you saw today, we were able to do it. He obviously had a strong race as well, so he'll be there, the Mercedes cars are working really well here.

"Nonetheless, it's going to be a really tricky day, but it's Formula E, anything can happen.

"We won't go down without a fight and I've secured second now anyway.

"So just all in tomorrow, have a bit of fun and hopefully get a big result."

Formula E looks set to achieve its long-held ambition of holding a race in Japan after reaching a deal for an E-Prix to be held in Tokyo in 2024.