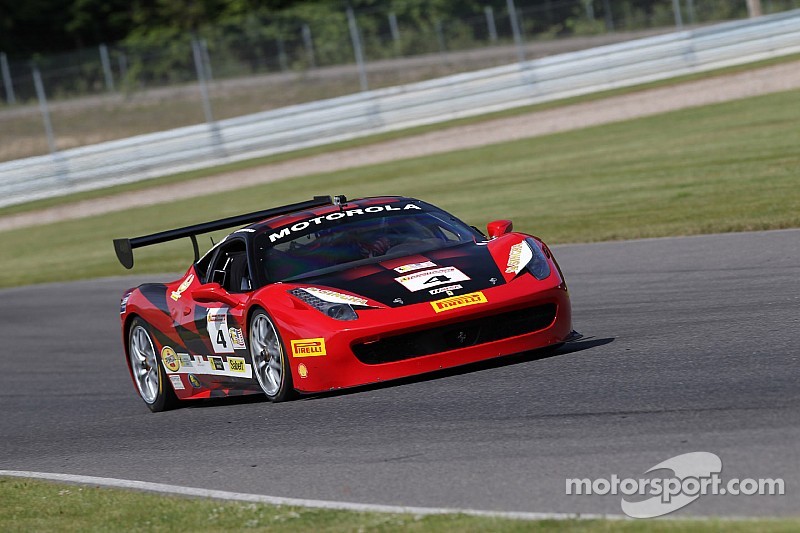 At the Ferrari Challenge race at Road America in Elkhart Lake, Wisconsin, Chris Ruud (in photo) would score twice for Scuderia Corsa as he finished second in each day in the Coppa Shell class.

"I am glad that I was again able to podium in both Saturday and Sunday's race," said Ruud. "Especially here at my 'home' track in front of a large group of family and friends. I'm also really happy to extend my lead in the points championship at the same time. Road America is one of my favorite tracks across all of North America, and this weekend did not disappoint in that regard."

Competing in the TUDOR United SportsCar Championship at the Canadian Tire Motorsports Park, the no. 63 Scuderia Corsa Ferrari 458 Italia would be forced to retire early after sustaining damage in an incident. Starting driver Jeff Westphal passed several cars in his opening stint, but sustained damage when he was caught up in an incident involving lapped GT-Daytona class cars.

The Scuderia Corsa team worked hard to repair the damage and return Westphal to the track, but after running more laps elected to retire the car from the race. Teammate Alessandro Balzan was unable to get behind the wheel of the car.

"We knew that this weekend was going to be a bit of a struggle, but to have our race end this way is really frustrating," said Westphal. "I hate it for the team because they dug and dug all weekend to make the car much better, and with no cautions in the race it would have really suited us. All we can do now is move on and try to get it back at the next race at Indianapolis."

Scuderia Corsa's technical director, Roberto Amorosi, was torn in his emotions from the weekend.

"On one side, I'm thrilled that Chris was able to continue his great season with another weekend of success," said Amorosi. "He has done an incredible job all season, and it was quite a thrill to see him stand on the podium in front of his friends and family. John Horejsi continued his improvement in the Ferrari with each session and earned his best result of the year.

"Unfortunately, we encountered some bad luck with our IMSA team in Canada. Jeff was doing a great job and two cars in front of him started an incident that he could not avoid. It's really unfortunate also because Alessandro was unable to drive and score any points. We are already working on our no. 63 Scuderia Corsa Ferrari 458 Italia to come back even strong at Indy."

Scuderia Corsa will compete next at the TUDOR Championship race at Indianapolis Motor Speedway on July 24-25. The next North American Ferrari Challenge race is September 19-21 at Watkins Glen International in Watkins Glen, New York.