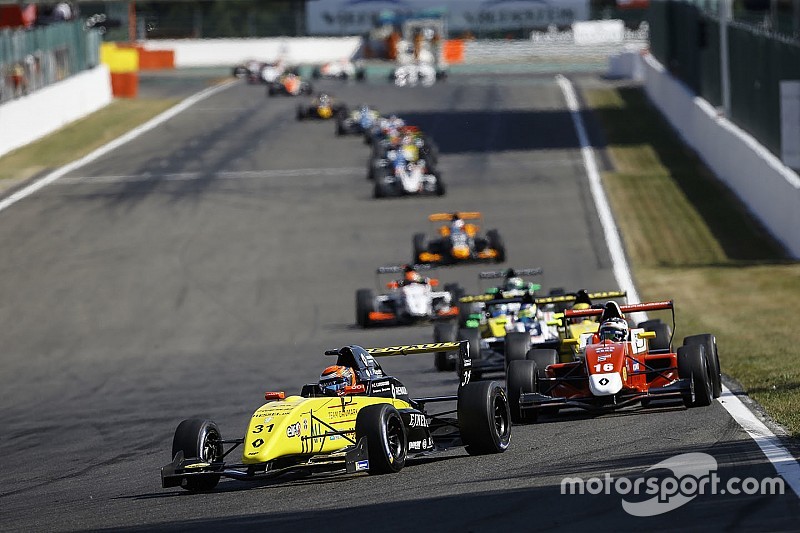 Renault is planning to scrap its current Eurocup single-seater category and transfer under the FIA’s new Regional Formula 3 umbrella for 2019.

The move would mean the end of the Formula Renault Eurocup name after 28 years dating back to 1991.

It is the latest development in a European single-seater scene that has been thrown into volatility at every level between Formula 2 and FIA Formula 4.

Renault Sport Racing commercial director Benoit Nogier, who said that the new series could be called F3 by Renault, told Motorsport.com that the company has put in a tender with the FIA to run a Regional F3 series in Europe.

“The goal is to carry on Formula Renault after 47 years and take the opportunity of this new category – Regional F3 as the FIA call it – to carry on.

“We already invest and make a lot of effort in the learning system for young drivers, and we have many in the Renault Sport Academy now.

“We want to be a part of Regional F3 – for us the pyramid the FIA has created is a perfect system for where Renault wants to be.

“We are an official candidate with the FIA and we are discussing with them.”

The FIA’s Regional F3 initiative made its competition debut in early July with the inaugural round of the Asian F3 series, which uses chassis constructed by Italian company Tatuus, the same company that has built one-make Formula Renault 2.0 cars from 2000-09 and then 2013 to date.

Nogier said that Tatuus is a contender for the planned new series, although Mygale is also working on a Regional F3 project.

“At the moment we have visited two suppliers,” he said, “and we will move on this if we get the right to promote the championship.

“We have been very surprised by the quality of the cars – it’s exactly what we think should be done.”

The current 2.0-litre Formula Renault powerplant will be replaced by a 1.8-litre turbo unit from the Megane RS, which produces 270bhp and would need only minimal modifications for racing.

The existing cars would likely race on in Formula Renault NEC, which could be renamed Formula NEC as it would not have Renault Sport promotion, but would retain the company’s technical support.

NEC organisers are hoping to join an existing European racing package for a seven-round series, with budgets in the region of €250,000 – down from the current €350-400,000 for Eurocup.

Another potential Regional F3 series has been plotted by Germany’s DMSB governing body and Italian F4 promoter WSK, but Motorsport.com understands that the DMSB has now elected instead to give its blessing to the continuation of the current F3 European Championship cars in a revived F3 Euro Series.

The BRDC British F3 Championship is also weighing up a switch to the current Regional F3 Tatuus for 2019, according to sources.