Mercedes Formula 1 driver Valtteri Bottas feels that the 2020 world championship is "drifting away" after finishing third in the Spanish Grand Prix. 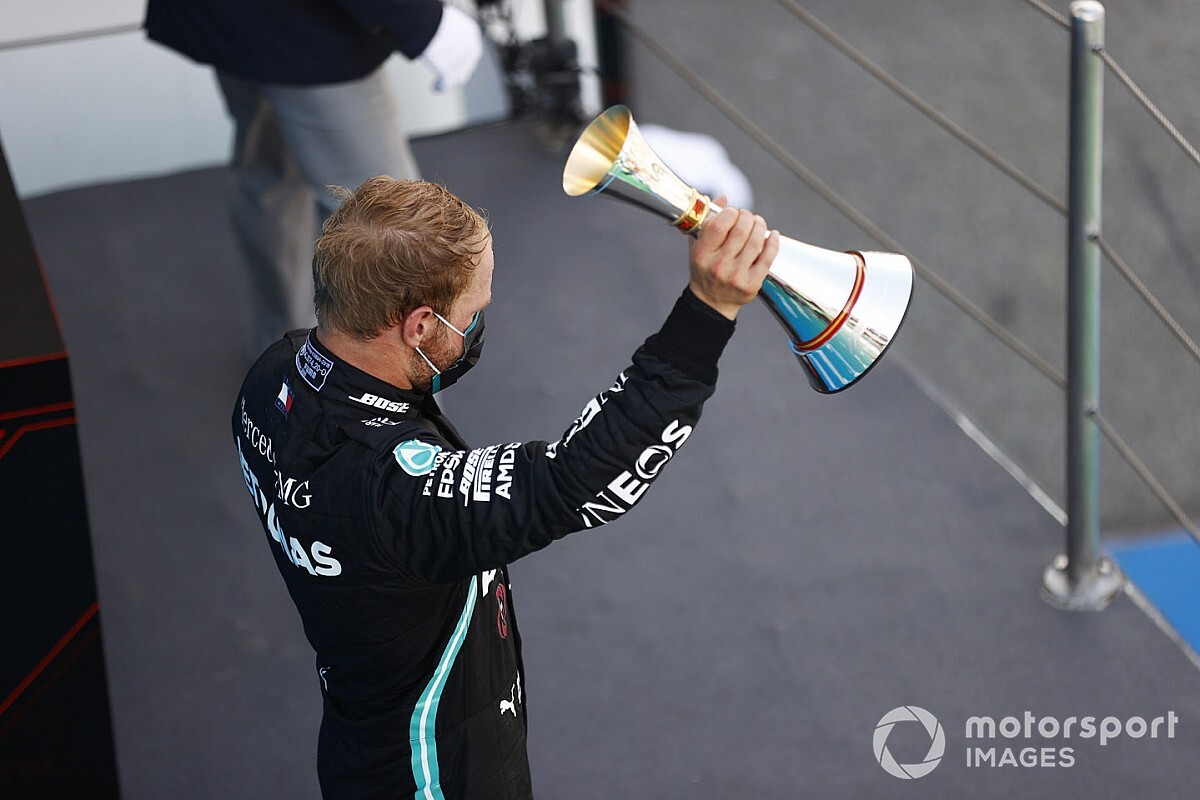 Bottas lost ground to both race winner Lewis Hamilton and runner-up Max Verstappen in the title battle, and he now lies 43 points behind his teammate, and six behind the Red Bull driver.

His day was made harder by a bad start that left him stuck behind the Racing Point of Lance Stroll, and having passed the Canadian he was never able to get onto terms with Verstappen.

A point for fastest lap provided some consolation.

Bottas won the first event of the season in Austria last month, but he has seen Hamilton steadily extend his advantage in subsequent races.

"Initial analysis is just a bad start," he said of his poor first lap in Spain. "I think the initial getaway from the line was not quite good enough, and also my reaction time could have been a bit better, so it's just not the perfect start when it was needed.

"And on this track if the guys behind get a tow from you and if you don't get the tow and if your start is not better, you pay the price, so that's it. Initially disappointed of course, it's far from ideal.

"I have no clue actually what the points' difference is, but it's way too big. And I can see again the championship drifting away. So we'll take a couple of days to look at everything, and see what went wrong. And again, move on.

"But obviously at this point, very disappointing, but yes, I know I'll always bounce back, and no doubt in Spa, as always, I'll be in full mental health, giving everything I have. But for now I just want to be somewhere else than here right now."

Asked to pinpoint what has gone wrong for him this season Bottas said he was not able to single out any factor.

"At this moment, I can't say. I had a good start in the first race, and the pace all season, every single race, the pace has been there. Qualifying has been super close every single time with Lewis, sometimes he beats me, sometimes I beat him. It's small margins.

"So I don't know the reason for now. There were couple of shitty races for me in Silverstone, with bad luck. At this point it's difficult to say. Maybe when time goes on I can say, for now I've no answer.

"So yes, nice to have a break. Hopefully, we still have many more races to go, maybe even up to 10 or something like this. I would hope so. So far, far from ideal."

Bottas said he's had no issues with the relentless pace of the season, which has seen six races squeezed into seven weekends.

"It's been okay, honestly, you know, we all had quite a long time off from F1, so we were really kind of ready and committed to go for it.

"Sometimes you might want to spend more time with many people that you're not allowed and can't, you take it because the only goal is to win the title, and I do everything for that.

"In theory, there's always possibilities, that helps, but like today is a big frustration because, obviously, the last two weekends I lost a lot of points compared to Lewis and this was kind of again, for me mentally would have been important to get more points than Lewis and Max.

"But didn't happen so then it's tough. As I said before, no doubt. I'll find that right spirit again for the next weekend and try again."