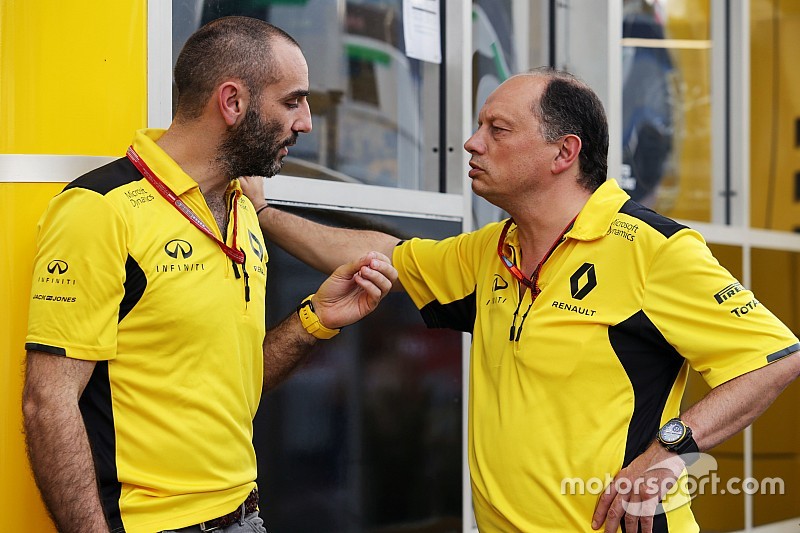 Fred Vasseur says that differences of opinion among Renault's senior management about the future direction of the Formula 1 team were behind his decision to resign from his team principal role.

Renault announced on Wednesday that Vasseur was leaving by 'mutual consent' and that president Jerome Stoll and managing director Cyril Abiteboul would now run the outfit together.

Speaking for the first time about the reasons for his decision, Vasseur said that he had come to the conclusion that Renault's chances in F1 would be hindered if there continued to be differing views about what needed to be done.

"The reason is that there was too much different vision in the management of the team, so at this stage I think it makes sense for me to leave," Vasseur told Motorsport.com in an exclusive interview.

"For the Renault team also, if you want to perform in F1, you need to have one leader in the team and one single way. If you have two different visions then the result is that the work inside the team is slow."

Vasseur said that he had made his decision to quit only last week, following post-season talks with other senior management members.

"We had a discussion straight after Abu Dhabi at the end of last season, and we tried to find the best compromise and the best organisation for 2017," he said. "I took one or two weeks off and I made my decision in the first week of January. It is much better to stop right now."

Vasseur admitted that there was some sadness to leave behind the staff members who had made great efforts last year, but he felt it would have been wrong to carry on.

"It is a small frustration, but I have a positive feeling that we did all together a good job on some points: in terms of recruitment, in terms of restructuring the company and also in track operations," he said.

"We improved a lot over the past season and some strong engineers will join the team over the next few weeks and months. So there were some positive aspects.

"But the frustration is like if you are building the foundations of a house and you stop after the first metre…. But that is fine. I've made my decision".

Vasseur also reckoned everything was in place for Renault to challenge for a top five position in the constructors' championship this year.

"Yes, the target is to be in the top five," he said. "I think that is realistic because the foundations are strong now.

"We have new guys joining the team with good experience and it will be the first car designed for the Renault power unit. The engine is also doing a good improvement. Everything is on the way.

"But now it is difficult to know where we are, and where the others will be. We will see in Barcelona and it will be difficult before to have a clear view on the situation before then. But the target is to be in the top five."

Vasseur said that he had not decided what his future would hold, but he had no doubt he would return to a racing role outside of F1.

"I am not too much worried about my future," he said. "First, I will take one week off, with my family, and then I will see.

"I will have some discussions about other projects, but it is not the right time now to think about this. I want to close properly my collaboration with Renault F1 team, and then I will think about the future. I have enough things to do to be more than busy, so it won't be an issue."

When asked if he felt F1 was over for him, he said: "To be honest it was a very good experience. I learned a lot.

"Will there be a next project that I will come back for? I don't know, we will see. But I am really passionate about racing and racing is more than just F1."