Tributes have poured in from across motorsport after Williams F1 team founder Sir Frank Williams passed away aged 79.

People from across the paddock paid their condolences to the legend, who led his team to 114 victories between 1979 and 2012, when he stepped down from the Williams board of directors.

Formula 1 CEO Stefano Domenicali said in a statement: “This morning Claire Williams called to inform me of the very sad news that her beloved father, Sir Frank Williams had passed away. He was a true giant of our sport that overcame the most difficult of challenges in life and battled every day to win on and off the track.

“We have lost a much loved and respected member of the F1 family and he will be hugely missed. His incredible achievements and personality will be with etched on our sport forever. My thoughts are with all the Williams family and their friends at this sad time.”

FIA President Jean Todt wrote: “Very sad news. Sir Frank Williams leaves a lasting impression on the history of @F1. He was a pioneer, an exceptional personality & an exemplary man. On behalf of the entire @fia Community, our thoughts are with his family, friends & @WilliamsRacing. Rest in peace, my friend.”

Williams driver George Russell wrote: “Today, we say goodbye to the man who defined our team. Sir Frank was such a genuinely wonderful human being and I’ll always remember the laughs we shared. He was more than a boss, he was a mentor and a friend to everybody who joined the Williams Racing family and so many others.

“It has been a genuine honour racing for him and being a small part of the incredible legacy he leaves behind, a legacy that will forever live on in the heart and soul of this team. Rest in peace, Sir Frank. Thank you for everything.”

Teammate Nicholas Latifi added: “RIP Sir Frank Williams. Such sad news. A huge loss for our sport and our team. It’s been an honour to represent your name on the world stage and we will continue to push hard to take the team back up the grid.”

Ann Bradshaw, who worked for the team for many years, said: “My racing family has always been Williams so can’t describe my sadness at hearing of the death of Frank. My boss, friend and inspiration for many years RIP He had a smile when he was with his beloved cars and racing drivers.”

Sky F1 pundit Karun Chandhok, who works with Williams’ Heritage division, wrote: “Goodbye Sir Frank… A truly inspirational human being whose passion for the sport was only surpassed by his tenacity. My deepest condolences to the Williams family and everyone at the @WilliamsRacing team at this time. #RIPSirFrank”

McLaren CEO Zak Brown said: “We have lost a true hero of our sport and an inspiration for so many beyond it. Sir Frank not only created a special F1 legacy but showed the power of human determination to overcome huge adversity. Thoughts with his family and the Williams team.”

A statement from McLaren added: "All at McLaren pay tribute to Sir Frank Williams.

"He was a true racer that embodied passion, ingenuity and commitment. Through immeasurable adversity, Sir Frank created a formidable team and a fearsome competitor. The Williams name will be etched in Formula 1 history and his loss will be felt by everyone in Formula 1 and well beyond.

"We send our condolences to his family and all who knew and worked with him."

The British Racing Drivers' Club said in a statement: "We are deeply saddened to learn of the death of BRDC Vice President Sir Frank Williams CBE.

"We will be forever thankful for Sir Frank’s passion & friendship.On behalf of the Club we send our thoughts to Sir Frank’s family & friends in this sad time.

Alpine Racing CEO Laurent Rossi said in a statement: "Today we lost a legend of the sport. The name of Sir Frank Williams will be forever engrained in the history of Formula 1 and an inspiration for us all.

"Starting from nothing, his passion and hard work combined with a unique talent wrote the most remarkable story of our sport. His courage and resilience in the face of the cruelty of fate persisted and continued to demand our admiration.

"All the Renault family remember our time together with emotion and pride, especially the four world drivers’ titles and five constructors’ championships we achieved together.

"The whole Alpine and Renault teams join me in expressing our sincere condolences to Claire and the entire Williams family, his friends and to the team that continues to bear his name."

Jacques Villeneuve , who won the 1997 F1 world championship driving for Williams, said Frank was as "one of a kind" and that the pair shared a deep respect for one and other.

"I was sorry to hear yesterday’s news regarding the death of Sir Frank Williams and wanted to extend my sympathy to his colleagues, friends and family," read a statement from Villeneuve.

"Frank was one of a kind, always a racer, totally committed to his team and the challenge of winning. My father knew him and raced against Williams during his career. When I was invited to join Williams I knew it was an opportunity not to miss, Frank and his partner Patrick Head having built a formidable team.

"Naturally I have complete admiration for what Frank achieved in Formula One, but also his courage in dealing with personal adversity following his road accident. He will be remembered by me as a great fighter, on and off the track." 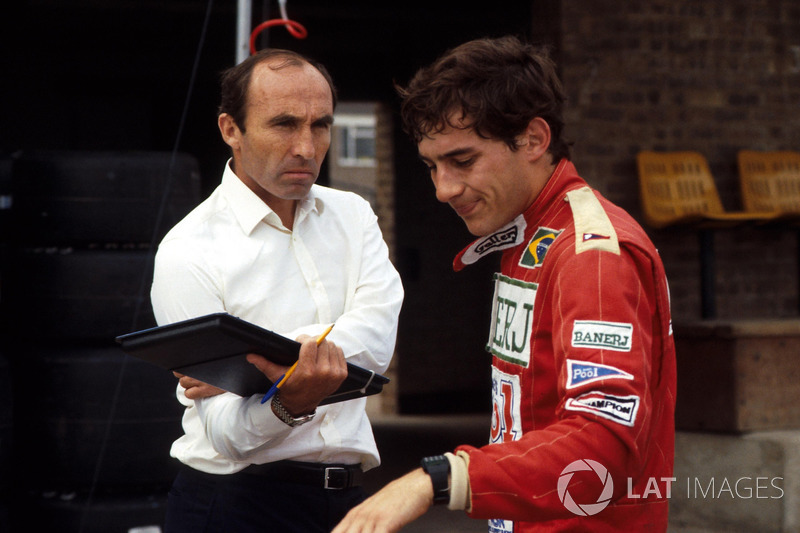