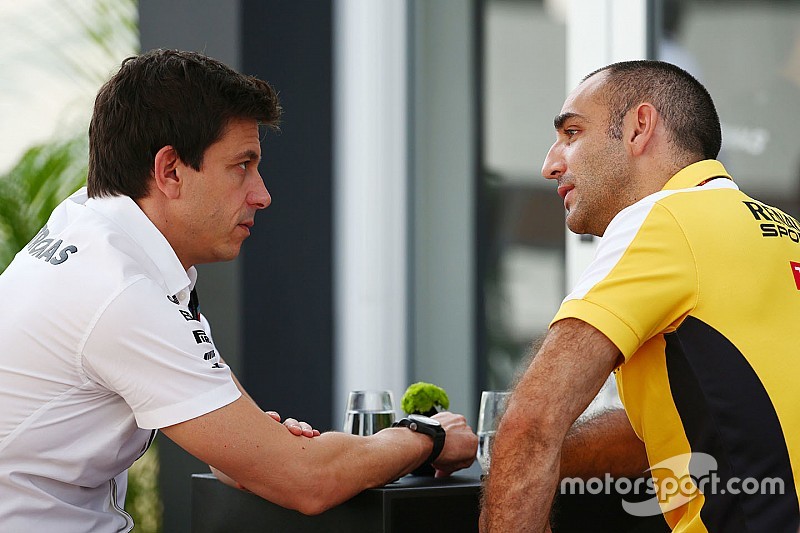 As the FIA and Bernie Ecclestone push one with plans to have an independent engine supplier in F1, Mercedes boss Toto Wolff tells Adam Cooper that the move risks causing serious damage to the sport.

The FIA's decision to issue a tender for the proposed 2017 "alternative" F1 engine has ramped up the emerging conflict between the governing body, Bernie Ecclestone and Red Bull on the one side, and basically everyone else on the other.

Although the FIA has made clear its intention to pursue the alternative route it nevertheless came as a surprise that the tender was published before the plan had gone through the process of being approved by the F1 Commission, where it looked likely to be shot down by the non-Red Bull teams.

The timing has certainly given Mercedes, Ferrari, Honda and Renault plenty to think about as they now realise that Jean Todt and Bernie Ecclestone are serious about bringing a competitive low cost engine into play for Red Bull's potential use.

It would appear that we have now passed the stage where this was a simple power play designed to force the manufacturers to cut their customer supply deal prices and/or come up with a 2016 engine for Red Bull.

Motorsport.com asked Mercedes' Toto Wolff for his thoughts on the situation.

Q: Were you surprised to see the FIA launch a tender for the alternative engine before the F1 Commission had approved it?

"No, I'm not surprised they announced it. They asked the teams if they had interest in having such an engine, and apparently some to of the teams expressed interest, and this is why they formally launched a tender, which is as predicted."

Q: But wouldn't you expect it to go to the F1 Commission, the principle would be voted on, and then there would be a tender?

"No, I believe that the FIA made it very clear what they wanted to achieve, have a discount on the engines for some of the customer teams, and that is a legitimate cause. They always said that if this was not to happen then they would seek to introduce an independent engine manufacturer, and this is just what's happening. Now it just needs to go through the formal groups to be voted on and ratified."

Q: What's your expectation about that process? If you do the numbers it looks like it won't get voted through by the F1 Commission – are you confident that it will be rejected?

"You can never be confident, because that is a very tricky topic. From the smaller teams' side I can see the benefit of having a cheaper engine, and you have to respect that position. So it's not clear cut."

"Nobody is obliged to vote with anybody, it's just a matter of what you want to have in the car, and whether contractually you can have it in the car. So you can vote on stuff which is not going to be in your car, which sounds a bit strange."

Q: Obviously you are not happy with the principle of having two types of engine. Bernie says it's happened before, but that was in transition years...

"You can hear about the conflict in LMP1. Wherever you look with a balance of performance it's just very dysfunctional. Is that what should be in F1, my personal opinion is no. But I respect every other's opinion."

Q: Is the bigger picture that the fans won't like having two sets of regulations in 2017, and that it would be damaging for F1?

"I don't see how you can balance it really in a way that it would not be damaging. What you have to do is make sure that there is some kind of engine parity between the two concepts. How do you do that?"

Q: There are revs, turbo boost, fuel capacity, weight, so many things that can be juggled around.

"If you want to give somebody a button in his hand where he can decide who wins, then if that is the agenda then it's an intelligent way of doing that."

"Well, it's not how F1 was. You can see that in many other entertainment paths, but not in professional sport."

Q: Niki Lauda has spent a lot of time with both Helmut Marko and Christian Horner this weekend. There seems to be a lot of dialogue between the two camps.

"Niki has a relationship with Helmut and Christian, I think they got along with each other personally, and that is OK."

Q: Is Christian still trying to get a Mercedes engine?

"I don't have that relationship personally so I'm not on the table..."

Q: There was an interesting comment from Matthew Carter last week when he said Lotus expects to use Renault next year, but is also prepared for Mercedes. That implied that you still have the capacity to supply a fifth team.

"Yeah, but it's completely detached from the Red Bull situation."

Q: But in terms of the physical capacity you could still do it?

Alonso set to get new engine for Sunday