Main Photos Illustrations
Previous / Kubica "will have issues" if he races in F1 - Massa Next / Is Formula E about to take off? Nissan enters series as governments get tough on emissions
Formula 1 / United States GP / Breaking news

A Honda engine failure robbed Fernando Alonso and McLaren of a solid points haul at the United States Grand Prix - but the team could take solace in the rave reviews earned by its new front wing.

This work starts at the very front of the car, as the front wing is tasked with creating the Y250 vortex - an extremely energetic spiraling airflow structure created as high and low pressure airflow collides where the flapped section meets the neutral centre section, 250mm from the car's centreline.

This is enforced by the outer section of the wing, with the design of the arched flapped section, endplate, cascades and canards all responsible for pushing flow laterally across the front tyre, reducing the drag and shaping the wake it creates.

McLaren, or more specifically Alonso, had a revised front wing design available in Austin (Vandoorne ran it briefly in FP1 for a flo-viz test), as the team continues to exploit the effect that can be garnered, improving the car's entire performance envelope.

The wing, which is part of McLaren's 2018 development package, was dubbed as "great" and a major step by Alonso and, despite Stoffel Vandoorne having only limited running with it, earned a positive reception from the Belgian as well. 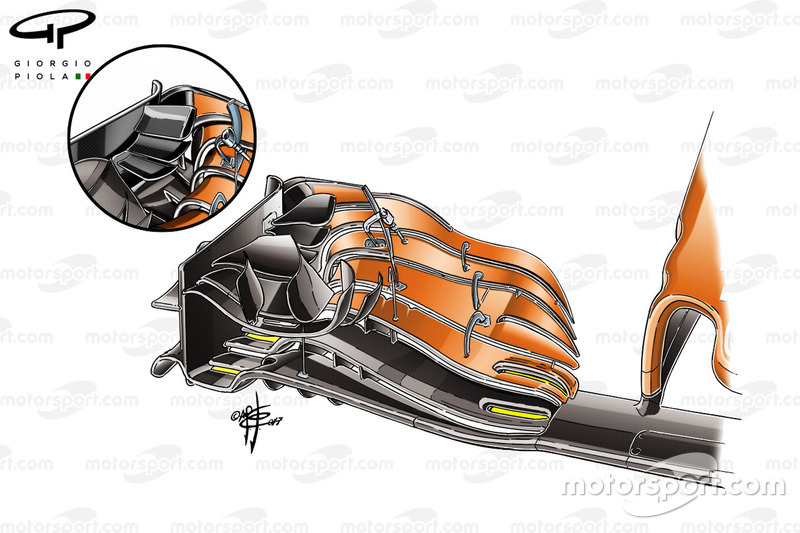 The intention of the revised wing is to optimize the two main flow structures we’ve already alluded to, with two small slots placed in proximity of the Y250 vortex - one in the secondary element of the mainplane and another in the upper element (highlighted in yellow).

This is an effort by the designers to alter its position and vorticity, inline with changes made to the bargeboards in the last few races.

The outboard section of the wing has been treated similarly, with two slots added to the inner footplate section (highlighted in yellow), injecting flow under the wing from the loaded side.

The inner fluted canards have been altered too (see inset for comparison), their shape now requiring only a single anchoring point on the inside of the endplate.

Kubica "will have issues" if he races in F1 - Massa

Is Formula E about to take off? Nissan enters series as governments get tough on emissions

Alonso unsure if he'll race in the Indy 500 again