Sainz: Brave double pass was one of my best F1 starts 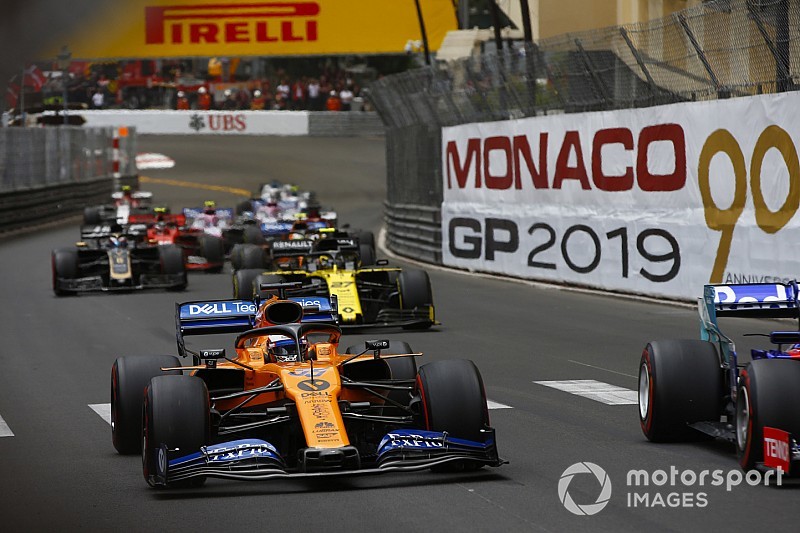 Carlos Sainz reckons he made one of the best starts of his Formula 1 career at the Monaco Grand Prix – after a brilliant first lap that included a double-pass around the Toro Rossos at Massenet.

The Spaniard had qualified ninth at Monte Carlo and got away well before getting boxed in at Ste. Devote, which allowed Alex Albon to get alongside him on the run up the hill.

But Sainz braved it out and then, as Albon backed off for the left hander, the McLaren daringly also managed to go around the outside of Daniil Kvyat too.

Reflecting on the first lap, Sainz said: "That was a really good move and I thought I had done one of the best starts of my career!"

The Toro Rosso drivers had mixed opinions about Sainz's bold effort around the outside.

Kvyat said: "I think lap one Carlos managed to do a risky move, but he managed to get ahead of me."

Albon was more impressed by what Sainz did though.

"I had a good turn one actually and I got past Carlos, but then going into turn three he was there to my right so I couldn't go to the right even though I wanted to," said the Thai driver.

"I knew that we would touch if I did that, so I stayed on the left side and that put me behind Dany, so I had to back off and Carlos went round the both of us. It was a good overtake by him to be honest."

Sainz went on to deliver another solid points haul for McLaren as he finished sixth, thanks to a good strategy call by McLaren and more swift pit stops.

"I just put together the right pace when it counted before and after the pitstops," he said.

"The team did a great job calling me in the moment when we needed to be called in. P6 sounds easy but it was actually hard-fought because of that move around the outside of Turn 3 and then pushing at the right time.

"I think I did the fastest lap [up to that point] coming out of the pits so we just showed really good pace when it mattered."

Frustrated Magnussen was hoping "engine would blow up"

Bottas: Verstappen "kept drifting to the right" in pitlane incident