Williams Formula 1 driver George Russell insists that he has "no hard feelings" about Kimi Raikkonen despite being punted out of the Eifel GP by the Finn. 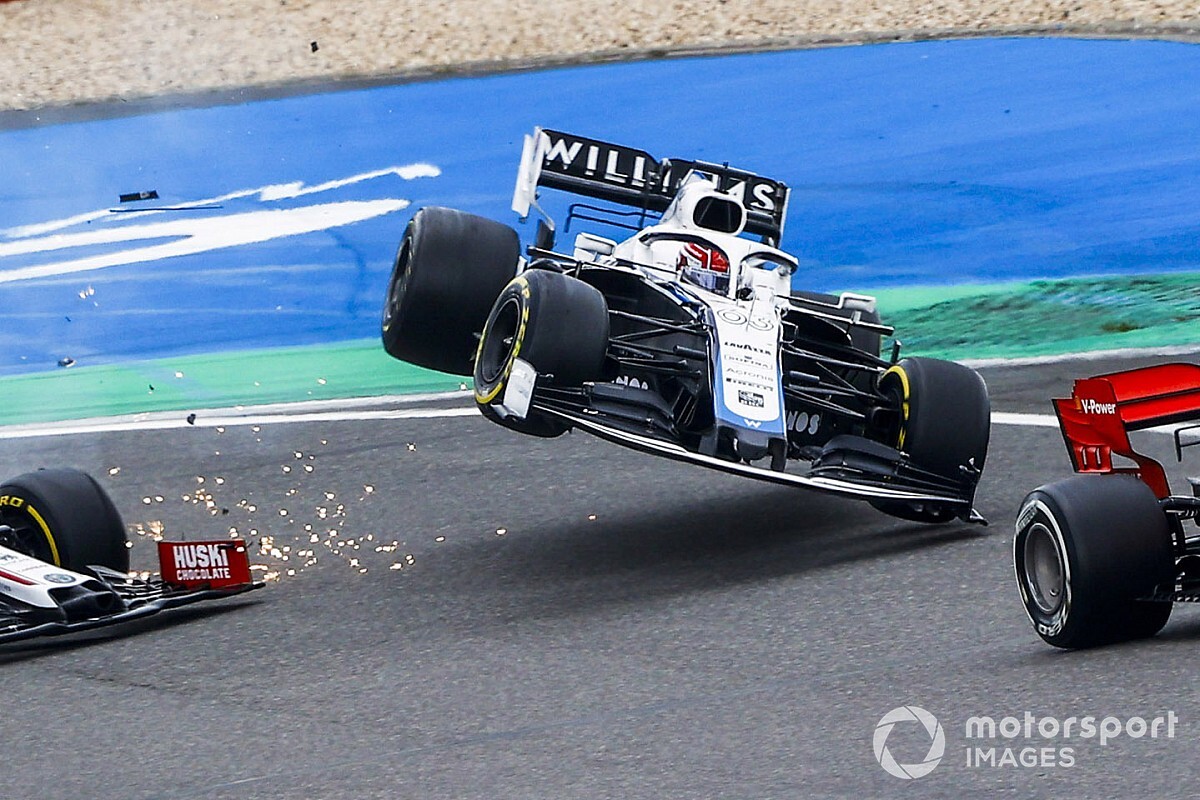 Russell was battling with the Alfa Romeo driver and Ferrari's Sebastian Vettel when he was pitched into the air at Turn One after Raikkonen locked up and slid into him.

He tried to resume but suspension damage forced him to park the car and retire from the race.

Russell was convinced that he could have scored points on a day that saw a high rate of attrition.

"It was obviously frustrating," he admitted. "I actually overtook Sebastian in the chicane before, but he then got the run on me on the exit - which I don't think was shown on the TV - which allowed him to have the DRS.

"And obviously Kimi was behind, I was on the outside. I left plenty of space, but I think Kimi just locked up behind Sebastian, and then lost the rear.

"Sometimes it's racing. We are all pushing hard and it's not easy sometimes, but it's frustrating because the car was feeling good and the way the race went, I think we could have scored points. So it's all going against us at the moment, unfortunately."

Russell did not want to blame Raikkonen: "I think in an F1 car, especially when you're following it's so easy to have a small lock up, and that obviously was the reason as to why he locked up, went wide, oversteered and went into me.

"So no hard feelings. It's racing. But it's obviously frustrating from my side."

Williams has yet to score a point this year, while the two teams that Russell has often raced with or outpaced – Alfa and Haas – both added to their tally at the Nurburgring.

Asked by Motorsport.com about the missed opportunity Russell said that the other teams have had better luck.

"In all honesty I'm realistic, and obviously as nice as it would be to score a point or two or three, ultimately the car just isn't quick enough, and we need to continue to work really hard to bring more performance to the car. Because we don't want to be lucking into these events, we want to be there on merit.

"And ultimately that's where we are at the moment and for the likes of Haas and Alfa, things have just gone their way really, in these races. They are no quicker than us and I don't personally believe they've done anything better than us.

"Things have just gone their way when it's been these very specific opportunities. And it hasn't for us. There's been a number of times when we've had really good races and finished quite high up the order relatively, but there haven't been five midfield cars break down, which is the difference between scoring points or not.

"So it's a shame. Like I say, I think as a race team, we did our things really well. We are getting the most out of our package. We just need to get some more downforce on the car to get us in those positions more often."

Alonso says Renault car "outperforming me at the moment"