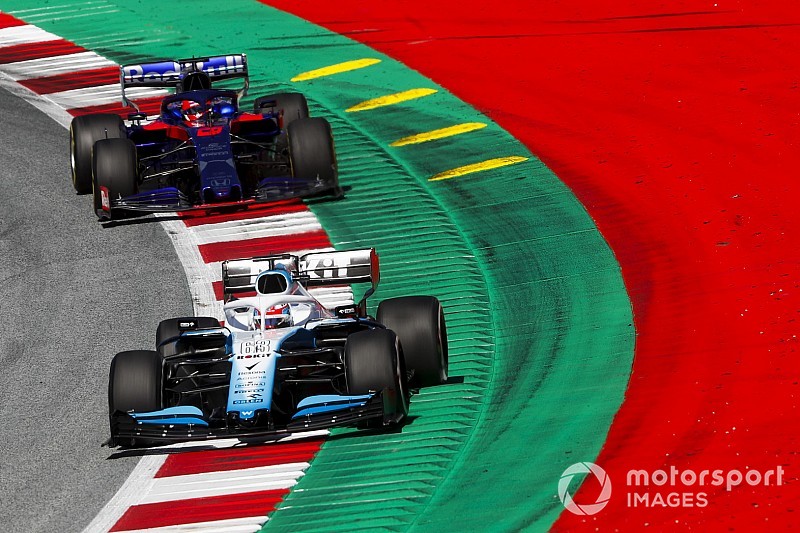 Williams Formula 1 team driver George Russell has landed a three-place grid penalty in Austria for an impeding incident that Daniil Kvyat believes could have had more serious consequences.

The Russian came into the last two corners in Q1 to find Russell going slowly at the back of a queue of cars that also included Kvyat's Toro Rosso teammate Alex Albon.

Kvyat was able to jink the steering wheel to the left and get past safely, but his lap was ruined, and he didn't progress to Q2.

In their decision, the stewards noted that "car 63 [Russell] was not given the requisite warning by the team in a timely fashion about car 26 [Kvyat] approaching on a fast lap.

"Furthermore, the situation was compounded by car 23 [Albon] overtaking car 63 during a slow lap, just before the incident in question."

Kvyat, who told the team at the time that he "almost killed someone," was concerned by the safety implications of the incident.

"What can I say?," said Kvyat. "These things happen, I got blocked today, my qualifying was ruined. I was surprised to see the car right there on the line. I think we also have to be grateful that nothing worse than that happened.

"I think if I would have committed to the corner already, it would have been hard to avoid. But luckily I saw something white entering the corner and then I had to do this [turn left]. It wasn't pleasant from inside the car, that's for sure."

Russell, who also received a penalty point, said he didn't realise that Kvyat was approaching on a hot lap.

"I didn't know there were any cars coming up behind me," he told Sky. "I was warming tyres up and there was a bunch of cars ahead, and the next thing I know Dany is sort of driving around the outside of the track. A bit frustrating really, just one of those things.

"Usually quick cars on track are going about 40 seconds a lap quicker than you. You get the messages from the team.

"I think the team off guard maybe, because everyone ahead was massively backing up, we would have expected to be across the line by that point already. I was focussing on the road ahead and didn't realise anyone was behind me."

Kvyat said Russell had apologised when they met in race control,

"He said, 'Sorry, but look, the team didn't say to me anything,' when we were at stewards and its true. But I think in qualy you always should double check the mirrors yourself. But the speed difference was huge as well, so its hard for me to judge.

"I think the thing is we have to be advised by the team, and we have to look at our mirrors as well. Especially in qualifying, when the penalty comes. Otherwise, I don't have anything more to add to this episode."