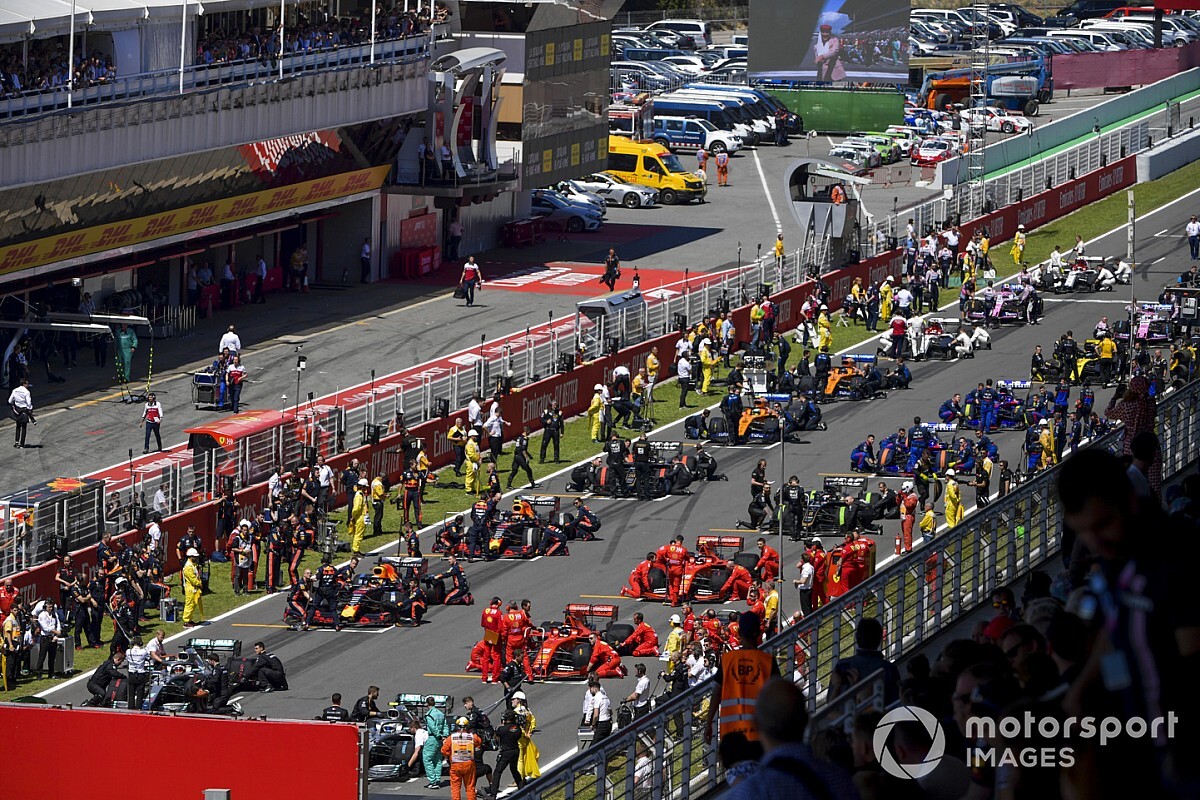 The FIA has released details of the latest changes to the Formula 1 Sporting Regulations as the sport prepares for the return of racing in Austria next month under COVID-19 restrictions.

The updates were formally passed by the World Motor Sport Council on Friday, and officially published by the FIA on Saturday morning.

The FIA has given no specific details of how podium ceremonies will work for closed races, but has kept its options open by stating that “the procedure for the podium ceremony will be detailed in event notes issued by the race director.”

For open events that feature spectators the podium ceremony will run to the established procedures.

One of the main changes is that the grid procedures have been tweaked to allow for social distancing, with a minimal amount of people involved, and for less time.

Teams are only allowed to have 40 personnel on the grid, a number that equates to exactly half the total head count that they are now allowed to take to races.

Without the usual full pre-race ceremonies the pit exit now closes 20 minutes before the start, rather than the usual 30.

Cars will now have to have their tyres fitted five minutes before the start, rather than three, and at that signal “team personnel and equipment trolleys must commence leaving the grid.”

A new rule states that “when the three minute signal is shown, no more than sixteen team personnel for each competitor are permitted on the grid.” The remaining crew members will have to leave before the 15 second signal, as usual.

Teams are already aware that the COVID-19 protocols will make some garage tasks slower, so they have been given a small break with revised curfew rules.

They can now work one hour later on Thursday and Friday evenings, and the curfew now lasts for eight hours, instead of nine.

Pirelli’s request to have more flexibility in terms of the timing of tyre allocations in the context of a fluid calendar has now been formally agreed.

Previously the tyre supplier had to nominate its compound choices 15 weeks before flyaway races, and nine weeks before European events.

Those requirements have been deleted, and the rules now say that the allocations should be made known “unless otherwise determined by the FIA and with the agreement of the supplier, no less than two weeks prior to each event."

As expected, all drivers will be given the same allocation, so teams will no longer choose how many sets of each compound their drivers will have for each weekend. That fixed allocation is two sets of hard, three of mediums, and eight softs.

The provision for compulsory running of extra experimental tyres has been tweaked slightly, and will now take place in the first 30 minutes of P2, instead of the last 30 minutes.

The FIA has also allowed for any travel issues stewards may face in getting to a race, allowing them to work remotely: “In exceptional circumstances, should any stewards not be present at the start of the Event, they must be available and contactable at all times to fulfil their duties.”

In a change to the aero testing restrictions teams have been given a chance to do some work on their 2022 packages this year, but only in relation to proving their brake systems. All other 2022 aero work has to wait until January 1 2021.

For wind tunnels the rules allow “dyno testing aimed to develop brake system components with minimal air ducting and provided such tests do not concurrently test (or in any way provide incidental data or knowledge on) the performance or endurance of parts or systems classified as bodywork.”

Teams are allowed to use CFD for the “sole purpose of the development of brake system components and associated test rigs but excluding any development of air ducts and parts or systems classified as bodywork.”