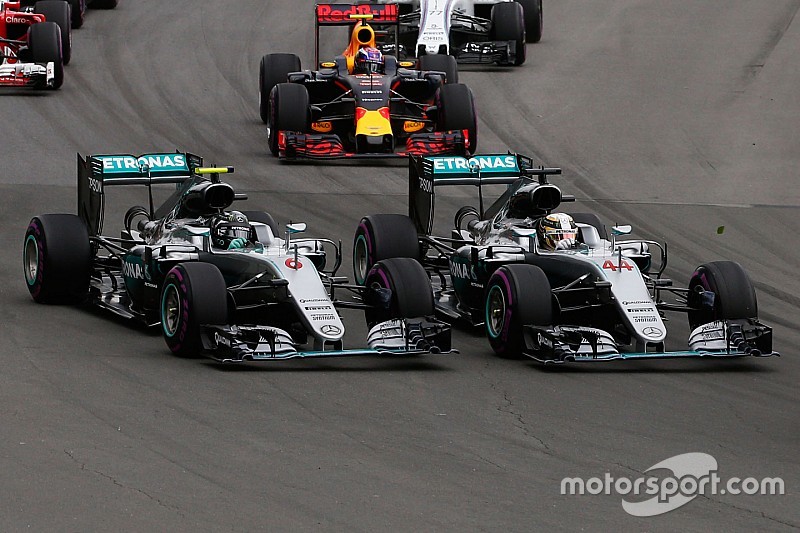 Nico Rosberg insists his bid to get past Lewis Hamilton at Turn 1 of the Canadian Grand Prix was a risk worth taking, even if it ended up costing him a podium finish.

The German driver attempted to go around the outside of Hamilton at the first corner in Montreal, but was ultimately forced wide off the track when his teammate suffered understeer and they banged wheels.

Reflecting on what happened, Rosberg insisted that his effort was not totally in vain, as a similar move at the Spanish Grand Prix had paid off handsomely.

"Lewis had a disastrous start, I had a mediocre one - and you know, what do I do?" explained Rosberg in Baku on Thursday.

"I'm on the outside: if I accept to just let him go through, then I know I'm behind him and that's it, you know, I'm stuck behind him for the race.

"I know it's going to be risky, coming round the outside, cause there has been occasions in the past where he does know how to make it difficult – and fair play.

"In Barcelona, it worked out really well and I tried exactly that thing and it worked out awesomely - it was in the back of my mind."

Rosberg said his decision to try the move was also fuelled by the fact he knows Hamilton has struggled with starts, so is vulnerable early on.

"He was having difficulties in starts, first corners lately - it's not been his strength at the moment," he said. "So I said 'give it a go, go for it, give it a shot' and it didn't work out.

"Of course I couldn't calculate also that I was going to drop all the way down to ninth. I said, 'okay, if it goes wrong, I lose one, maybe two positions'.

"But I didn't figure that I might lose all those. If I knew that, of course I wouldn't do it. But I didn't know that. I gave it a go and that's it. It went wrong because of "understeer".

Hamilton himself has admitted that his starts recently have not been good, and that work was being done to try to improve things.

"We look into it every single day, it's a constant goalpost that's moving," he said. "The last one wasn't great, it was the second to last worst – the 21st worst – but in China I had the best of the whole pack.

"There's been one fantastic one, two good ones, and a few not so good. So it's really moving around at the moment. We're trying to narrow that performance window. Trying to make it more consistent, for sure."

Reflecting on the Canada incident, Hamilton said: "I saw Nico earlier, he thought it was a racing incident, as I did. It's in the past, and we're looking forwards. It's racing.

"If I was him I would have tried to come down the outside also. If he was me he would most likely have been in the same position as me."

When Rosberg was asked if he would try a similar move in the future if put in the same position, he said: "You can't compare one situation to the next - I just have to... of course it was one more learning experience for me in the battle with him.

"I just have to see how it goes and decide then, in the moment, what approach to take, you know. I can only go back to Barcelona, for example, where that would have won me the race, that move. In Barcelona, it went the other way. It's not clear cut, it's a fine line and it's [a call] in the moment."