Ricciardo says running out of tyres made FP2 "strange"

Daniel Ricciardo believes running out of useable tyres made second practice for Formula 1's Azerbaijan Grand Prix even stranger for him than the abandoned first session.

The Renault driver ended FP2 with more than half an hour to go because he had flat-spotted two sets of tyres in the first hour.

FP1 was red-flagged after just over 10 minutes because Williams driver George Russell struck a loose drain cover, and the session was swiftly abandoned because of necessary safety checks.

The unusual setbacks meant Ricciardo completed 16 laps across the two sessions, and he admitted: "It [the FP1 abandonment] was strange for sure and then FP2 was probably even more strange.

"I missed the last half hour or more. Normally around here it's because you've crashed. My reason was flat-spotting both sets. Unfortunately we didn't have any tyres to do a long run. I don't think I've ever been in that position before.

"Obviously it was not cool, it's frustrating, but at least it highlighted some areas we'll work on tonight. I wouldn't say I'm concerned, I just know that hour [of final practice on Saturday] we've really got to get into it and be super-efficient."

A day of curious problems also included Ricciardo's front brakes catching fire while he performed a U-turn after running down an escape road during FP2.

He was not aware that had happened, admitting: "Were they? I know my engineer said my brakes were hot! I guess now I know what he meant. I thought I went back enough [to complete the U-turn]. I was a bit slow. I didn't calculate the turning circle too well!"

Both Renaults were uncompetitive in FP2, which Ricciardo ended in 15th, 2.6s off the pace, while teammate Nico Hulkenberg was 17th.

Most drivers reported difficulties with building enough tyre temperature to have strong performance in the tight middle sector.

However, Ricciardo believes the team's aerodynamic strategy was too aggressive – favouring the high-speed first and third sectors – and said its low-drag set-up needs to be changed to provide more downforce.

"We had a look at the competitors and our wing certainly looks smaller," he said. "I guess I'm convinced now we'll put a bit more wing on and go from there.

"I know Nico struggled with the long run. With more wing we'll get more temperature and load through the car, so hopefully that helps us."

Hulkenberg suspects that Pirelli's thinner-gauge tyres, present at every race this year to counter blistering, have played a part in teams having less grip in the corners than expected.

"I think that [increasing aero]'s one way of doing it and there's also the rim heating and the cooling options that we run," said Hulkenberg. "Maybe we overshot today. The tarmac here is very smooth, it's quite special tarmac here compared to all the other tracks. This year we have thinner gauge tyres which probably makes it tougher to create temperature." 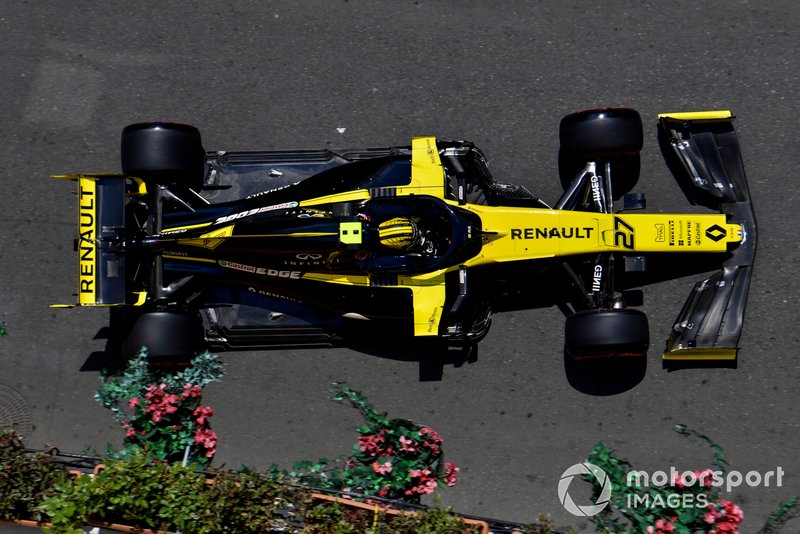 Why Ferrari had an unusual advantage in Baku