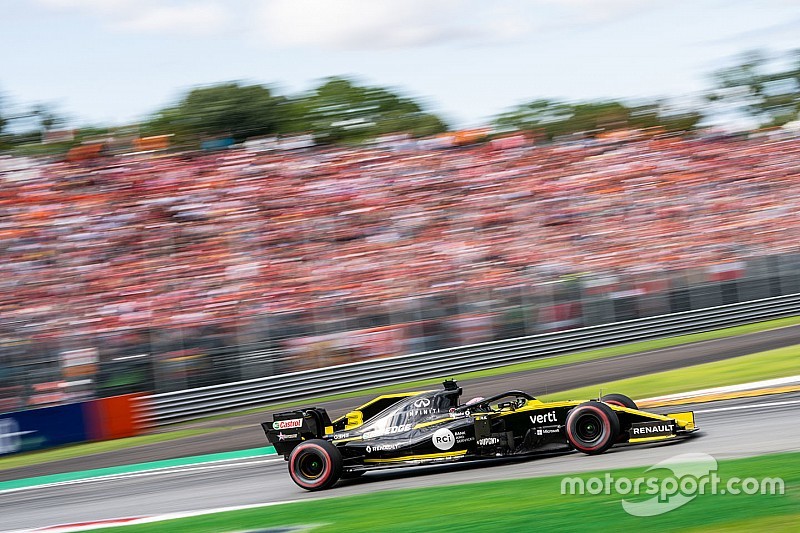 Daniel Ricciardo has singled out the "special" effort that Renault's engine department has made this year, on the back of its best result of the season at the Italian Grand Prix.

The Australian and teammate Nico Hulkenberg delivered a strong performance at Monza to finish fourth and fifth, and give their team hope that it can still overhaul McLaren in the constructors' championship.

For Ricciardo, the performance was proof of how much progress Renault had made with its power in 2019, which is why he is so keen to point out how good a job its Viry-Chatillon engine base has done.

"We finally got 'maximum' points, if you know what I mean, and that's really pleasing," he said. "I want to kind of give an extra special shout-out to Viry, to the engine boys. I think to get this sort of result with the Renault team and power unit is quite a statement.

"Every year we [went to Monza] and it feels like there's a lack of optimism. At least, over the last few years it was never a strength of ours. And for them to turn it around this year to make the gains and put on this result is special.

"Hopefully we can learn something from these low-downforce circuits and take it into a high-downforce one, like Singapore."

While the Monza weekend was encouraging, Renault's strong pace has highlighted that the more difficult times it has at other tracks is most likely related to a lack of downforce.

That is why Ricciardo is hoping the Italian showing has delivered some valuable lessons that can help it on the tracks coming up.

"Enstone have definitely built in the last few weekends a car on low downforce which felt good immediately out of the box, even though there's less grip with the smaller wing," he said. "It kind of felt easier to drive and more balanced.

"For sure, the package we've got on those circuits is great so coming into Singapore I think there's a lot of things we can learn with a high-downforce and take something from there.

"We definitely seemed stronger on these higher-speed flowing parts. But it doesn't mean we can't get it right on low speed. So we'll do some homework and hopefully it's an encouraging result for the boys at Enstone and particularly Viry."

How Ocon ended up back at the team that rejected him