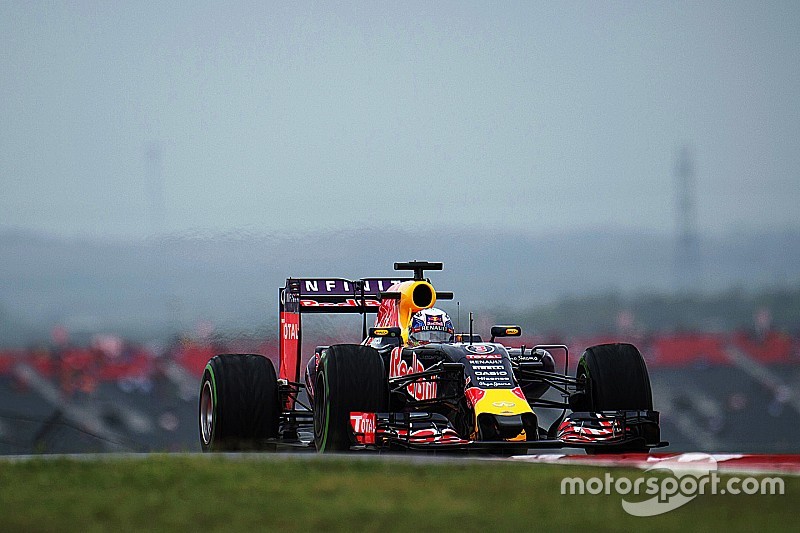 Renault is to delay introduction of its updated engine until the Brazilian Grand Prix at the earliest now, after deciding with Red Bull not to run it in Austin this weekend.

The new specification power unit features a revised combustion chamber and the French car manufacturer believes it will deliver an improvement of 0.2 seconds per lap.

But with the benefit of using it being small, the downside of taking a grid penalty to fit it at the United States Grand Prix has been deemed to be too much.

Although some thought was given to using it from final practice, the weather conditions, its pace potential and the fact rivals Ferrari having already taken grid penalties mean it prefers to hold fire for now.

Furthermore, with next weekend's race in Mexico requiring a unique cooling package, Renault believes it makes no sense to introduce it there.

That means the earliest it could appear will be next month's race at Interlagos.

Remi Taffin, Renault's director of operations, said: "We are not going to use it for some good reasons: which are overall, we decided it was not the best way to achieve the weekend and to get the most out of it.

"First because if you look at this weekend, taking the ten places penalty versus what we would have gained, seems to not be worth it.

"And if you look also at the conditions when it is wet, the Red Bull Renault is much better in these conditions - so it is even worse if you take a 10-place penalty.

"Then, if you look at the opposition, some have decided to take some penalties so all in all we are happy not to take that engine for that weekend."

Renault has two of the new specification power units available, and has confirmed that Toro Rosso has decided against using it this season.

And although a two tenths of a second benefit, considering it has used 11 tokens, may not seem much, Taffin said that progress has been limited because so much focus earlier this year was on sorting reliability

"If you look backwards, the starting point of the season was where we actually had a few failures that we had to fix," he said.

"I already stated by Barcelona that we were more or less back on reliability, and that was in May. So we only had two or three months to decide on what could be the last specification of the year. And then you have to produce parts.

"It is more the fact that what we get out of the engine at the minute is the result of what happened earlier. If we took at what we have on the dyno now and put it on the car, because you can do it like this – it could be half a second. But it is not ready."

The decision to delay introduction until Brazil will also give Renault more time to further fine tune the update as well, bringing further improvements before its introduction.

When asked how important it is that Red Bull runs it at least once, Taffin said: "It is always difficult because we always say we have plenty of simulation dynos.

"But you like to have the engines in the car, you get driver feeling and measure what they have in the car."

US GP: FP2 delayed “indefinitely” due to lightning threat

US GP: Second practice cancelled due to poor weather