Formula 1 teams may be masters of trying to disguise secrets of their new cars when they are first revealed – but Red Bull has taken things to a new level.

The Milton Keynes-based team appears to have gone out of its way to make sure that no detailed images of its new RB16B can be accessed by rival teams prior to the first day of pre-season testing in Bahrain.

After conducting a filming day at Silverstone with both its RB15 car from 2019 and the new RB16B on Wednesday, it was noticeable that of the 76 images the team released after running, none of them were of the new car.

Shots were captured of Max Verstappen, Sergio Perez and Alex Albon all in action and in the garage over the full day of running, but each was captured driving the RB15 only.

All of the full car garage shots, panning shots and front views were of the old car. The RB16B was missing in action.

While it would not be amiss of a second-rate team and photographer to accidentally send out the wrong car images and omit any shots of the new machine, Red Bull is a sharp outfit that knows what it is doing. So you can bet that the choice of images that were released, and those that remain hidden for now, was deliberate.

And the most likely explanation for why Red Bull is not showing off its RB16B just yet is that it wants to keep its new car design tweaks secret for now.

A team as competitively single-minded on winning as Red Bull will always want to stop prying rivals getting a good glimpse of any design it has done until the last minute – so it won't want to give them a head start in being able to get the experts to pore over photographs of the car right now.

The area of its car that Red Bull most likely wants to keep secret is the rear – both in terms of its exact suspension layout after adopting the Mercedes style track rod/lower arm configuration but also the section surrounding the exhausts and gearbox.

The team could also have some tricks up its sleeve in terms of how it has addressed the rule changes surrounding the floor – and how it plans to have recovered any lost downforce.

The two launch images that Red Bull revealed earlier this week appeared deliberately darkened in some areas, and featured an interesting flick on the floor ahead of the rear tyre that the team had tried out last year.

For an area of the car that has been so ripe for development over the winter, it is unlikely that Red Bull hasn't moved on quite considerably already.

So how much of what we saw of the RB16B launch images is real design for 2021, and how much a decoy, only Red Bull knows so far.

Teams have been known in the past to fit fake parts to launch cars to throw rivals off the scent, or ensure that the best components aren't actually present when the first shots are spread around in public. It could also be that Red Bull isn't hiding anything, but will want to waste rival teams' time by trying to find out what it could be up to when testing does get underway.

With just three days of testing this year, there is not much time for rivals to copy any interesting ideas off their rivals once the cars are unleashed in public.

The real answer about what Red Bull is hiding will not be known until Bahrain testing, and even then it may take some effort from rivals to find out what it is up to. 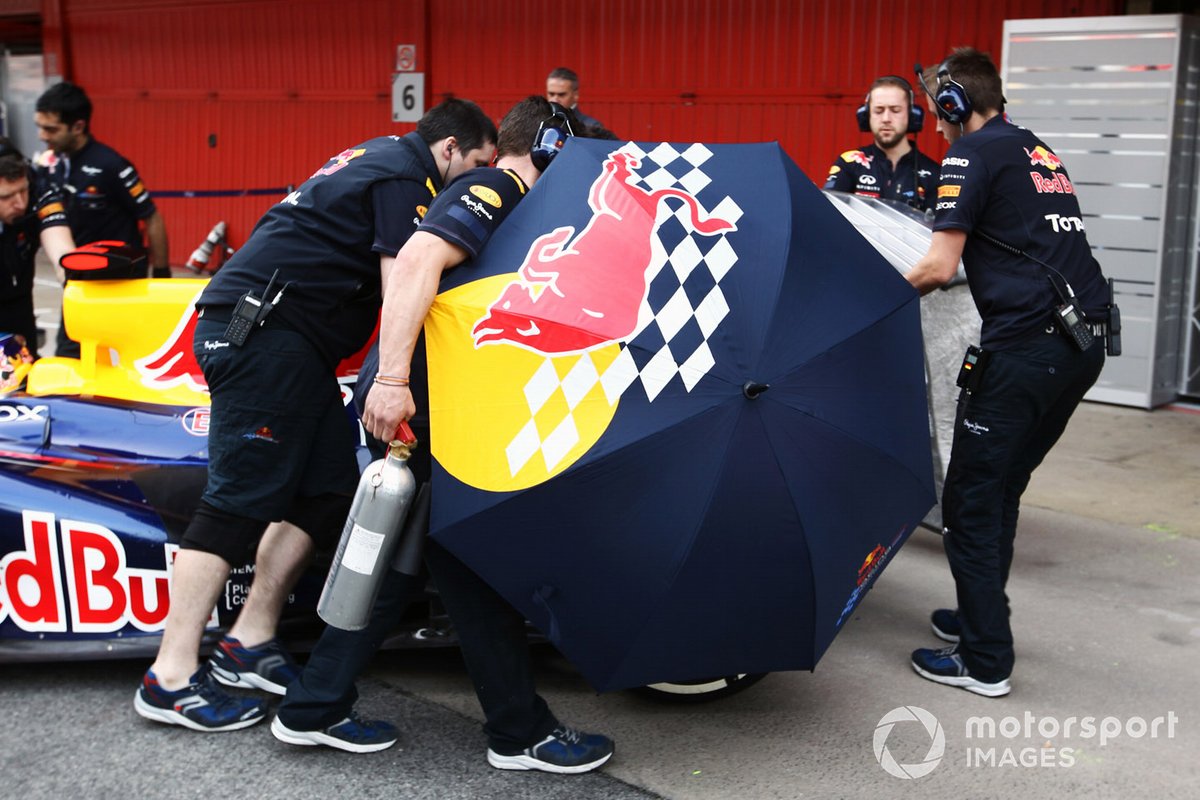 In the past, Red Bull has been known to go the extra mile in hiding its latest designs at testing too – with team members famously using umbrellas back in 2012 to hide car components whenever its machine was rolled back into the garage.