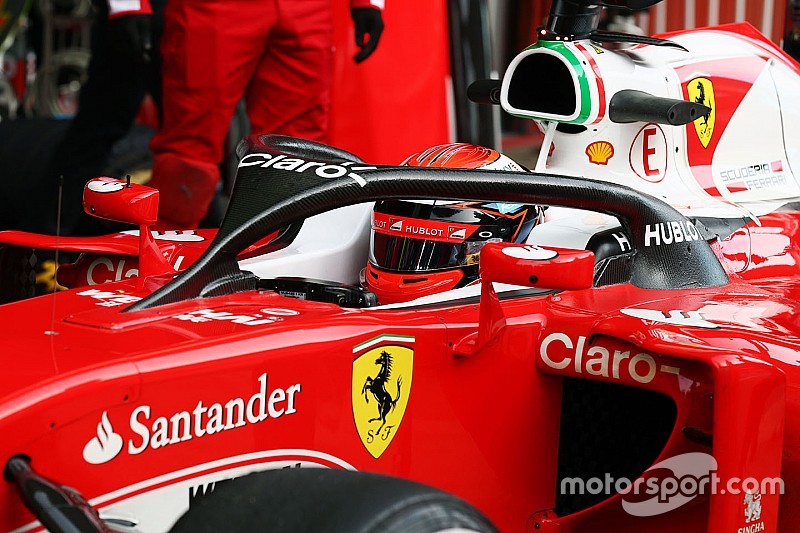 Kimi Raikkonen became the first driver to test the new halo closed cockpit concept during Formula 1 testing at Barcelona in Spain on Thursday.

The structure was fitted to his car for an installation lap in the morning and comes as the FIA works on introducing the design into F1 for 2017.

Painted in black, the frame is aimed at protecting the head and featured a single column down the centre - which has been the solution that teams and the governing body have favoured.

After completing a single lap at the start of the day, the Halo concept was removed from the car so Raikkonen could resume his normal testing programme.

Ferrari has been working on its version of the Halo concept for some time, and Motorsport.com understands that a lot of effort has gone in to reducing its weight.

Having originally been around 10kg, it is believed that the version trialled on Thursday is down to just 6kg.

At the moment the early prototype structure can only be attached in a fixed state to the car, whereas longer term the hope is that the top element can be raised up to allow drivers to get in to and out of the cockpit.

The Halo was fitted to the Ferrari on Wednesday night and Sebastian Vettel tried it out in the car in the garage.

However, it was decided that Kimi Raikkonen would be a far better person to conduct early visibility tests on track because he would offer a far more impartial view on its impact on the drivers.

The FIA has been evaluating many different closed cockpit solutions over the years, but many design ideas have not come up to standard.

A fully closed jet-fighter style canopy not only hindered driver extraction but also had the effect of throwing any debris that collided with it high into the air.

The Halo idea has gathered support over the past 18 months though, and GPDA chairman Alex Wurz said it was a no-brainer that this idea came in as soon as possible.

F1 race director Charlie Whiting told teams earlier this year that the FIA was set on making sure it happened for 2017.

Wurz told Motorsport.com: "Maybe in the far future we will move to jet fighter cockpits with the closed canopy, but that is too heavy at the moment, it's too expensive, it would need a longer time to look at this solution.

"Maybe that will happen because it has a few other interesting aspects. But the experts and drivers agree that the Halo should come in.

"It's on the grounds of safety, and in theory, the FIA could decide it by themselves, but it requires a structural change to the chassis, and it's obviously in the nature of everyone involved to work together."

Giorgio Piola revealed last year in this video just how the Halo concept would be incorporated on an F1 car.

F1 Performance analysis: Snapshot of Mercedes vs Ferrari at Barcelona