Raikkonen, Ferrari, not 'worried' about 2013 form

Ferrari is not having one of its best years and lately Raikkonen has not shown the form he had earlier this year; yet no one appears overly worried about the future.

Oct.27 (GMM) Ahead of their 2014 reunion, Ferrari and Kimi Raikkonen insist they are not worried about one another's worrying run of poor form.

Ferrari is ending the 2013 season as arguably only the fourth-quickest team in pitlane, after Red Bull, Mercedes and Raikkonen's current employer, Lotus.

How is that making the Finn feel ahead of his return to Ferrari for 2014?

"Good," the inimitable Raikkonen said in India, to the laughter of assembled reporters. 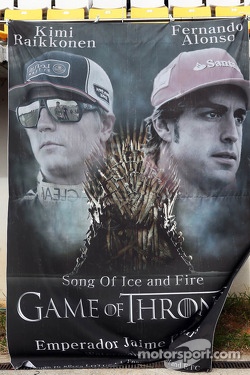 "Otherwise I wouldn't have made the decision if I didn't think it was right for myself," he argued.

But if the cool Finn is not worried, perhaps Ferrari is. At recent Grands Prix, particularly since Raikkonen's Lotus exit was announced, the 33-year-old has been slightly off teammate Romain Grosjean's pace.

"I'm not the slightest bit worried," Ferrari team boss Stefano Domenicali told the Finnish broadcaster MTV3, "but of course I have been following him this season.

"He has already gained our respect based on what he has been doing in his current team," the Italian added.

"He is now coming to us, and I look forward to getting to work with him again," said Domenicali, referring to Raikkonen's first Ferrari tenure between 2007 and 2009.

Many in the paddock still find it hard to believe Raikkonen, a former team champion, will be paired at Ferrari with 'number 1' Fernando Alonso next year.

That is part of the reason the Alonso-to-McLaren rumours are still alive, but another reason has been Alonso's regular criticism of Ferrari's form this year.

Domenicali, however, said Ferrari can swallow most of Alonso's comments. "To us it's an indication that this era must end," he acknowledged, referring to the fact that the team has not won a title since Raikkonen's in 2007.

"I have experienced an era similar to what we see now," Domenicali added, referring to the dominance of Red Bull, "but if you look back, you can also see how quickly things can change."

2014 not ultimatum year for Vergne - Tost