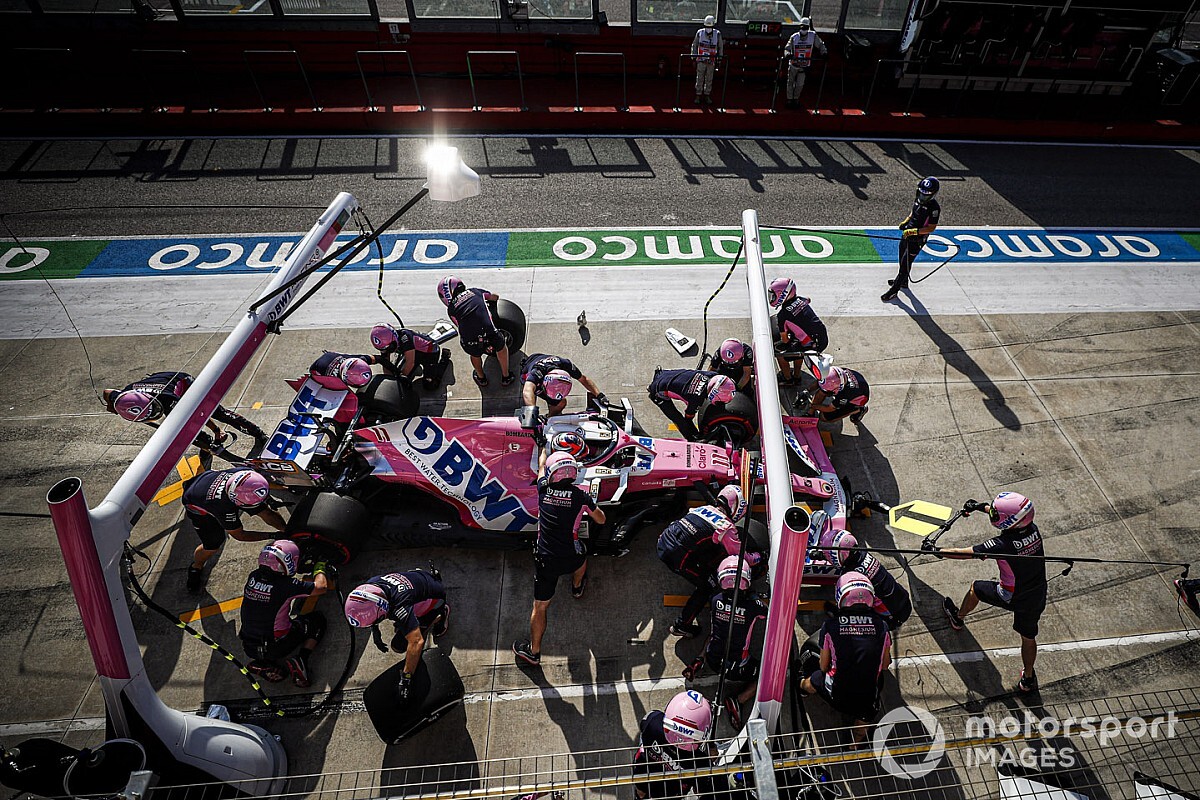 Racing Point Formula 1 team technical director Andrew Green insists that the decision to pit Sergio Perez late in the Emilia Romagna GP was the right one at the time.

The late stop cost Perez a potential third place and left him rueing a “painful” outcome that saw him eventually cross the line in sixth.

From 11th on the grid Perez had used good tyre management and a long opening stint on mediums to get up to fourth, before switching to the hard tyres for the run to the flag.

When Max Verstappen’s retirement triggered a late safety car, the team was concerned that Perez would have trouble getting heat onto his hards at the restart – due to the very characteristics that had served him so well in the first part of the race. He was thus called in for a set of new softs.

However the three drivers immediately behind him, Daniel Ricciardo, Charles Leclerc and Alex Albon, all jumped him in the queue by staying out, leaving him in sixth for the resumption.

When the green flag flew, Perez lost a further place to Daniil Kvyat, who was also on fresh tyres. He then managed to pass Albon, but in the remaining laps he was not able to do anything about Leclerc up ahead, and thus had to settle for sixth.

Green said the way the car protected its tyres triggered the concerns about the restart.

“The race was going our way completely,” said Green. “Up until the safety car Checo manoeuvred himself, with great pace, up to fourth.

“He overtook the pack by going longer on the medium tyres, he drove really well, the car was really strong, we were very happy with where it was going.

“And the worst possible scenario was a safety car. And that was not really how we were geared up, unfortunately. It was always going to be a difficult decision, that one.

“We were on the hard tyres, the car had been set up, quite specifically, for the long runs, and for the race we were incredibly nervous about having to restart the hard tyres behind the safety car. And I think we would have struggled.

“So the safest thing to do and we thought that the most logical thing to do was to swap him for a set of the new softer tyres, so that we didn't have to worry about that. We thought other people might do the same, but a lot depends on how they were set up for the race.

“And I think it probably just showed where our race pace was, because we'd set the car up to look after the tyres and be kind and not overheat them. So we were always going to struggle behind the safety car in that situation.”

Green said the situation was made worse for Perez when George Russell crashed behind the safety car, extending the yellow period for a few more laps, and taking the edge off his new tyres.

“And then we've got the other thing with a second incident behind the safety car, we couldn't have predicted that one.

“So the number of laps remaining to overtake was shortened again, by a considerable margin. So I think that worked against us.

“Hindsight, we would have made a different decision. But I think at the time with the information we had that's the decision we came to.”

Why Italy's minnow F1 team could become its new maestro