After a four-day hiatus Formula One returned to the Bahrain International Circuit today to begin its final pre-season group test before shipping out to Australia and the first grand prix of the 2014 season.

Force India’s Sergio Pérez recorded the fastest lap of the day, though few teams seemed to be searching for outright pace. Headline times were several seconds slower than those recorded at the circuit last week. Instead, the day saw the front runners largely focusing on long-run pace and – as is now expected at the last test of the winter – fitting aerodynamic parts closer to a race-specification than those seen previously. 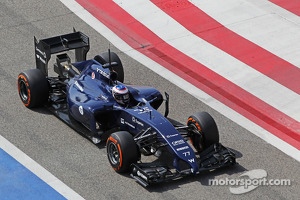 Pérez finished nine-tenths of a second quicker than Valtteri Bottas, though the Finn recorded the highest mileage of the day, with 128 laps for Williams. Kimi Räikkönen for Ferrari was third quickest, Nico Rosberg fourth for Mercedes and Adrian Sutil fifth for Sauber. McLaren’ Kevin Magnussen was sixth fastest. He completed 109 laps, joining Pérez (105) and Bottas in three figures. That was seventy laps more than seventh-fastest Daniel Ricciardo managed for Red Bull – he did, however, had the consolation of being the fastest of the Renault-engined cars. Eighth on the timesheet was Marussia’s Max Chilton who was followed by Daniil Kvyat for Toro Rosso, Pastor Maldonado for Lotus and Caterham’s Kamui Kobayashi.

Bottas was the first man out on track, leaving the garage almost immediately the pitlane exit light turned green, though all 11 teams were lapping within the first half-hour. The first time of the day was set by Ricciardo, with a 1:40.262. The Australian dropped that to 1:38.642 moments later, over a second faster than the RB10 managed at the previous test.

If that were a reassuring start for one Renault team, the opposite was true at another as Caterham caused the first red flag of the day, with Kobayashi pulling his smoking car over 40 minutes into the session.

Mercedes’ Nico Rosberg gave the timesheet a familiar shape when he went fastest an hour and a half after the start with a lap of 1:37.722. That stood as the benchmark for an hour before Pérez took a second out of it with a lap of 1:36.051. He then improved to 1:35.290 as the lunch break approached. 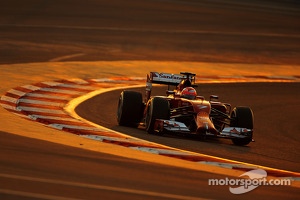 "We really needed a good day to start this week and today we had it,” said Pérez. “We managed to do a lot of laps, try several different compounds and mappings, and it's been a fantastic day in terms of learning about the car. Tomorrow is my last day in the car before the season starts so hopefully we can have another solid day to be in good shape for Melbourne.”

In a change to the timetable for the previous test, a half-hour break was scheduled for 1300, compensated with an extra half hour on track at the end of the day. The change was for the benefit of the track marshals rather than the teams – though some had a busy lunch break as Pastor Maldonado stopped out on track a few minutes before the interval. Lotus had been trialling a new exhaust system and later revealed this to be the source of the breakdown. They did not run again during the day.

After lunch Kvyat caused another red flag, stopping the Toro Rosso at Turn Two but there was happier news from the other Italian team. An unspecified glitch had restricted Raikkonen to just 12 laps in the morning but Ferrari were able to resolve the issue and allow the Finn a full afternoon of running – though it was he who brought the session to a slightly premature conclusion, stopping out on track a few minutes before the scheduled close. 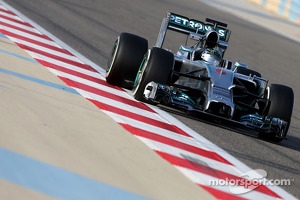 Things were going the other way at Red Bull. Ricciardo completed 32 laps in the morning but failed to build on that, spending much of the afternoon in the garage as the team suffered a problem with its exhaust. Ricciardo added a further seven laps at the end of the day – but with Red Bull wanting a significant increase in track time this week, it was not the ideal start to proceedings.

“We sent Daniel out for a long-ish run, but we had to abort about five laps in, as we noticed some issues on the sensors,” explained race engineering co-ordinator Andy Damerum. “We brought him in, had a look at the car and discovered that we had a problem with the exhaust. So we had a long afternoon in the garage, but we did manage to get Daniel back out at the end of the session, which was good. We have some work to do overnight but hopefully tomorrow we’ll be able to run in a similar style to this morning.”

Ecclestone hits back at 'foolish' rebuke