Esteban Ocon says his podium hopes in Formula 1’s Saudi Arabian Grand Prix were ultimately dashed by a chunk of floor coming off his car two laps from home.

The Alpine driver had been running third behind Lewis Hamilton and Max Verstappen for much of the Jeddah race, before facing a late challenge from Valtteri Bottas.

Although he managed to stave off his Mercedes rival for a while, Ocon ultimately lost a drag race out of the final corner and crossed the finish line just more than one tenth of a second behind.

Speaking about what happened at the end, Ocon said that a drop in performance two laps from home, triggered by part of his floor coming away, what the factor that cost him the most in the end.

“We suddenly lost quite a lot of performance in the last two laps,” he explained.

“There had been quite a lot of contact in that race. In the first start there was some contact with [Yuki] Tsunoda, and then there was the contact with Lewis [Hamilton, at the second restart].

“So we lost a big chunk of the floor two laps from the end, and I was quite a lot slower. I lost quite a lot of my rear grip and I thought it was just my tyre degradation going.

“So I had to use a lot of our battery to keep Valtteri behind. And then, arriving to the flag, we basically derated so we had no hybrid left. That’s why we couldn’t keep him more behind. It's a shame that we lost that performance in the last two laps but we can’t have everything obviously.” 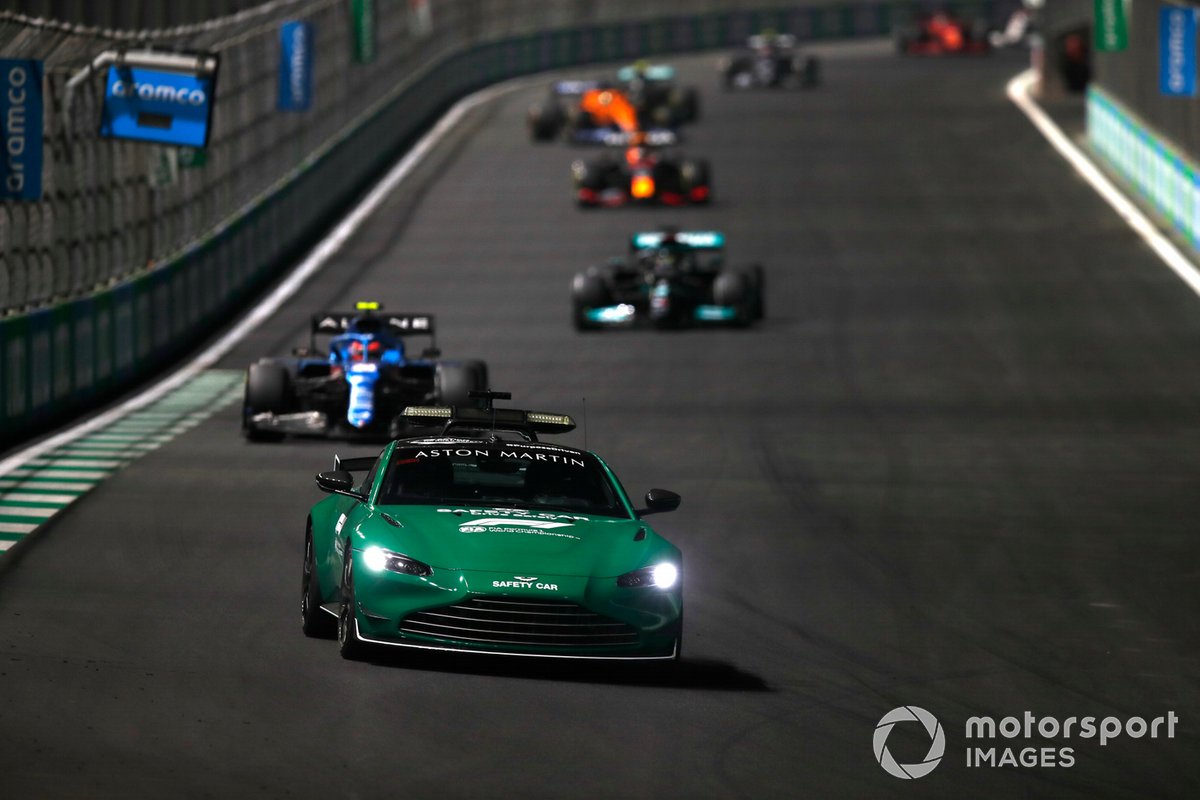 Ocon was handed pole for the second restart, buit said he didn't want to try and keep Hamilton or Verstappen behind

Ocon’s shot at a podium was made by Alpine electing to keep him out at the first safety car period, which moved him up the order to run fourth when the red flag was called.

He then benefited hugely from the Hamilton/Verstappen moment at Turn 1 of the restart, to eventually be handed the pole spot for the second restart.

Well aware of the championship situation, Ocon did not want to get too involved in fighting the title contenders – but still got caught up in their battle as he tagged Hamilton's front wing.

“I thought they were going to be aggressive with each other, but they hit me as well in the same moment,” he said. “I mean I was expecting it to be a tough fight for sure in the first couple of corners, and I never had the intention of keeping them behind anyway.

“I knew they were going to be a lot faster so I let both of them go. I was not really trying to ruin my time in the race, I was trying to do the fastest time I could, and that was the best way I could do it.

“After that, we needed to keep that third place.”