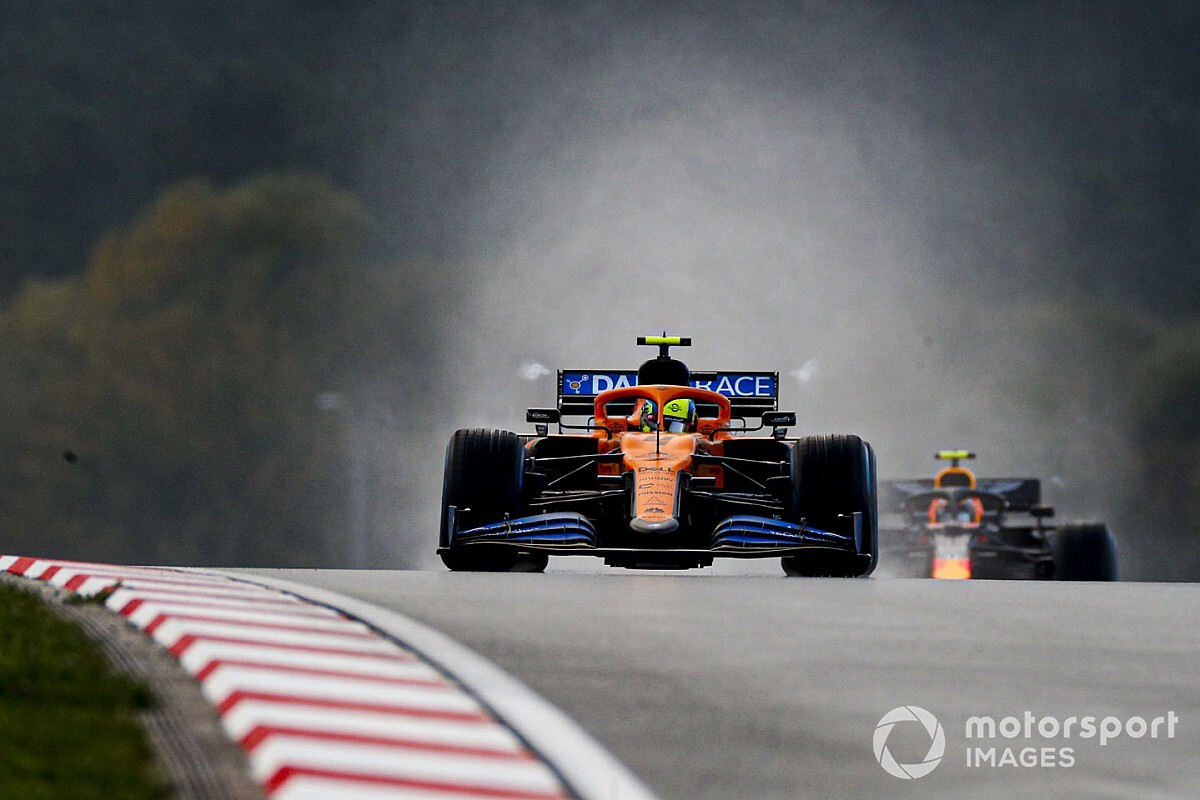 Lando Norris thinks there is a high chance of Turn 1 "chaos" in the Turkish Grand Prix, thanks to the low-grip track surface at the Istanbul Formula 1 track.

The recent resurfacing of the circuit has left F1 drivers battling against tricky conditions all weekend, with cars sliding around a lot in both the dry and the wet.

And with the surface having had no chance to rubber in thanks to the rain that affected Saturday’s running, things are expected to be just as difficult in the race.

Norris fears, however, that the lack of grip is so bad that it will be hard for drivers to avoid contact on the opening lap tomorrow after the short blast from the grid.

Asked what he expected from the race, Norris said: “I think just quite a risky difficult Turn 1, and probably quite a high possibility of a crash or something.

“We struggle just as much in the dry almost as we do in the wet, to get the tyres in at a good temperature, especially when you're not on soft tyres.

“Also, having the warm up lap, which is going to be the opposite of a warm up lap, you're going to be cooling the tyres down, and it's kind of defeats the object of it. It is going to cause more chaos than I think everyone's almost expecting going into Turn 1.”

The only saving grace for the start, says Norris, is that there is only a short blast down to the first corner so there will not be much chance for anyone to try and risk a dive-bomb move to gain positions.

“I don't think you'll necessarily see anyone diving, because there's not going to be that high speeds,” he added.

“I think it's very easy to make mistakes and probably lock a front tyre or let the rear snap round because the tyres are cold. So it should be exciting. You just have to try and stay out of the carnage.”

Norris’ teammate Carlos Sainz agreed that things were going to be exceptionally difficult on the first lap, and he urged everyone to be sensible.

“So I hope that everyone just gives each other a bit more space because the mistakes could happen at any time and at any point, without really being intentional.

“It is just that these cars are extremely difficult to control with cold tyres and there could be things happening really without anybody intending it. So let's see what happens.”