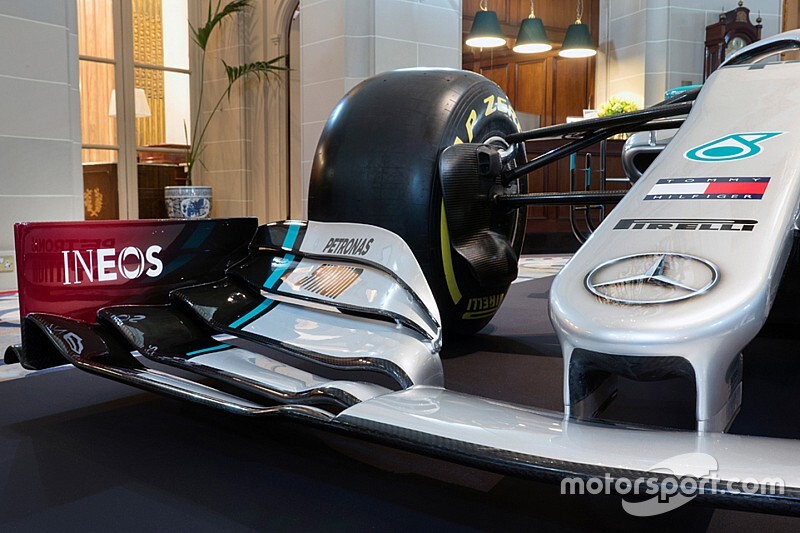 Mercedes boss Toto Wolff has labelled recent suggestions it is preparing to leave Formula 1 as "nonsense" - as he says the focus of parent company Daimler is on remaining in the sport for the long term.

The German car manufacturer has been on the receiving end of speculation about it remaining in F1 beyond the end of this year because, like other teams, it has not yet signed up to a new Concorde Agreement that is being discussed between teams, FOM and the FIA.

But speaking at a press conference on Monday, where Mercedes announced a new principal sponsorship deal with multinational chemicals company INEOS that runs for five years, Wolff said that he was comfortable with where things stood as talks continues.

"Like always we are in this for the long term," he said. "F1 provides a great marketing platform for our brand. This is what we do.

"We build race cars and we build road cars. F1 is the halo platform for hybrid engineering. That is something that is not communicated enough, because it was talked down at the beginning of the V6 hybrid era. And it's something we should really put more emphasis on.

"In that respect with, with all the things that are out in the media, we like the platform, but at the same time, we're in a negotiation with the rights holders, and things need to be sorted out. But the partnership is clearly something that indicates our wish to continue our successful journey in F1."

Recent stories suggested that Mercedes was preparing to withdraw from F1 as part of a major cost-cutting exercise for parent company Daimler, with a decision due to be made at a forthcoming board meeting.

But Wolff hit out at that report, as he suggested that the in-depth analysis Mercedes had been conducting about its future in F1 was normal procedure for any major company.

"F1 has always been a great provider of headlines over the winter break. And by the sheer lack of racing results and the controversy on track, dropping a bombshell of a headline, always sells," he said.

"And in that respect, I'm always surprised that there's just some lunatic out there that writes something on an internet page and it's being picked up, which was a complete nonsense story, which was put straight by the CEO of Daimler the following day. That is one part of the story.

"The other part is that with everything we do, we have to question is it the right activity that we deploy? It's whether it's in the petrochemical business, whether it's as an OEM in the car industry, or whether it's F1.

"We, as Daimler today, we see the advantages and the benefits that Formula 1 as a marketing platform provides to us and we see the data. And that is the underlying condition why we're doing it."

Wolff was clear that with Mercedes attracting the INEOS sponsorship on top of its title deal with Petronas, plus the impact of the cost cap coming for 2021, that the door was there to make F1 profitable for Daimler.

"This is exactly what we have as our target," he said. "We want to make it a no brainer from the sheer numbers. The marketing is huge and the return on investment should be the icing on the cake.

"We see that in the American sports leagues that most of them, the NFL or the NBA, are profitable franchises. And this is my personal aim and my personal contribution with our partners to turn this into such a corporate company, so that from a service standpoint it becomes a no brainer to participate."

Wolff said it was impossible to state for certain when negotiations to finalise the Concorde Agreement would be complete, but he hoped it would not drag on until the start of 2021.

"It's an ongoing process and it's a complicated set of contracts, trilateral contracts between the FIA, the commercial rights holder and all the teams," he said.

"That needs time and the devil is in the detail. So I wouldn't want to commit here to give you a specific date because there are quite some topics that remain to be agreed on.

"It's work in process. Clearly there is the will and the wish for all of the stakeholders to come to a close before we embark on the 2021 season, because [otherwise] that would be an uncomfortable situation."