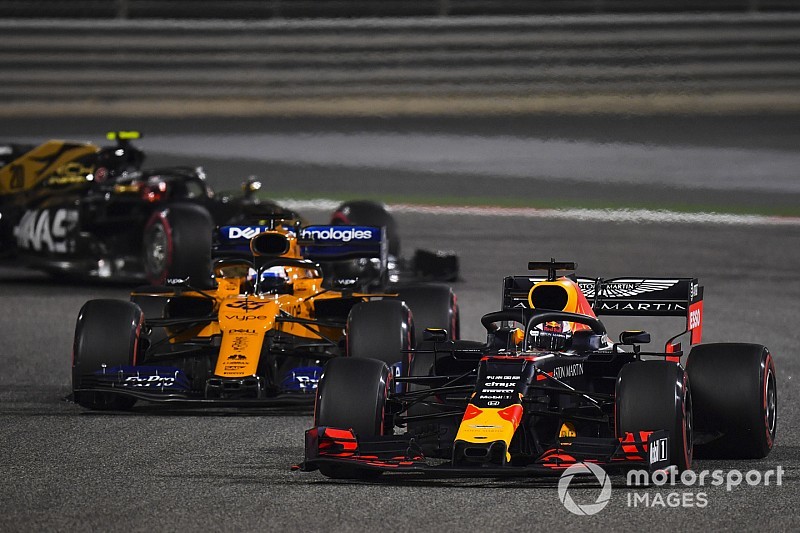 McLaren thinks it is too much to expect it to be able to regularly battle Red Bull from now on, despite its promising performance in the Bahrain Grand Prix.

The Woking-based outfit has made good progress with its car this year, and Carlos Sainz tried to pull a move on eventual fourth-place finisher Max Verstappen at Sakhir last weekend before they clashed.

Although the collision put Sainz out of contention, the fact he was able to challenge a Red Bull has pointed to good potential in the team's car.

But McLaren CEO Zak Brown has urged caution about the team's situation, and he still believes that there is a big gap between the top three teams and the rest of the field.

Asked by Motorsport.com if he was hopeful of more Red Bull battles this year, he said: "I think that will probably be optimistic.

"I was pleasantly surprised we were as close to them at the weekend. But I think we still feel there is a big gap to the top three, and I don't think this weekend changes our views."

Sainz's teammate Lando Norris finished best of the rest in Bahrain with a sixth-placed finish to take his first points, having made two consecutive Q3 appearances.

But Brown thinks that the battle in the middle of the pack is so close that results will swing dramatically from one weekend to another.

"We definitely feel we had a made a step but it is close in the midfield," he said. "There is just nothing between fourth and ninth.

"You need the team to execute well but on the drivers we are really pleased with how Carlos and Lando are on it.

"If you look at some of the other teams, some of them have a divide between their drivers, so when it is such a close race everything is going to count.

"I am really pleased we have the two drivers we have, because that can make a difference in the team championship. So for us it's just head down and we've got to keep working hard because it is a development war."