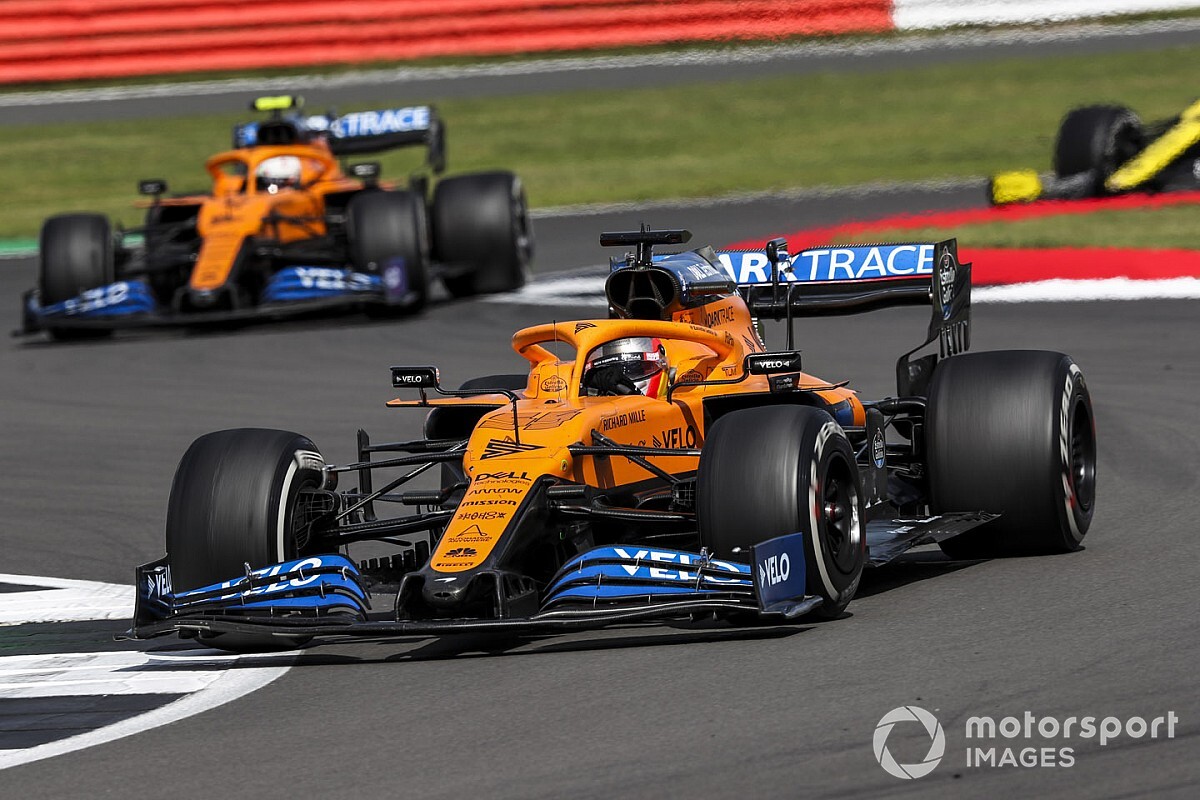 McLaren is weighing up whether there could be gains to be made in moving away from a high rake concept for its 2021 Formula 1 car.

Amid a growing belief in the paddock that the high rake design pioneered by Red Bull may have hit a ceiling of development, McLaren says it is not totally against moving towards the low rake design that Mercedes is putting to great use.

But the team’s technical director James Key admits there are big risks associated with making such a dramatic change of concept – especially with next season being the final year of the current rules set.

Speaking to selected media including Motorsport.com at Silverstone on Thursday, Key said that he accepted views from others that the high rake benefits may have hit their limits.

However, even if the team concluded that a low rake design could be better in the long term, there would still be some short term pain in changing car philosophies in such a way.

“It's risky, you know, but I think there is, from our own studies, some evidence, that you could see how both [concepts] could work,” he said.

“And while I don't think the high rake philosophy is dead necessarily, it does make you step back and think, well, maybe there is more out there that we could be finding at a lower rake. And in fact we've got some ideas and thoughts on how that might work.”

Key says the issue McLaren needs to be comfortable with before making a change would be in making sure it recovered any downforce losses it suffered in the short term as it learned about how to make the new concept work.

Racing Point switched from a high rake to a low rake philosophy this year, and it admitted that it initially started out what would have been several seconds per lap slower with its design when it first began work on it in the wind tunnel.

Key added: “Making the transition means you've got to go through all those troughs and there's not an awful lot of time to do that. So I think we'll have to see for anything for next year, given that it's the last year of the regs, as to whether you could make such a big change in the space of a year.

“There clearly could be something in it and I think there are some benefits. There is an obvious CofG (Centre of Gravity) benefit, but there's possibly some other characteristic benefits as well which favours that approach.”

Key says McLaren needs to be especially cautious because, with all-new cars coming for 2022, any gains it does make may only have a limited shelf life.

“In practice I think it's very difficult to change philosophy in the space of a year,” he said. “I know one team has done it, but there is a big question about that.

“The reality is to change the concept of your car so dramatically, particularly when you don't really have a follow up to that afterwards, when you're got new regs coming, whether it would be sensible or not. I think that is a different question.

“It is aerodynamically a wholesale change, as you really are starting from scratch with some of your understanding. But I think what we've recognised a bit, and I think probably others have as well, is that you can kind of see why that could have some benefit.

"The question is, can you integrate those principles with your current understanding? That's the timescales that we're really working on for next year I think.”

Key said that one factor speaking in favour of the switch was that it would not require any major mechanical changes.

“Mechanically I don't think it's actually going to be that different, because we talk about millimetres ultimately. It's not like there's a massive change.

“I think your suspension operating ranges will be very similar, as it's just really where you set your car up. And that's much easier to adjust than a wholesale change of suspension internals, for example. So mechanically it is probably possible. Aerodynamically, I think it's very difficult in the space of a year.”