The Brazilian met up with all his engineers to get up to speed on the development of the new car.

Maranello – He hadn’t been at Maranello for just over a month, when he was there for the Christmas festivities with the Ferrari staff and their families.

Apart from the snow, which is still hanging around after it fell over the past few days and the building site of the new Scuderia headquarters which is taking shape, nothing much has changed here for Felipe Massa, now truly a veteran with the Scuderia.

Hot on the heels of the week of Wrooom and the footballing interlude yesterday afternoon at the San Siro, the Brazilian met up with all his engineers to get up to speed on the development of the new car and he was able to have a seat fitting on the first chassis, currently being built up in the Car Assembly area.

The day ended with the first video-chat of the year with the fans on the Prancing Horse site (www.ferrari.com.) The questions lasted forty minutes and came from all over the globe with a whole host of questions for this virtual meeting. 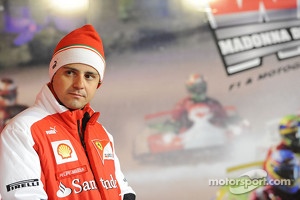 Felipe tackled all sorts of topics, both personal and professional. Asked what the fans could do for the team, the Brazilian replied that supporters of the Reds already did more than expected and there was absolutely nothing else he could ask them for.

Quizzed about the first half of last season, Felipe explained it was a period he had been able to put behind him thanks to the support of the whole team, who had always believed in him and of his family which helped him conclude that everyone goes through difficult times, but that one must never lose one’s self-belief.

Massa said there was nothing about his career he would change, because even if he has yet to manage to win the World Championship title, he has won a lot of races and has experienced things that, for better or for worse, have made him happy about everything he has done to date.

Impossible to speculate on the outcome of the February tests, although they are definitely important when it comes to being well prepared for the first race, without attaching too much importance to how quick the car might be in these tests, because Formula 1 is a sport where thing can change very quickly.

On the topic of social networks, Felipe said he was keen on them, as a means to let people know more about him, without going too far though, outside of the working environment.

Indeed, Massa was keen to give an insight, on the network, about the time he spent on the slopes of Madonna di Campiglio, at the Philip Morris Press Ski Meeting, Wrooom, along with his team-mate Fernando Alonso and the rest of the Ferrari crew of Giancarlo Fisichella, Marc Gene and Luca Badoer, showing that with friends and colleagues, he is a guy like any other who enjoys a laugh and a joke.

Felipe has not yet given any thought to what he will do when his time in Formula 1 comes to an end, but will do so when he stops, because for now he still wants to race and to do that requires 100% concentration.

Then he will see, certainly something involving engines, which are his great passion. Physical preparation is important in the time between the end of one championship and the start of the next, involving training hard every day and in this, Felipe is lucky as he really loves sport: after Formula 1 comes football, tennis and skiing, apart from the fact that he belongs to a team for whom he gives and always will give, his maximum effort.