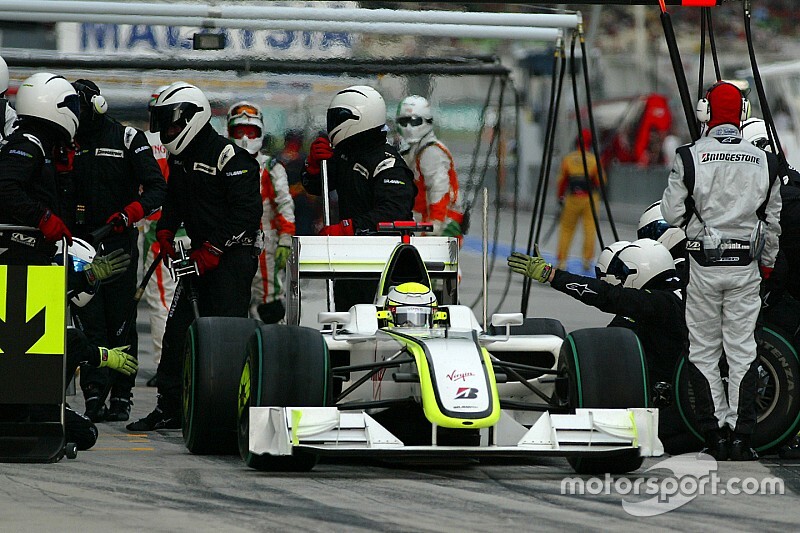 On April 5th 2009 a dramatic afternoon in Malaysia saw Jenson Button and the Brawn GP team continue their flying start to the season by scoring their second victory in eight days.

A storm of monsoon proportions caused the race to be suspended, and while the weather eventually cleared, the impending gloom made it impossible to run the remaining laps.

In Australia the previous weekend Button had taken the chequered flag with the field lined up under caution behind him. At Sepang he didn't even manage that, learning that he'd won while sitting in his car on the grid, waiting for a resumption that never came. 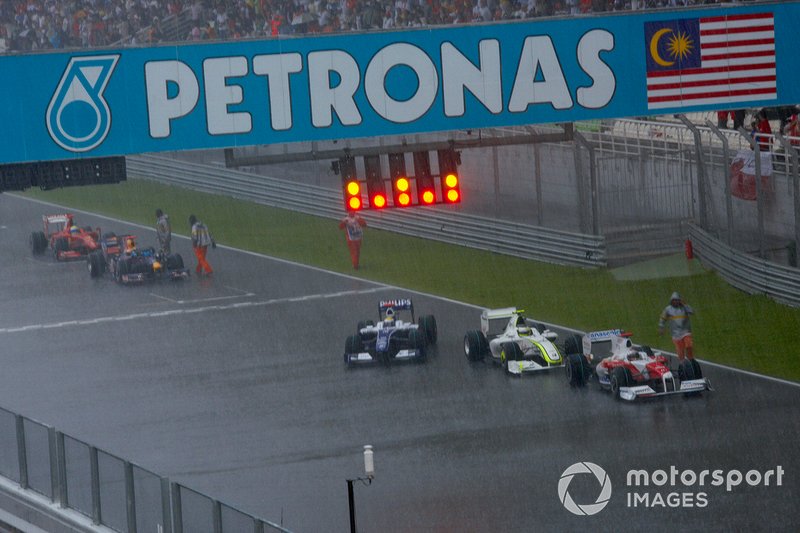 It was an unusual end to an extraordinary afternoon, one that saw half points awarded for only the fifth time in the sport's history, and regular pacesetters McLaren and Ferrari earn just an eighth place between them.

Indeed for many the enduring image of the day is not of Button celebrating, but of Kimi Raikkonen in civvies and eating an ice cream after the stoppage – while his Ferrari team worked to get his car back into the race…

The eventful afternoon allowed everyone to take their minds off the big story of the week. The reconvening of the Australian GP stewards and subsequent disqualification of Lewis Hamilton from his Melbourne third place – for not telling the full story about waving Jarno Trulli by in the safety car queue – had dominated the headlines, and the beleaguered driver and his McLaren team were under fire from all sides.

With rain threatening an exciting Saturday qualifying session saw Ferrari and McLaren struggling as Brawn continued to upset the established order, the car's double diffuser having been passed legal in Australia. 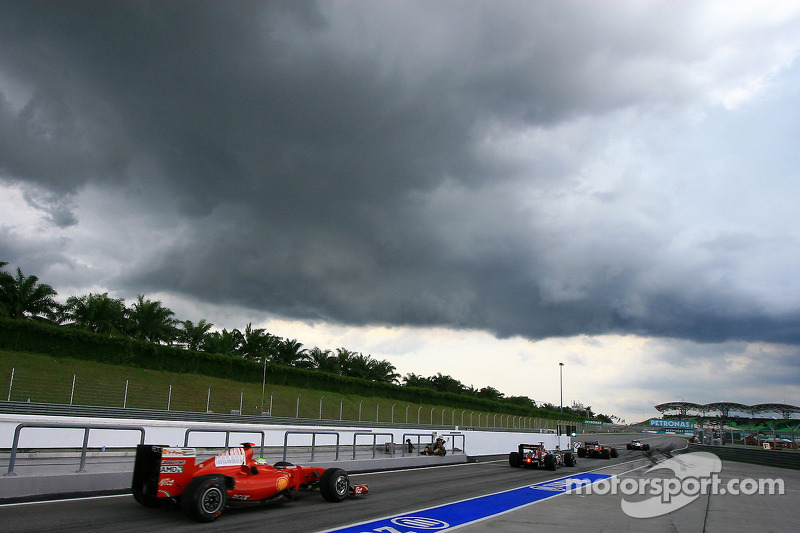 There was drama in Q1 when both Ferrari drivers stood on their times from their first runs, assuming that they would be fast enough to get through anyway. However the field was so closely packed that as Felipe Massa sat helpless in the garage he was bumped down to 16th, and out of Q2. Team mate Raikkonen just scraped through in 14th.

Then in the second session it was McLaren's turn to suffer, as Hamilton took 13th, and team mate Heikki Kovalainen 14th, neither man thus progressing into the vital Q3 session.

Having struggled a little in practice on Friday Button got it just right to take his second pole in two attempts.

Jenson's closest challenger was Trulli, the Toyota driver coming within 0.106s of Button's time as he claimed the other front row spot.

Sebastian Vettel continued to show good form as he took third for RBR, a team still searching for its first win. However, the German was carrying a 10-place grid penalty after a clash with BMW's Robert Kubica in Australia, and thus dropped down to 13th. Rubens Barrichello was fourth in the other Brawn, but he moved back five places after having to take a new gearbox.

A much-criticised decision to move the local start time from 3pm to 5pm, mainly for the benefit of European TV audiences, left no safety net in terms of daylight. After the long wait the race started in dry conditions, albeit with rain in the air.

Button made it hard for himself from the start. Having only just managed to get on pole, he was beaten away by the Williams of Nico Rosberg (promoted to fourth on the grid by the Vettel/Barrichello penalties), as well as Trulli and the KERS-boosted Renault of Fernando Alonso.

Crucially Jenson soon passed the fuel heavy Alonso, but he still had two cars ahead. The significance of the ongoing the double diffuser controversy was made only too clear as the Williams, Toyota and Brawn – three cars thus equipped – left everyone else trailing. 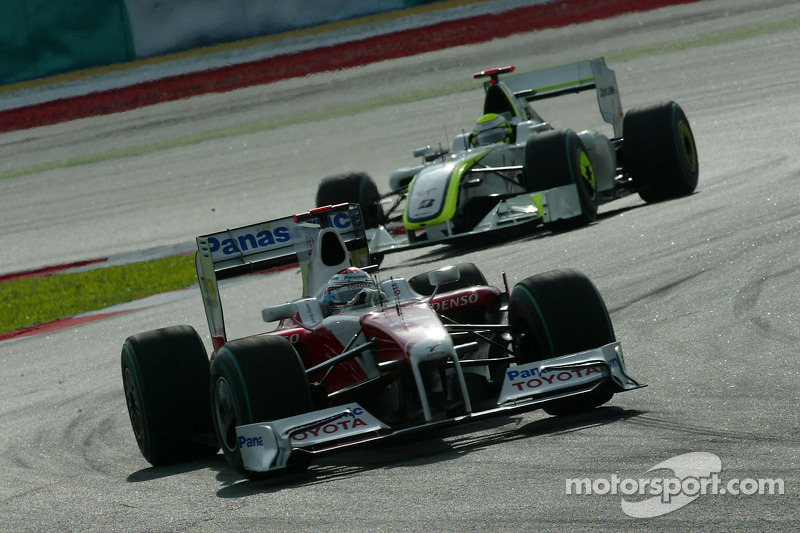 Button carried a few extra laps of fuel in qualifying, and having sat patiently in third until his two rivals pitted – Rosberg on lap 15, Trulli two laps later – he took advantage of a clear track to put on an extraordinary spurt. The true potential of the Brawn was evident as he recorded a best lap that was a full second quicker than those of the team's main challengers.

When he pitted he emerged in the lead, still on dry tyres despite the darkening skies and signs of a storm on the horizon. Ferrari meanwhile made an ill-advised decision to put Raikkonen onto wets. The Finn tumbled down the order as he waited in vain for the rain to come, and his tyres were soon destroyed.

As the first drizzle finally arrived Button initially extended his advantage with some great driving on slicks on a gradually soaking track. When he finally pitted he was one of many drivers to go straight to extreme wet tyres, only to find that the track wasn't quite wet enough. Toyota's Timo Glock meanwhile had gone to standard wets or inters, and was really flying. Jenson soon went back to inters, but then the heavens opened properly, and he made a fourth stop to go back to extremes.

Ordinarily that sort of indecision, which brought back memories of the multiple stops made at Donington in 1993, would have scuppered his chances. But just about everyone else was equally confused about what tyres to take. With cars slithering around everywhere, and rivers running across the track, Charlie Whiting took the decision to send out the safety car.

And that was followed almost immediately by a red flag, so the field stopped on the grid and the race went into suspended mode. 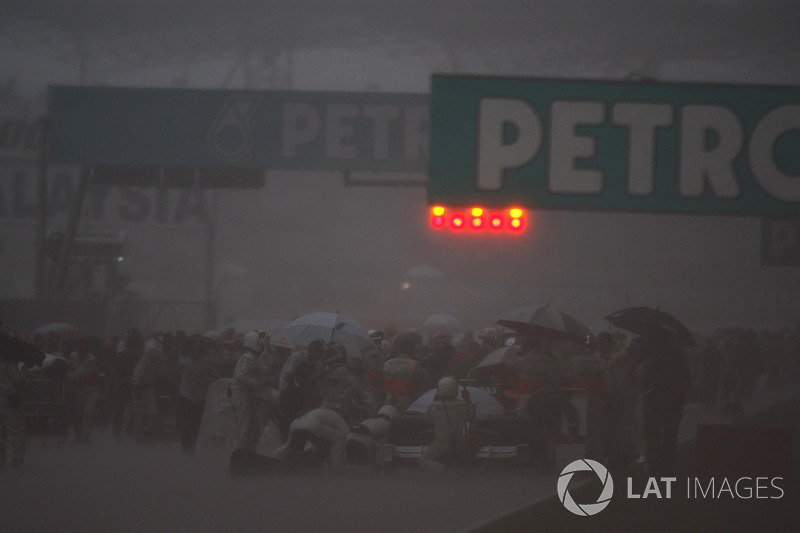 The grid reassembles after the red flag

"After my first change to wet tyres I was just skating around all over the place, I was just so slow," Button said later. "But nobody else on the extreme wet was really much quicker. I was trying to look after the rears, because I was getting oversteer, knowing that it was probably going to rain.

"The guys came on the radio and said Timo was very quick on the inter, so I pitted for the inter and came out behind him, and as soon as he went past me into Turn One I saw that his tyres were slick. Then I struggled massively to try and get the tyres working, but then Timo was struggling more, and then it was about making the call for wets, which we did, and then it was just crawling round after the safety car."

It was clear that Jenson was the leader, but there was still a little confusion as to the exact order behind, as officials sorted out who was where when the flag came out. As the clock ticked by the rain abated and drivers either sat in their cars, or mooched nervously around the grid.

Raikkonen, who pitted just before the race suspension with a KERS issue, assumed his day was done – hence his ice cream. However, the Ferrari guys continued to work away on his car. There was always a chance that he might be able to restart, albeit with a little extra personal ballast now on board…

Alas it wasn't getting any lighter, and Whiting eventually decided that there was not enough daylight left to justify restarting the race. Inevitably this caused questions to be asked about the wisdom of moving the start time so late, especially when the risk of bad weather meant that it was always going to be hard to squeeze in the full distance.

All of that was of little consequence to Button, who on learning the news alighted from his car and kick started his celebrations. Officially the race had lasted just 55 minutes, with only 31 of the scheduled 56 laps run. In terms of elapsed time it was the third shortest in history, after Australia 1991 and Spain 1975.

The premature conclusion meant that Button and the rest of the top eight finishers scored only half points, but the man himself was happy enough to log another victory.

"The boys couldn't tell me because the radios weren't working, it all got too wet," he explained. "They came over to the car and said you've won the race. I was very happy obviously, winning the race. You only get half points, but for me it was the win that matters, it wasn't the points.

"And it was the right decision, to call the race when they did. So I jumped out, and gave everyone a hug." 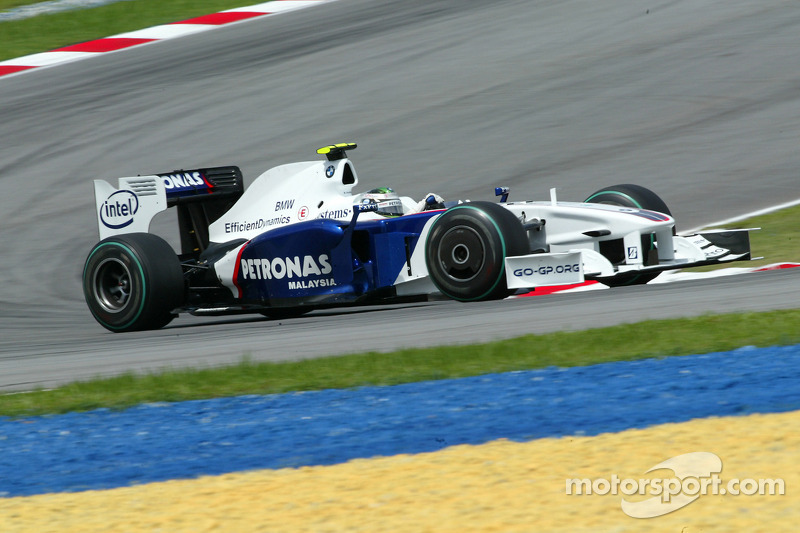 Second place went to BMW's Nick Heidfeld, who had made a good call for extremes that coincided with his first scheduled stop. By resolutely staying out on them, he jumped up the order, earning a position that was unrepresentative of BMW's real form. In fact he'd spun just before the red flag and been passed by Glock, but on a count back to the previous lap, he regained runner-up spot.

Glock's good decisions – initially for inters and then an early move to extremes – also paid dividends, and he still secured the final podium place, ahead of team mate Trulli. Barrichello moved up to fifth, but both he and Jarno were lucky to get away with pit stops just as the flag came out, because the final order was taken from the previous lap.

Red Bull's Mark Webber was classified a frustrated sixth, while his team mate Vettel was one of the victims of the flooded track, spinning into retirement. Hamilton, who spun just before the stoppage, finished a subdued seventh, while Rosberg was eighth, his early lead for Williams squandered by strategic fumbles.

A single point for Lewis (half of the two then offered for seventh place) was small consolation for McLaren after its nightmare weekend – thanks to the Melbourne disqualification it was the only score in two races, and left the team a lowly eighth in the World Championship. 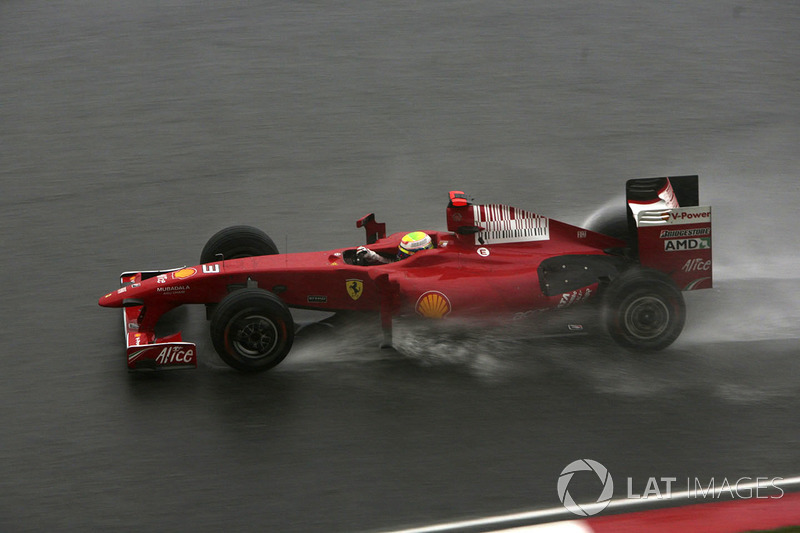 The situation was even worse at Ferrari as Massa finished outside the points in ninth, while Raikkonen never did get to restart after his snack. Incredibly, the reigning World Champion team had scored no points in two outings, and was officially classified last. This was going to be a strange season...