Lynn not allowed to push with 2017 aero package 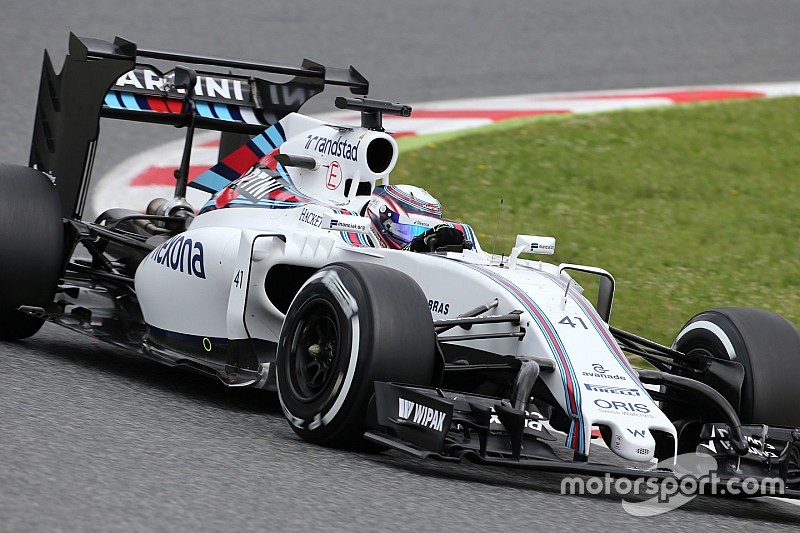 Williams test driver Alex Lynn says he was not allowed to push while running with the team's package to simulate 2017 downforce levels during F1 testing in Spain on Tuesday.

The Grove team caused a stir in the morning when it ran with radical-looking front and rear wings aimed at evaluating the downforce levels expected once new rules come into play next year.

However, the Briton said he could not judge the real effect of the package as he was not given permission to push to the limit.

"I didn't actually push that hard on it," said Lynn at the end of the day. "I wasn't allowed to. I think you'll probably see Felipe [Massa] do a bit more on it tomorrow, so he'll probably be the better one to ask tomorrow.

"It was a bit of a shame because it looked like it would have given some good downforce, but I wasn't quite able to do anything on it.

"It would be nice if it was [legal]. It looks like something out of the 90s. The team is trying stuff out for the future and see what kind of benefit it makes," he added.

"We were on the soft tyres, but I was only allowed to do Sector 3 pushing, just to try to simulate the slow speed."

Lynn finished the day in ninth place in the timesheets with 86 laps, and said getting back in the groove was much easier for him his time, having not driven F1 machinery since last year.

"I think it can't get much better than doing a lot of laps around this track in a Formula 1 car, especially when you try a lot of stuff in the car," Lynn added.

"Hopefully we made some good improvement for the next coming of races, that's what we are mainly focussing on. And for myself it's another day in a Formula 1 car, so that's really valuable.

"It felt a lot easier than the last time I drove. Maybe it's just another year's experience of driving higher-powered cars, but it felt much easier."