Off the back of a stellar start to the season, Kimi Raikkonen has dropped from second in the world championship to third, following two less impressive outings for the black E21 in Monaco and Canada.

"It hasn't made the world championships any easier for us," Lopez admitted to Finland's Turun Sanomat newspaper, as Lotus also drops to fourth behind Mercedes in the constructors' standings. 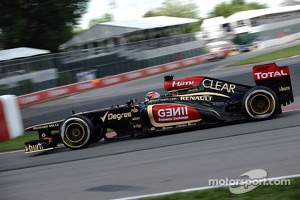 "It is clear we cannot afford a third consecutive miserable weekend at Silverstone," he added.

"Monaco is Monaco and we had a bad start to the weekend, off on the wrong foot, but we have now suffered badly in terms of both of the championships (after Canada)," Lopez continued.

"This cannot be accepted. For Silverstone, I expect us to be absolutely as strong as we were before Monaco."

Lopez also rejected speculation lead driver Raikkonen, amid speculation he has been offered Mark Webber's Red Bull seat for 2014, is growing frustrated with the situation at Lotus.

"Everything is perfectly ok with Kimi," he said.

Massa 'calm' about future beyond 2013 contract

Making the right calls: The strategic battle for supremacy in Canadian Grand Prix