Gasly has been one of the standout performers of the 2021 F1 season, qualifying in the top six on six occasions and only missing the Q3 shootout once.

The pace of the AlphaTauri AT21 has helped the Frenchman hold eighth in the drivers' championship after the Styrian Grand Prix, partly thanks to a shock podium in Baku.

After a strong start to the season, the Faenza outfit had a wobble in the Portuguese and Spanish Grands Prix, with Gasly only just managing to finish 10th and teammate Yuki Tsunoda remaining point-less in both races.

Technical director Egginton said the team asked itself "a lot of questions" about its rough Iberian spell and believes it learned valuable lessons about the car's low-speed performance in those two races. Egginton thinks the fact that the team has since managed to cure the car's "laziness" in cornering has been key in making progress in F1's midfield.

That approach paid off big in Azerbaijan, where Gasly scored his third F1 podium, and has since continued to pay dividends as AlphaTauri currently holds fifth in the constructors' championship ahead of Aston Martin.

"After Portugal and Spain we had some concerns on our low-speed performance," Egginton said in Austria. "We were not fantastically happy.

"Then we went into Monaco and we played around with a setup a bit. It's a bit of a unique circuit and you can't always take too many conclusions, but we thought we did some sensible learning there.

"And then our attention focused to a few of the balances and trying to get the car to be a little bit less lazy and rotate better in the medium speed, and [in] Baku we had good car rotation at low-speed corners, the car seemed to rotate quite nicely.

"Paul Ricard was challenging for everybody with tyres and track temperatures and balance, but although the car was difficult to drive, it was competitive, far more competitive than we've been in the previous years. So again, we felt we learned something."

Egginton pointed out the team's progress has also been evident in the first Austrian race weekend, in which Gasly qualified sixth and rookie Tsunoda was eighth fastest, but started from 11th due to a penalty. 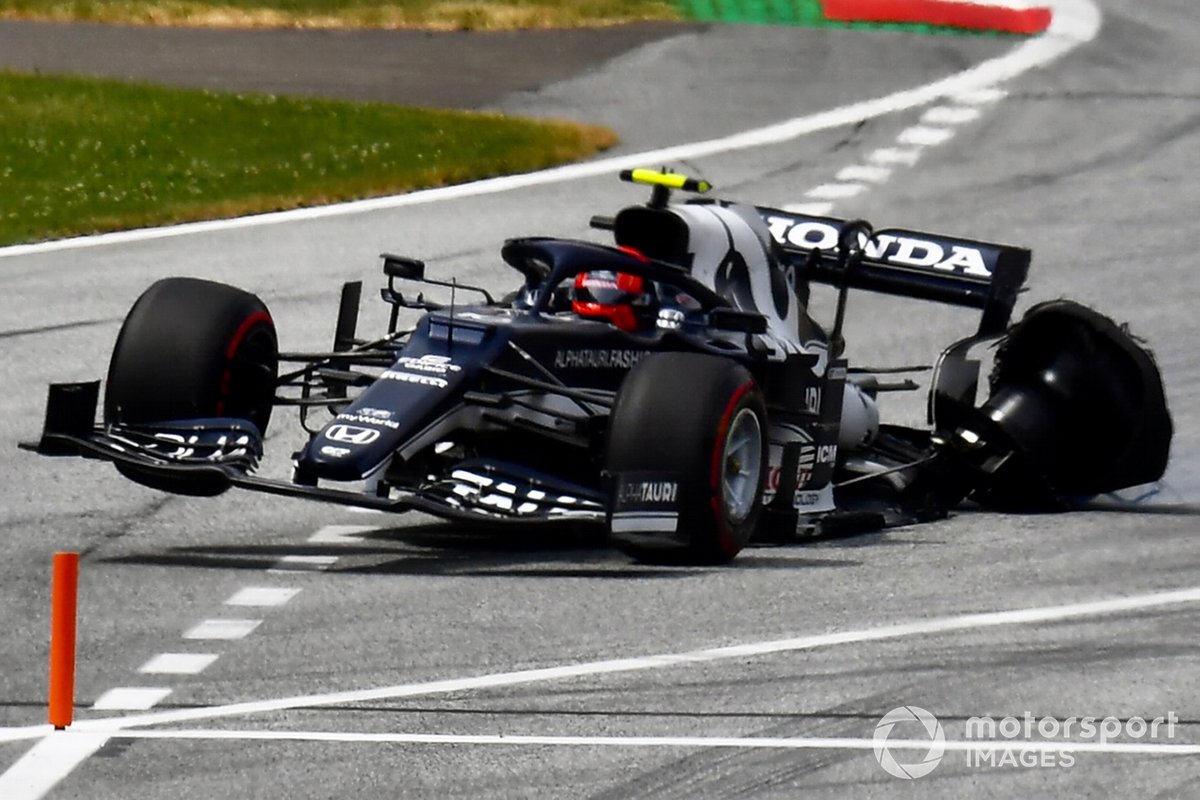 Pierre Gasly, AlphaTauri AT02, limps back to the pits and into retirement with a puncture and damage on the opening lap

While Tsunoda grabbed a point in 10th, Gasly had to retire after being tagged by Charles Leclerc's Ferrari on the opening lap.

But before Sunday's events Egginton said AlphaTauri had been "answer a few questions" and cure the car's key weakness.

"We sort of put all that together and knowing the nature of this place, not so much low-speed content, a lot of medium speed, and you need a good stability and rotation and it's all come together," Egginton added.

"So, there's a full story. I think the engineers have put everything together, all of the lessons we've learned in recent events, and it's worked quite well. We feel we've got a better understanding.

"We've answered a few questions and the car's going quicker as a result of it."