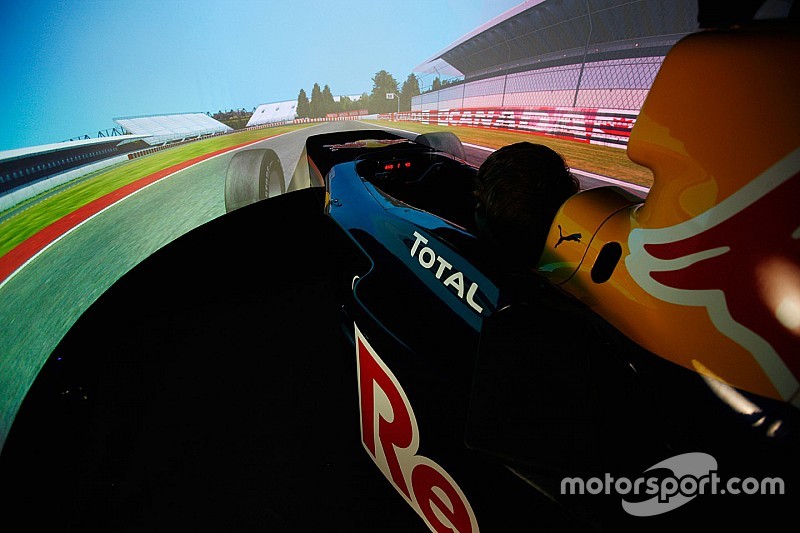 The introduction of a ban on most on-track testing a few years ago forced Formula 1 teams to adopt new and innovative ways to develop their cars.

Strapped in the cockpit of a 'virtual' car, any driver can now drive hundreds of laps around any circuit on the planet.

Essentially, an F1 simulator is made up of a chassis, or tub, attached to electromechanical actuators, controlled by powerful computers, which run the operating software and contain the computational models of the cars and the tracks.

In response to input from the steering wheel and the pedals, the actuators move the entire cockpit around, which simulates the acceleration, braking and lateral forces that the driver feels.

"We use a real F1 chassis bolted to a Hexapod platform, which is used in most commercial simulators," said Damerum.

"The Hexapod is the only part of the device that we purchased. Everything else was produced by Red Bull Technology, including the pedal assembly, the seat and the steering wheel from the real RB11."

Sitting in the tub, the driver faces a curved, 180-degree projection screen. His hands hold the genuine steering wheel of the RB11, which is connected to the main computer.

The simulator is equipped with sensors that keep a record of every input of the driver. It is used by rookies to learn the new tracks, by the veterans to refresh their memory and, most importantly, to validate the set-up of the real F1 cars.

"We model the cars and the tracks in our systems," the Red Bull engineer explained. "These computational models are based on the actual mechanical, dynamic and aerodynamic characteristics of the RB11. So we can alter many more things than we ever could on the real car.

"We can change the pressure and wear of the tyres, the aerodynamic downforce of the car, the engine characteristics and the ground clearance of the chassis, we can simulate the drafting effect from other cars... basically, everything.

"Engineers also use the work done on the simulator to compare various settings. Does the car become twitchier with less downforce? How do the lap times compare?

"They can now answer these questions, and others, without ever having to do a single lap of an actual race track," Damerum added.

Various scenarios can be tested

"We prepare a test programme just like we'd do for a track day," he explained. "The driver starts with a few warm-up laps to get used to the distinctive environment of the simulator, especially if he hasn't been in it for some time.

"If it's a driver training session where we try to improve his technique [like they do with Toro Rosso's rookies Max Verstappen and Carlos Sainz], we'll only do five or six laps at a time, and then we go over the recorded data and the engineer reviews these with his driver.

"If we're getting ready for a grand prix, we start the day with well-known, basic settings on the car. Once the driver is comfortable and his lap times are consistent, we start the test session.

"This includes rapid set-up changes so that the driver can feel how the mechanical and aerodynamic modifications alter the balance of the car. We can also simulate entire races or qualifying sessions. We can even reduce the grip of the track's surface and simulate light rain."

With four F1 drivers and several junior drivers to accommodate, the Red Bull simulator is used to the maximum, almost 24/7.

"We broke our all-time record in 2011 when all four drivers from both Red Bull Racing and Toro Rosso used our facilities to race every grand prix on the calendar!" Damerum concluded.