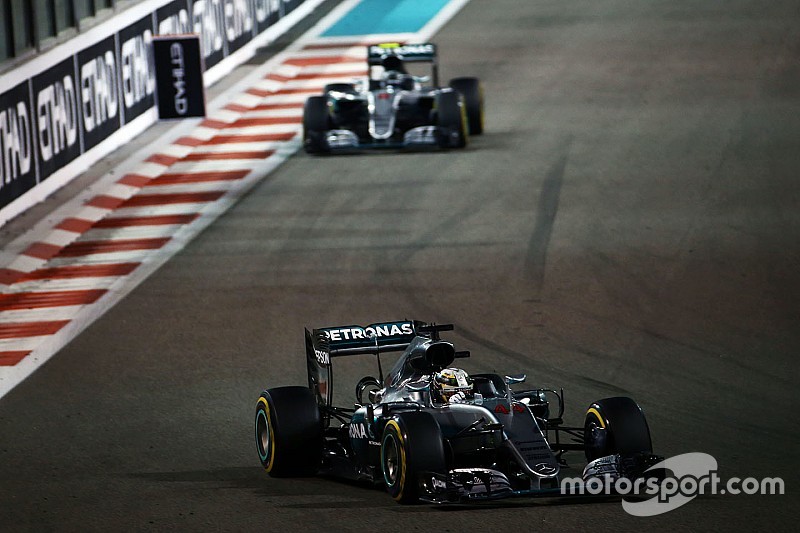 Red Bull boss Christian Horner says he never expected Lewis Hamilton to do anything other than try to back Nico Rosberg into the pack in Abu Dhabi, and it was "naive" of Mercedes to have thought he would do anything else.

Horner had said before the weekend that Hamilton's only option to win the title was to play a tactical game of trying to slow Rosberg down so that other cars could overtake him.

Speaking after the Abu Dhabi Grand Prix, when asked if he was surprised about the extent to which Hamilton did it, Horner said: "I wouldn't have expected him to do anything different.

"He played completely within the rules. Winning the race wasn't going to be enough for him today, he needed cars between him and if he'd have charged off into the distance he would never have…that wouldn't have created that possibility.

"He won the race as slowly as he could, it's only like in a football game where a team might protect from the opposition by kicking the ball around and not enabling the opposition to get hold of the ball. I didn't see that he did anything wrong today.

"There's only two drivers competing for the world championship, it was totally obvious that he was going to do that."

Mercedes said after the race that it had been unsure about whether or not Hamilton would back Rosberg up or race off in to the distance to prove a point.

Horner though thinks it "naive" of the team to have expected anything different with the world championship at stake.

"With where they were at, it was just down to those two guys," he said. "So it was only ever going to be that kind of battle between the two of them.

"Congratulations to Nico, he has driven a great season this year. He is a very worthy world champion but it was naive to think that there would be any different approach to this race with what is at stake."

When asked what he would have done about Hamilton if he was his boss, Horner said: "We know that Toto likes to control most things in the paddock including other teams' drivers… so you could not expect any different.

"It was obvious that coming into the weekend that was his only chance of achieving the result he wanted. It would be unfair to criticise him."

When asked if the tensions at Mercedes were something that Red Bull could exploit, Horner said: "I understand that Toto has suggested Lewis followed my instruction rather than his and he should come and drive for Red Bull...but maybe it works better to talk directly to the driver rather than the father."

Ocon and Wehrlein at odds over Abu Dhabi clash