An extremely important Formula 1 battle has been brewing away from the track in 2020, and enters its most important phase as the clock ticks past midnight on December 31.

At that point, the 2021 regulations come into force and teams will be able to conduct CFD and wind tunnel work with their 2022 designs.

Working on aero for the new era is something that’s been prohibited until now, even though teams have had sight of the regulations for some time.

The reason that the FIA has restricted simulation work in this way is that it didn’t want to hand the teams with more resources an advantage over those further down the grid.

Amid the challenges of the coronavirus pandemic, ensuring no huge disparity between the teams with money to burn and those without cash was considered a high priority.

But, there are further ramifications to consider too, as the teams will be handicapped differently going into 2021, as Formula 1’s new sliding scale system for aero development comes into force.

The amount of simulation time that’s available to each team will now be governed by their position in the championship, creating a curve that should offset some of the glaring differences that teams have in terms of resources.

The tilting scale grows to an even more significant number from 2022 onwards too, with the lead constructor allowed just 70% of the agreed wind tunnel time and CFD limits.

There is further nuance to the system to consider too though, as the year is also split up into six testing periods which are then affected by the team’s position in both the previous championship and the current one, with each taken into account depending on the period in question.

It is hoped that, over time, this system will close the gap between the competitors but, as with every regulation, there will be ways in which teams can find advantages.

Mercedes, knowing it is going to be hurt more than anyone else on the grid by these changes, seems to have approached the task in a way that’s out of step to its competitors.

For it appears to have fast tracked its 2021 work into early 2020, with the development of the W11 receding much sooner than you’d normally expect.

After all, the W11 was the most dominant car in the field and the fastest in Formula 1’s history, which gave Mercedes the headroom it needed to halt upgrade work early and focus its attention more longer term. 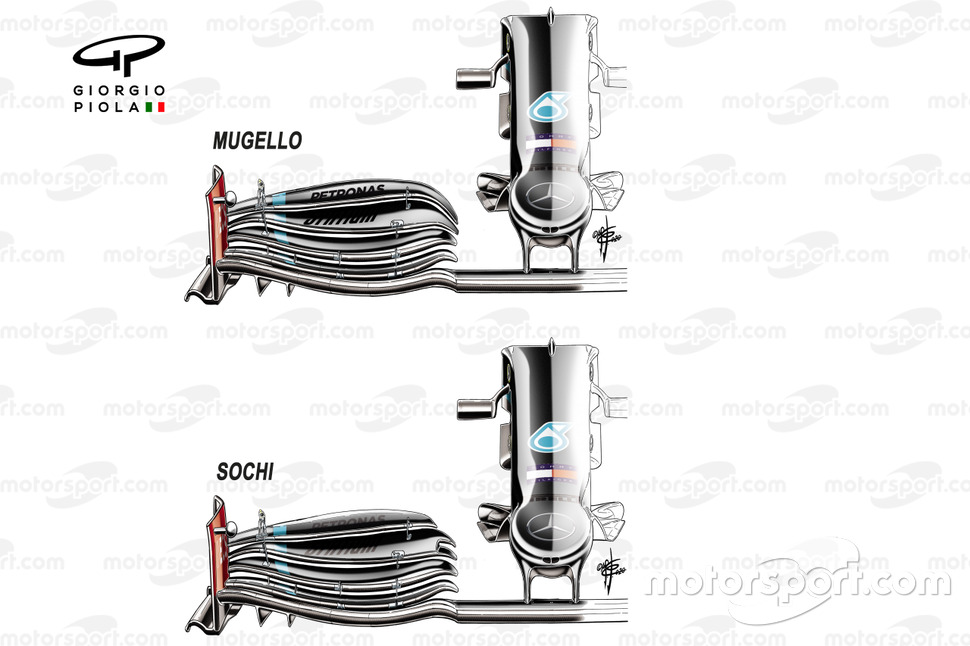 To get an idea of how early it switched off the 2020 pipeline, we last saw a significant development from Mercedes at the Tuscan Grand Prix in September. There, the team introduced a new front wing with a different flap configuration that’s been on and off the car since, depending on the characteristics of the circuit in question.

That doesn’t mean it has not developed the car at all since then though, as there’s always improvements being made throughout the course of a season, especially in terms of weight saving. But, there’s been very little in terms of aerodynamic statement pieces.

Meanwhile, in that same period, we’ve seen the likes of Red Bull and Ferrari, which have comparable resources, completely alter the DNA of their cars, pulling them relatively closer to the front of the pack. 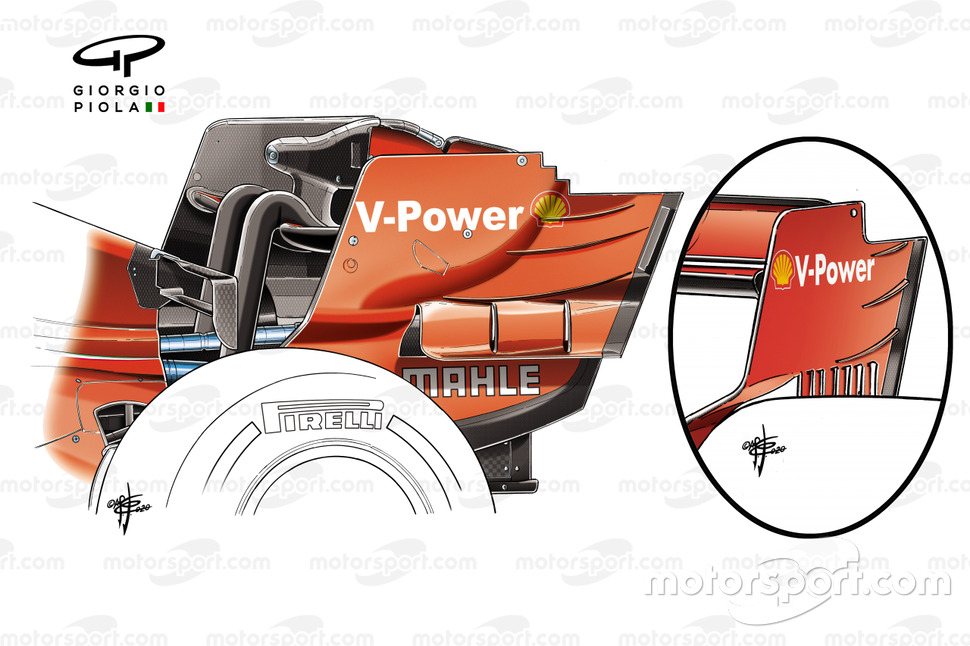 2/13
As part of a U-turn on its development programme, Ferrari altered the position of the plough on its nose, impacting flow through the inlets it creates beside the nose tip.

3/13
Ferrari added a series of arched flaps on top of the turning vane’s footplates in order to pick up the flow it received and give it a gentle show in the right direction. 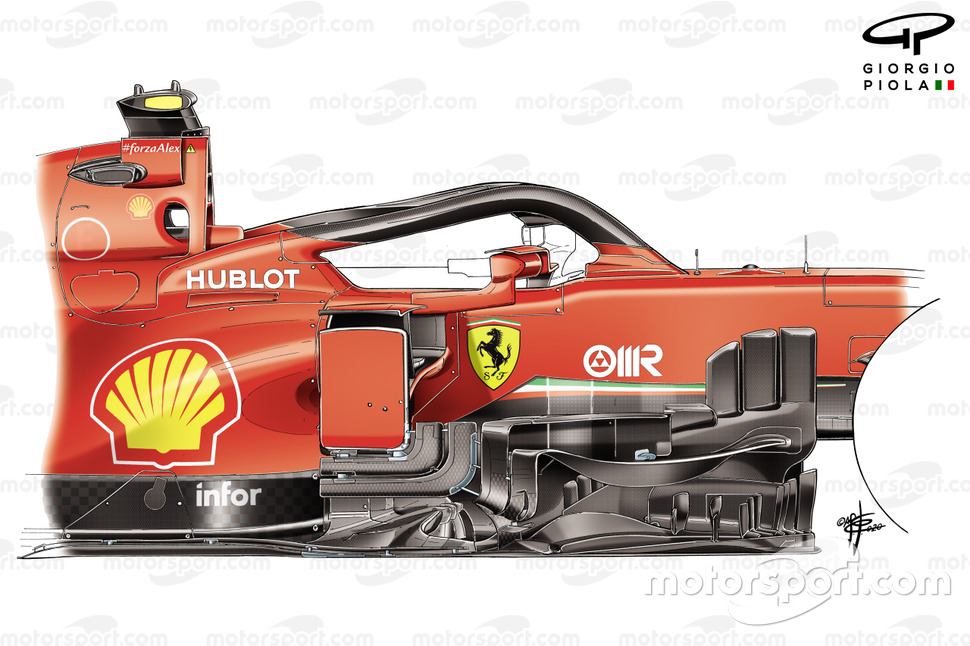 4/13
Changes were made to the bargeboard and sidepod deflectors to better deal with the revised structures that were being created ahead, and also improve how they deal with the wake turbulence created by the front wheel. 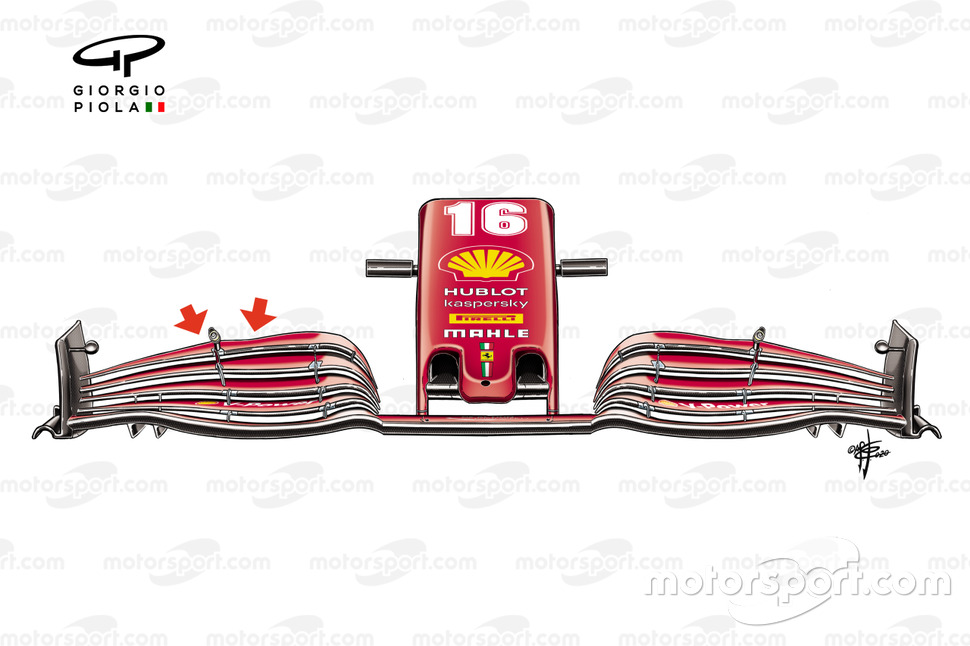 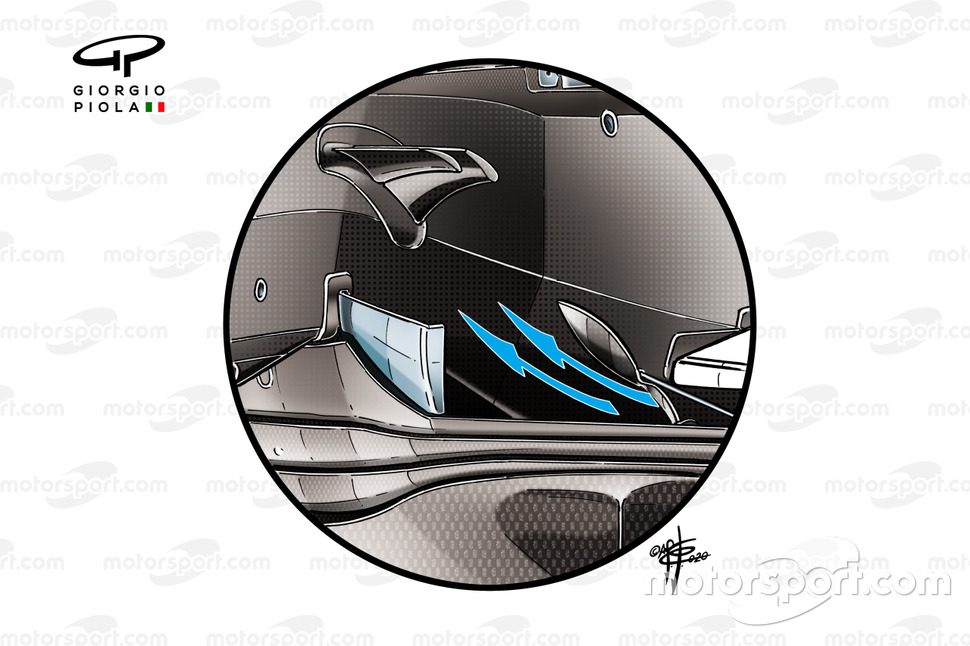 6/13
At the rear of the car, the roof panel used on previous cars to create a tunnel in the floor beneath the crash structure was pressed back into service. 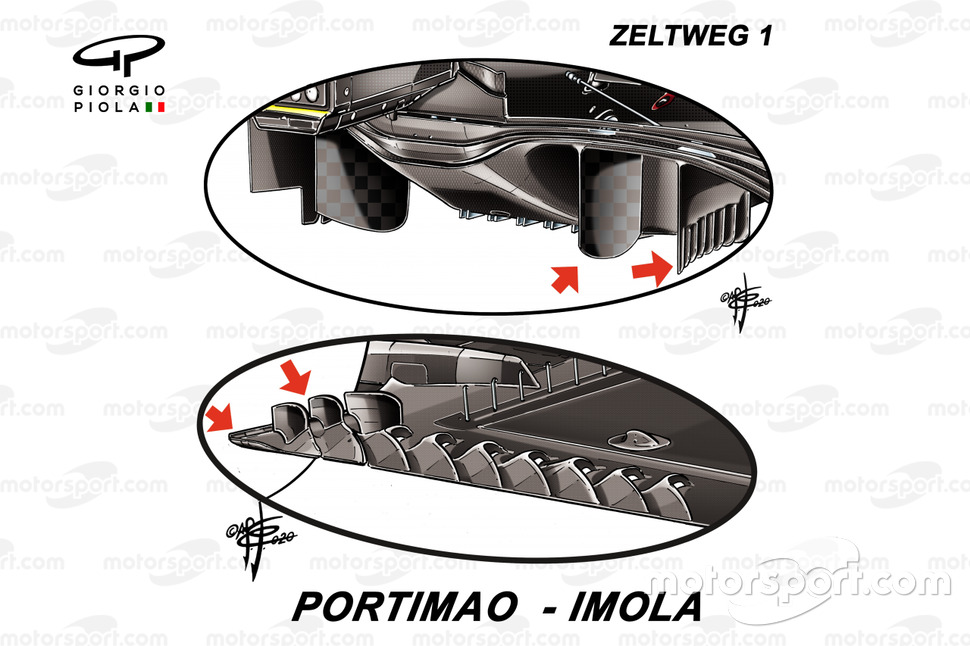 7/13
The diffuser was also subject to a retrograde, with the team reverting to a specification used right at the start of the season. 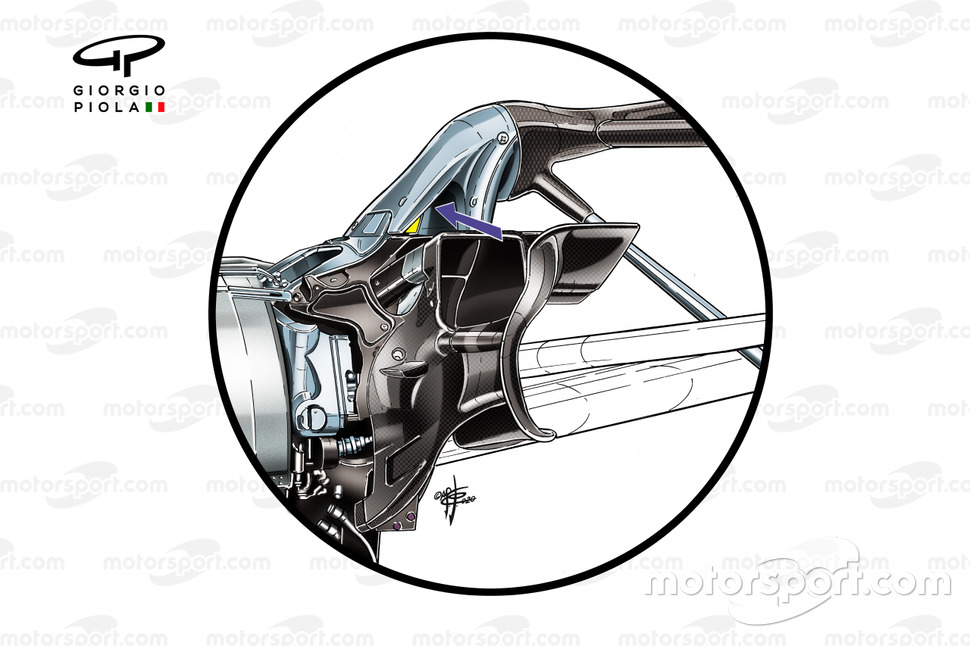 8/13
A new rear upright was on the agenda for Red Bull. Taking inspiration from Mercedes, it features a triangular opening that allows air to flow through. 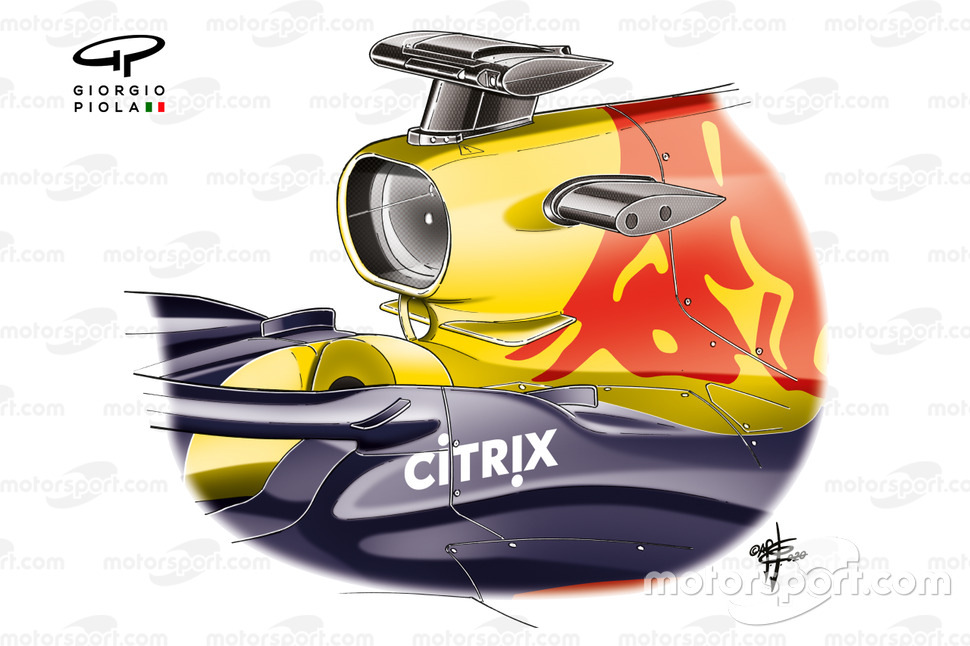 9/13
A small winglet was added on the outside of the halo’s frame in order to adjust flow down over the sidepod and engine cover.

10/13
Multiple changes were made to the outboard portion of the RB16’s front wing, with changes that affected the footplate and endplate most prevalent throughout. 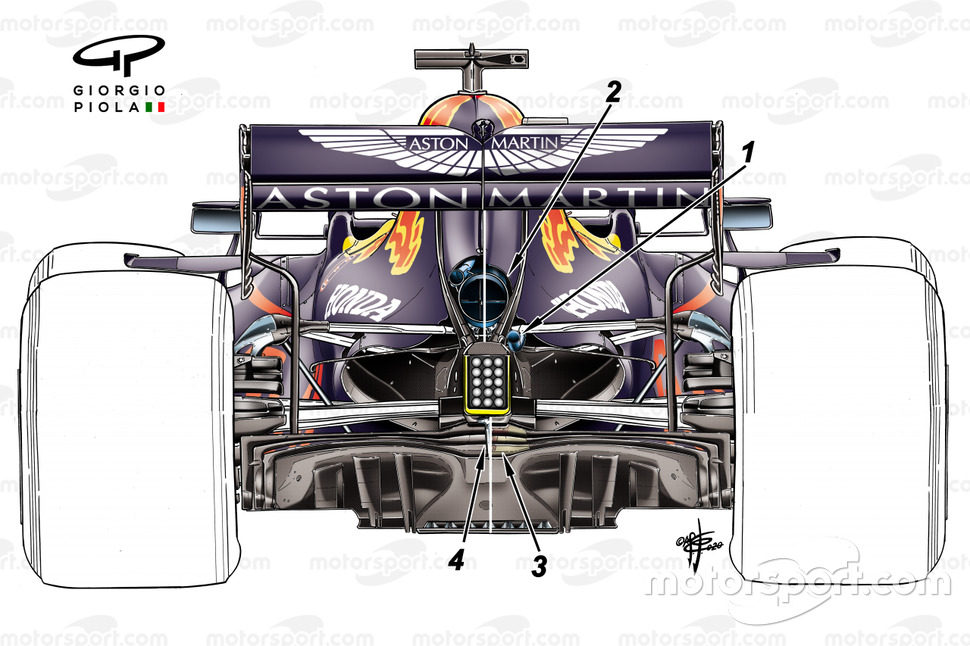 11/13
Red Bull had been the only one to place its wastegate pipework in a higher position [2] but altered this in the closing stages of the season, moving them to a more conventional location [1]. This alteration was made in conjunction with changes to the centre of the diffuser too [3&4]. 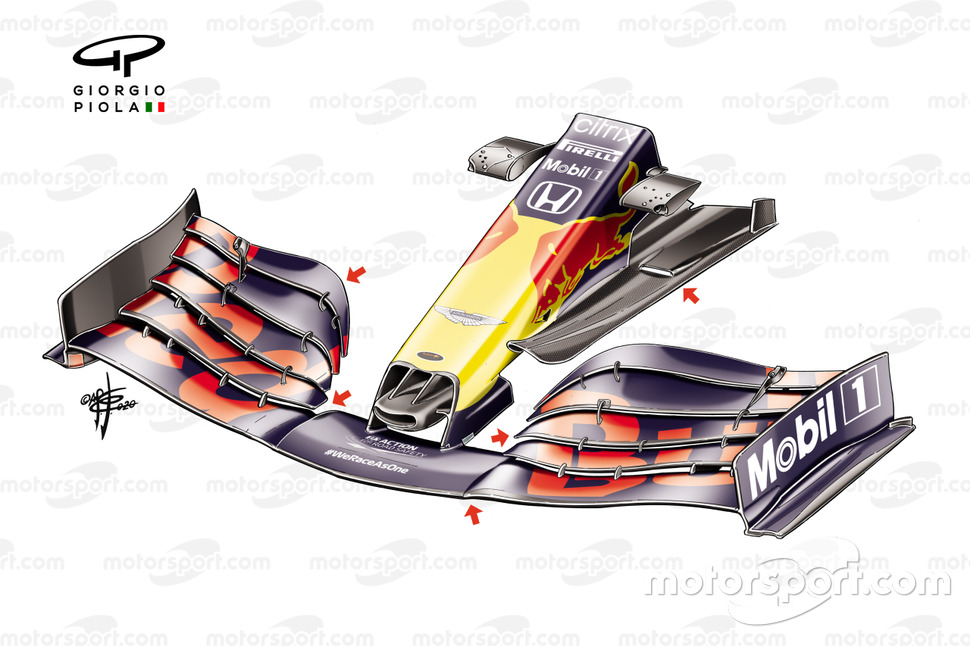 12/13
Another new front wing appeared at the Turkish GP, with its attention switched to the inboard elements, altering the mainplane’s shape and the flap frequency in order that the Y250 vortex be tuned differently. Consequently it added a hole in its cape too, in order that the flow downstream was also altered. 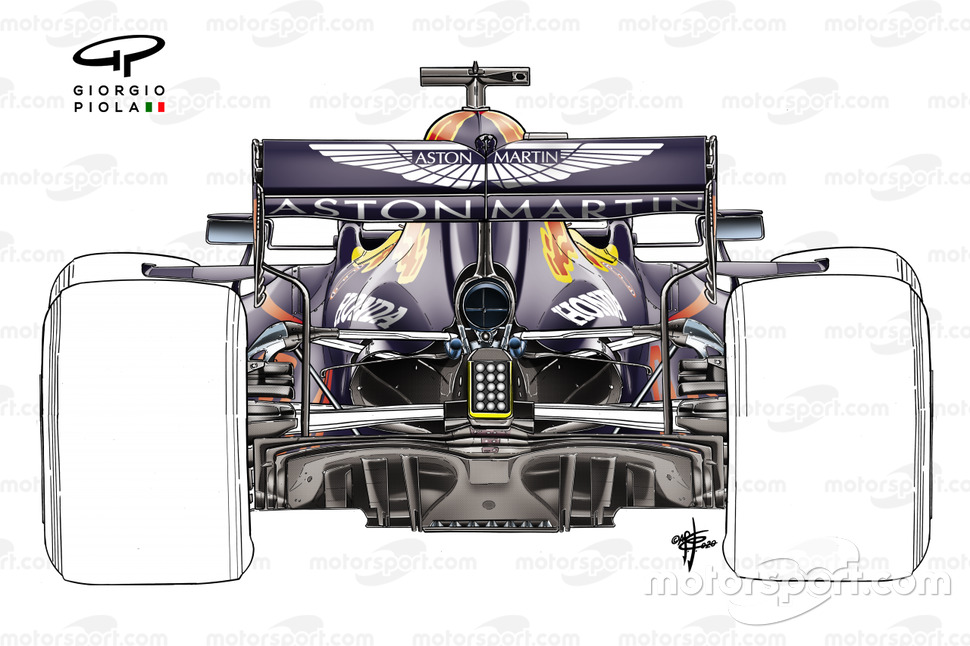 13/13
A new rear wing support was introduced in Abu Dhabi, as the team raced a single pillar, rather than the double one it had used all year.

The changes made by both in the backend of the season have clearly helped to improve its fortunes, but that’s not to say that the work it has done won’t continue to bear fruit into 2021, especially as we have a huge amount of carry over.

Looking to the future

The obvious conclusion to draw here is that Mercedes has spent a large portion of this season concentrating its efforts quietly on 2021, forsaking any larger gains for 2020 in the process.

It will hope the early development of its 2021 challenger will allow it to spend a disproportionate amount of time on its 2022 design, potentially offsetting the percentage losses that the sliding scale will have on it compared to its rivals.

Moreover, the regulations only go as far as limiting the team’s abilities to simulate the aerodynamic impact of its designs.

Therefore, as the clock ticks past the deadline I’d expect teams to have various iterations of their CAD models and scale wind tunnel models ready to test.

And based on what we’ve seen from Mercedes this year, you’d have to expect it will have a head start in that regard. 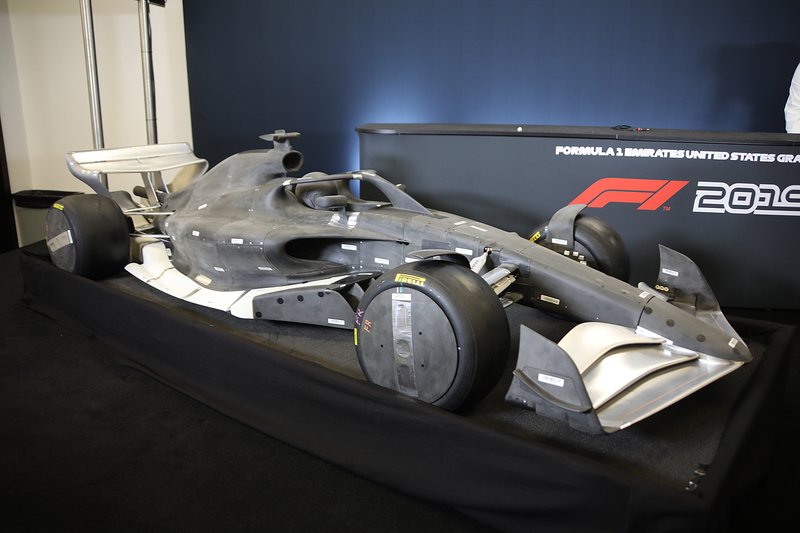