Less than one tenth separated Lewis Hamilton and Sebastian Vettel in a very wet qualifying sessions in Malaysia.

The session got started more than a half-hour after is was scheduled to begin due to heavy rain.

Despite completely different conditions on track, Mercedes continued to flex their muscle leading both the first and session sessions in Rosberg, then Hamilton respectively.

The frist session ended 35 seconds early when Marcus Ericsson hit the wall and narrowly avoided being hit by another car after losing it on the wet and slick rumble strips.

The second session got underway with no Caterhams moving on, but did see the Lotus of Romain Grosjean make it out of Q1, despite two days of struggling with the car. 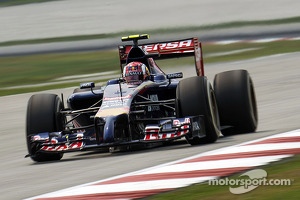 Not long into the second session, another Red Flag was called for debris left behind by a collision between Fernando Alonso and Daniil Kvyat, as the drivers sorted themselves out for the first flying lap.

Ferrari were able to repair the car and send Alonso back on track, grabbing fourth in the final session.

Williams was blanked past the second qualifying, as the team experimented with both wet compounds, despite saturated conditions on track.

Defending World Champion Sebastian Vettel showed what the Red Bull RB10 can do in the wet, running an opening flyer that was a little over half a tenth behind the eventual pole lap of Hamilton. The team miscalculated the timing of his final flying lap, and with his pace in the final two sectors the lap prior, the Champ might have been able to nip Hamilton for pole.

Tomorrow's forecast is for the same type of conditions, which could make for an interesting race.