Hamilton says he's "conflicted" about prior comments on Wolff 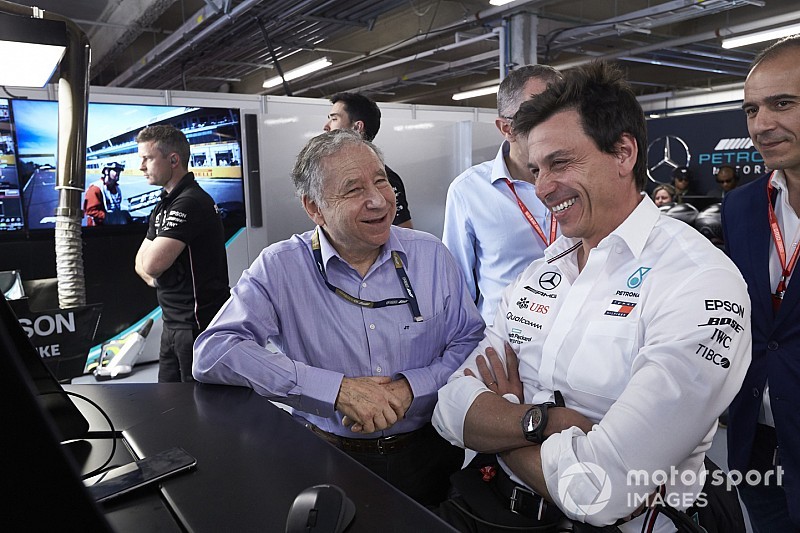 Lewis Hamilton says he now feels "conflicted" over comments he made earlier this week suggesting former team bosses should not be involved in running the sport, because after reflection he reckons someone like Toto Wolff would be an ideal candidate.

The reigning world champion said after the French Grand Prix that he felt it would be better for F1 if it was run by individuals who fans did not think had links with teams.

He cited the example of current FIA president Jean Todt, who used to be team boss at Ferrari, and Wolff, as good leaders but ones who could be viewed by some as not being completely neutral.

But having spent the last few days thinking about what he said, Hamilton actually reckons that the sport is in need of someone like Wolff at its helm – because F1 requires someone with insider knowledge of how things operate.

“I’ve been a bit conflicted the last few days after Sunday night,” said Hamilton ahead of the Austrian Grand Prix. “I haven’t spoken to Toto or to Jean [Todt] but I’ve got a great relationship with Jean. When we did this meeting at the FIA he was so welcoming to us as drivers, to the GPDA and really took on board. I think he’s done such a great job since he’s been in position.

“I’m sure someone else will need to take that role and I was thinking after the race, the best person I know for managing a business, I don’t know anybody else better than Toto. So I felt a bit conflicted because I made a comment but I don’t feel like I probably got out exactly what I was meaning.

“Over these past couple of days I was thinking to myself, you know, bringing someone in that doesn’t know much about Formula 1 is not necessarily the right decision and if you look at people like Toto for example, he’s been in two different teams, he’s also been in a different business before.

"If you could see how this company is managed from the top down I don’t know how he does it. I could never do his job and it’s a good thing he could never do my job as well!”

Hamilton says that having worked for Wolff for many years, he has been impressed by the Austrian's management skills and the way he is able to get the most out of his staff.

“I’m fascinated by how people manage businesses and how you find people, people management, putting people in the right position,” he added. “I don’t know anyone else that is able to do as good a job as him in that respect.

“I obviously know people from outside in different businesses, but even those I don’t think do as good a job as him. But that’s because I’m within the organisation and I see it first-hand.

"I think Toto could do a pretty special job. Would it be better? I do believe it would be better, but that’s just from the experience of working in this organisation and seeing it improve drastically since I’ve been in the team.”

Why F1 must listen to Lewis Hamilton