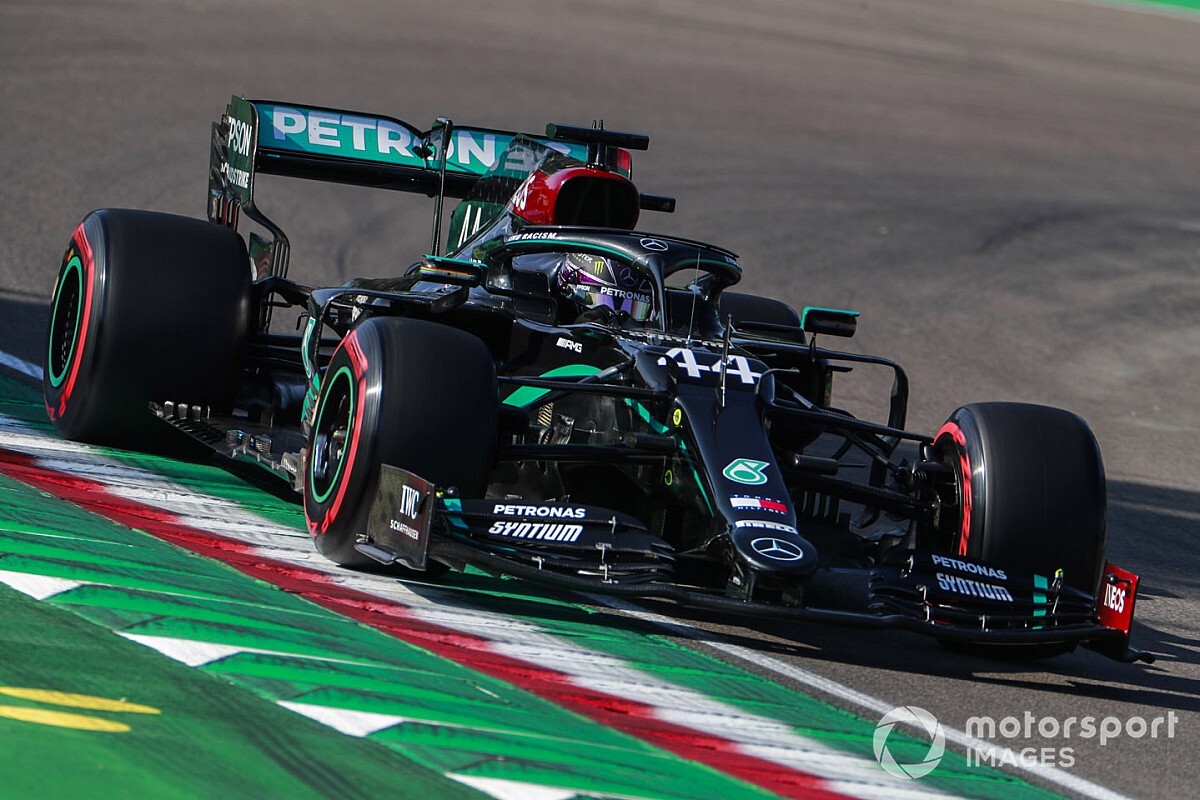 Lewis Hamilton predicts that the Emilia Romagna GP will be a “boring race” - and most of his fellow Formula 1 drivers do not expect to see much overtaking.

The Imola circuit has a single DRS zone on the long run past the pits to the first braking area, but drivers believe it will be hard to follow, and the narrow nature of the track will make it difficult to set up a pass.

All agree that there are no other obvious overtaking opportunities elsewhere on the circuit, and with one stop expected to be the default strategy, there are fears that the race could be a procession.

“What is unfortunate really with this track is that it is so beautiful to drive,” said Hamilton. “But I’m pretty certain you are going to see a pretty boring race tomorrow. You can overtake on this long straight, but it’s quite narrow. And you can’t follow.

“Once you get into Turn 1 there is no single place to overtake anywhere else. It’s going to be a challenge for people following, but as I said the DRS will hopefully give some overtaking opportunities into Turn 1 for people.

“It’s not going to be a great race circuit, that’s for sure. I’d be really surprised if it’s a great race to watch tomorrow – because once you get into Turn 2, you can’t follow. I hope I’m wrong.”

Renault’s Daniel Ricciardo admitted he was relieved to have qualified as high as fifth given the challenge of making up ground.

“I think that probably heightened my feeling after qualifying,” said the Australian. “Knowing that I got the car towards the front, because I do also think it’s going to be a tricky one for overtaking.

“It’s pretty fast but also it’s very narrow, and normally what that also means is for the following car it’s hard to pick a different line to try and get a bit of clean air. So that’s where I think it’s going to make even more challenging.

“Obviously I don’t want to be too pessimistic, but I would be surprised if it’s like Portimao. I don’t think there will be that much overtaking. So the first lap is going to be important.”

Haas driver and GPDA director Romain Grosjean said the issue was not the fault of the circuit.

“I don't think we should blame the track for the lack of overtaking,” said the Frenchman. “We should be looking at making sure that the tyres don't overeat when you slide, that you lose less aero following another car.

“Some tracks would be better. Bahrain is outstanding for racing. Long straight line, a lot of DRS, big braking in the end.

“Here the first corner is fourth or fifth gear, so it's very fast. And obviously if you're not alongside well before the braking, you have no chance.”