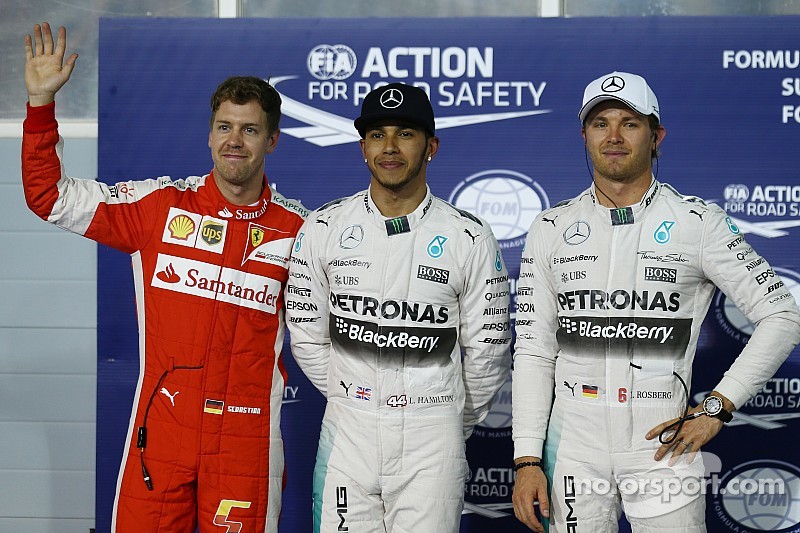 It was the Briton's first pole in Bahrain, and it put an end to Nico Rosberg's streak at Sakhir, the German having taken pole for the past two years.

Hamilton was the last of the drivers to cross the finish line, and stole pole from Vettel, who finished over four tenths of a second behind the world champion.

Rosberg had a disappointing session and will start from third place after finishing half a second behind his teammate.

Kimi Raikkonen completed a strong day for Ferrari with fourth place ahead of the Williams of Valtteri Bottas, who outqualified teammate Felipe Massa.

Carlos Sainz was the best of the Toro Rosso drivers in ninth, with Romain Grosjean completing the top 10 for Lotus.

Sergio Perez qualified in 11th for Force India, the Mexican outpacing Felipe Nasr and Marcus Ericsson as Sauber failed to have a car in the top 10 for the first time in 2015.

Fernando Alonso and McLaren made it into Q2 for the first time this year, the Spaniard putting on a promising showing to qualify in 14th position ahead of the second Toro Rosso of Max Verstappen.

Pastor Maldonado failed to reach Q2 after his Lotus suffered engine problems, the Venezuelan qualifying in 16th position ahead of the Red Bull of Daniil Kvyat, who endured another difficult day in the Renault-powered car.

Will Stevens was the quickest Manor driver again, but three seconds behind Kvyat. Teammate Roberto Merhi qualified 19th, over a second behind, with a time that would have put him seventh on the GP2 grid.

Jenson Button's nightmare weekend continued following the problems he had during the Friday practice sessions, the Briton's Honda-powered car coming to a halt in Q1 before he could even set a time.

The Briton said there was a power cut, his car switching off completely.

Button, who was using the soft tyres right from the start of the session, will start from the back of the grid.