Romain Grosjean's Haas has been disqualified from sixth place in the Italian Grand Prix after his car was found not to be in compliance with the regulations.

Following a protest lodged by Renault about the Frenchman's car immediately after the race at Monza, the race stewards asked the FIA's F1 technical delegate to investigate the case.

A statement issued by the stewards said that the floor of the car was in breach of the rules, as it did not comply with the regulations.

The article mentioned states: "The surface formed by all parts lying on the reference plane must have a 50mm radius (+/-2mm) on each front corner when viewed from directly beneath the car, this being applied after the surface has been defined."

A statement later issue by the race stewards explained that Haas had been requested to make changes to the floor of its car for the Italian Grand Prix, as part of a Technical Directive issued by the FIA in July.

However, with the summer shutdown taking place, the team had asked for a period of grace so it could make changes for the Singapore GP.

While the FIA understood the team’s situation, it told Haas that running an unmodified floor would leave it open to a protest from a rival team: something that duly happened.

The exclusion of Grosjean means that Haas has lost the fourth place in the constructors’ championship that it had taken from Renault with its points haul from Monza.

Haas has appealed the decision.

For the full revised results of the Italian GP, click here. 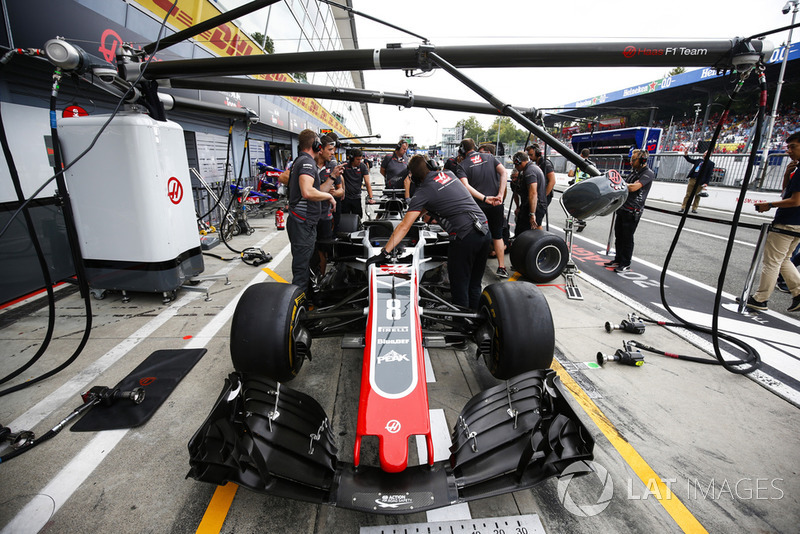 The FIA statement in full…

The Stewards then heard evidence from each team, which in summary was:

Renault submitted that Art. 3.7.1.d of the Technical Regulations of the FIA Formula One World Championship state that a radius of 50mm (+/-2mm) must be applied to each front corner of the reference plane. (See Art.) The text of this Article was being applied differently by several different teams, and a clarification was sought. As a result, TD/033-18 was issued on the 25th of July, 2018 – which, in essence gave the teams until the Grand Prix of Monza to comply with the clarification indicated in the TD.

Renault provided a picture that they claimed was of Car 8, which they stated shows that the part in question, at the start of the Grand Prix of Monza was not in compliance with art. 3.7.1.d of the FIA Formula One Technical Regulations, as clarified with the TD, and therefore they protested against the compliance of Car 8.

Haas submitted that they understood the TD, and that they have been in contact with the FIA’s head of Single Seater Technical Matters. They submitted the email correspondence, which were also provided to the Stewards by the Technical Delegate. They provided details of their new solution and sought acceptance of that solution. In their final email in the chain, they provided both drawings of their solution and stated “Given the forthcoming summer break, we will endeavor to introduce this upgrade for the Singapore GP, but will be somewhat at the mercy of our suppliers so we would request some flexibility in this matter.”

The response from the FIA’s head of Technical Matters did not respond to this point, but did make some technical points, along with general acceptance of the technical solution. Haas submitted that it was their understanding, based on a lack of response on the matter of timing that their solution and timing were accepted.

The Stewards asked questions in clarification of the various points of the teams and permitted the teams to make concluding statements.

The Stewards ordered the Technical Delegate to inspect Car 8, and his report to them (document 40) specified that the car was not in compliance with Art. 3.7.1.d as clarified in the TD.

The Stewards contacted the FIA’s Head of Single Seater Technical Matters, who confirmed the email chain referred to by Haas, but he also stated that in a subsequent conversation with Haas’ Head of Aero and representative on this matter, that he had stated that while he understood their supply problem, that if the car was not corrected by Monza – that they would leave themselves open to protest by other teams.

Haas asked to be heard on additional points, and the Stewards re-convened the hearing.

Haas noted that in their Head of Aero’s email, he proposed a solution and noted that this was as a result of their discussions “on how to best interpret the ambiguity associated with defining the front of the T-Tray.” As such, they noted that until that clarification was given, TD/033-18 remained ambiguous, and that as the TD had not been updated, they did not believe that their car was in violation of the TD.

They further noted, that the time from the TD to the Grand Prix of Monza, taking into account the Summer Shutdown period was only three weeks, which is why it was not possible for them to come up with a solution within the time provided.

The Stewards closed the hearing and considered the matter.

The Stewards determined that, as per the Technical Delegate’s report, the car was not in compliance with Art. 3.7.1.d of the 2018 FIA Formula One Technical Regulations, as clarified by TD/033-18.

As has been noted in previous decisions of the FIA International Court of Appeal, Technical Directives are advisory in nature, but they provide a manner in which a competitor may satisfy the Technical Delegates and the Stewards with proof that their car is compliant. In this case the Competitor did not follow the Technical Directive, and the outboard front corner of the car does not have the requisite 50mm radius.

While the Stewards are also sympathetic to the difficulties of producing these parts, the Stewards noted that at least one other competitor was able to comply in the time provided. Further, it was made clear to the competitor from the outset that the FIA Technical Department did not consider their car to be in compliance, and further that they left themselves open to the circumstances they now find. It was therefore the obligation of the competitor to be in compliance, which they did not do.

The Stewards therefore find the Car to be in breach of the regulation Article 3.7.1.d of the 2018 FIA Technical Regulations as clarified in TD/033-18 and order that Car 8 be Disqualified from the results and that the classification be amended. The Stewards further order that the part in question be retained and sealed by the Technical Delegate until this decision is binding.

Engine not to blame for Ricciardo's retirement