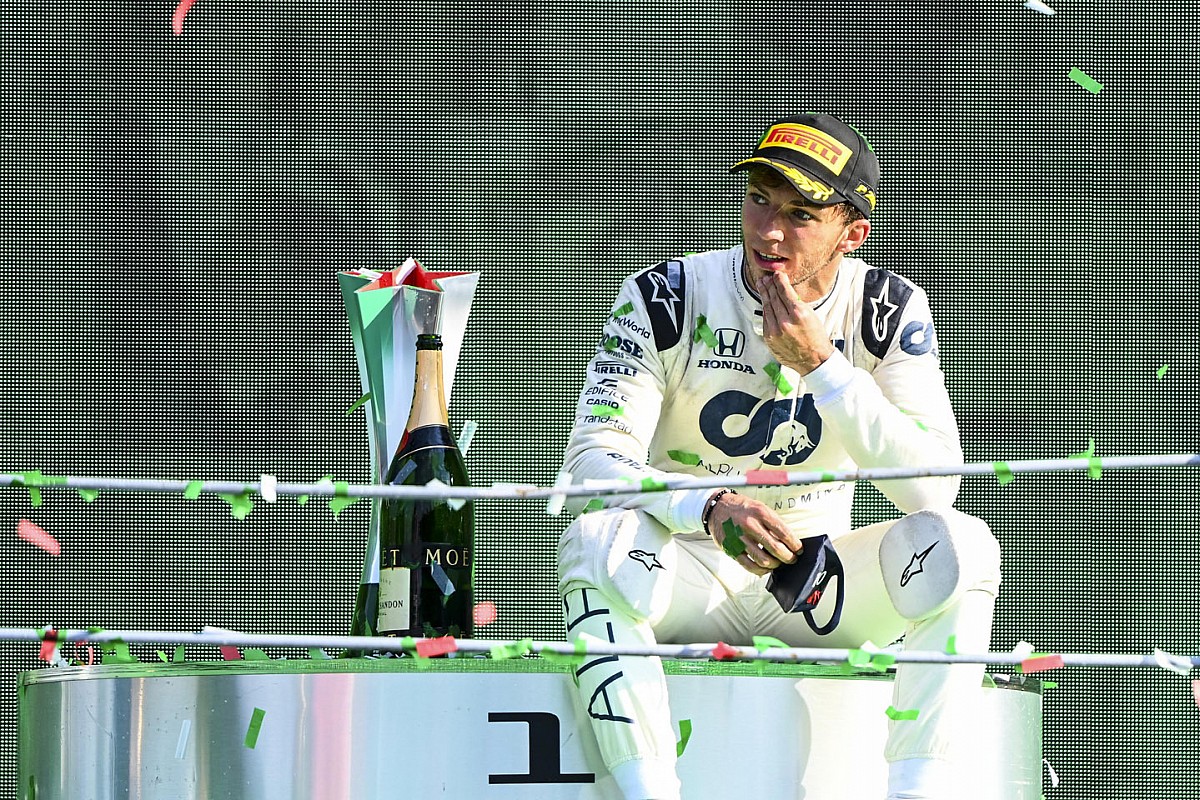 AlphaTauri’s Pierre Gasly revealed that Sebastian Vettel phoned after his Italian Grand Prix victory to congratulate him on joining the “winners' club” for the team formerly known as Scuderia Toro Rosso.

Vettel won the same event back in 2008 at Monza for the ex-Minardi squad, which was at that stage competing in its third F1 season after becoming Red Bull’s junior team.

Gasly’s triumph came 12 years later, with Vettel taking four world titles and 38 further wins in the meantime at the senior Red Bull squad – where Gasly raced for just 12 events in 2019 before his shock demotion back to Toro Rosso after registering a tough run of results.

Gasly was asked what kind of feedback he had been given by Red Bull’s motorsport advisor Helmut Marko since taking his triumph for AlphaTauri, and replied: “At the moment we didn't really have time to talk about all this, Helmut congratulated me in Monza, sent me a text, similar for Christian [Horner]. And, yeah, they were both really happy for my success.

“On what it's going to change for the future at the moment I didn't really think about all these [things] – I didn't discuss anything with them. But obviously in Toro Rosso, as Seb mentioned it to me on Monday when he called me, we're the only two to win with this team, and he won in 2008 and went with Red Bull to win four world championships as we know.

“And I'm really happy to have joined him in this winners' club for this team. We will see what opportunities there will be in the future. But at the moment, I just want to take this time to celebrate with AlphaTauri, with this team.

“We still have many more races to go until the end of the year, and we need to make sure we perform at a very high level and the focus is on that at the moment.”

Gasly also explained how his victory had significantly added to his schedule ahead of this weekend’s race at Mugello, but said he had “no big concerns” about his preparations for the event.

“Obviously I realised that winning a Formula 1 grand prix – especially for the first time – you have quite a lot of solicitations in the coming days and it’s been pretty mental, I must say,” he added. “I’m not going to lie, it’s been very intense – I didn’t really have any time for myself to sit down and even just realise what had happened. But it’s something that happens once in a lifetime – things have to be done and it’s part of my job, and it’s my job to deliver again this weekend.

“I’m well aware of that, I’ve done all my preparations and I’ve trained really hard Monday, Tuesday, Wednesday even though it was really busy. I’m feeling fully ready for this weekend.”